Welcome to spring! However, even with warm, light days ahead, tiredness is an occupational hazard often made worse by alcohol and drug misuse, stress and even the clocks going forward. The good news is that fatigue can be managed like all other workplace risks, writes Jon Herbert. 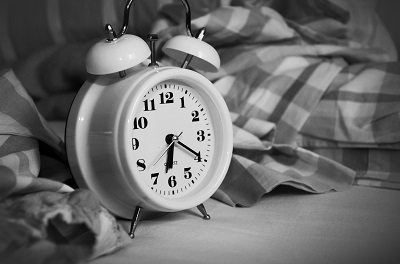 The annual altering the clocks ritual takes place this year at 1am on Sunday, 31 March. Do we add or subtract an hour? Remember: “spring forward and fall back”.

That means “losing” an hour’s sleep and re-learning how to get up early for at least five days a week. Research shows that this shock to the system affects our deep-rooted circadian rhythms. This increases fatigue and puts employees at greater health and safety risk than we might think. Eyes glaze, heads nod — we are not at our 100% best.

Fatigue is a state of feeling constantly tired or weak, whether this is physically, mentally or both. It goes beyond feeling tired, it is also a chronic lack of motivation or energy.

The clocks going forward and upsetting our body clocks is one specific cause of fatigue. Other causes include:

Research has also found that, for many people, work-related fatigue comes on top of record levels of debilitating stress. Some 74% of UK adults report feeling “overwhelmed and unable to cope” at some point during the working year, often linked to physical health problems.

The impact of fatigue

Fatigue is an acute problem for the UK’s 3.5 million public and private sector shift-workers, who are mainly found in health and utilities, transport, manufacturing, the 24-hour energy and chemical industries, modern entertainment and around-the-clock retail.

Memory lapses, absent-mindedness, lower awareness, attention-deficits, reduced ability to process key information and impaired co-ordination are all consequences of tiredness, which is also the primary cause of some 20% of accidents on major roads. Health and safety managers should be aware of the impact of fatigue: it can decrease productivity while increasing work absence, accidents and injuries. Boring and repetitive tasks can increase fatigue.

However, fatigue can be managed like any other hazards.

In fact, employers have a legal duty to manage fatigue risks, even if individual employees want to work extra hours, or switch their shift patterns for social reasons. Useful tools include the HSE’s “fatigue risk index”.

Employers are recommended to consult with employees and explain why certain working hours and shift patterns could be unhealthy. Cooperation is more productive than conflict. It is then important to monitor and enforce decisions with a robust system from which data can be retrieved easily.

One other problem many employers may need to consider during a period of business uncertainty is whether they are under-resourced beyond a point where balancing and juggling shifts is reasonable. This can include questions about specific workloads, shift lengths, starting and end points, the direction of shift rotations, plus the frequency and length of breaks.

It is vital to remember that sleep disturbances can cause “sleep debt”, particularly for night workers whose daytime sleep is lighter and more vulnerable to noise and the natural resistance to sleep during daylight hours.

The impact of chronic stress on the body can cause fatigue. Late last year HSE statistics found that debilitating stress and mental health problems among UK workers had reached the highest levels for 17 years (as reported in the IOSH magazine).

The figures taken from the annual Labour Force Survey produced by the Office for National Statistics showed that, on average, people under stress or dealing with a mental health problem caused or made worse by their employment, are taking longer to recover.

Alcohol and drugs and fatigue

One other fatigue-related factor is alcohol and drugs misuse. A February 2019 survey by Drug Scope and Alcohol Concern for the TUC found that 60% of employers report staff drinking concerns.

The TUC is adamant that neither drugs or alcohol are acceptable in the workplace other than for prescribed medical conditions but points out that they are often used by workers to try to counter stress.

Also in February, the HSE issued new guidance on alcohol and drugs at work, pointing out that both reduce productivity while increasing time taken off work and accidents. Particular reference is made to driving and duties under the Road Traffic Act 1988 and the Transport and Works Act 1992.

The HSE encourages employers to adopt a drugs and alcohol policy in consultation with staff that includes how employees are expected to limit their drinking, how problem drinking will be recognised and help extended, plus when and how drinking will be treated as a disciplinary and not just a health problem. See your Drugs and Alcohol topic.

The NHS lists 10 medical reasons for feeling tired or fatigued, noting that tiredness can often be relieved by sleep and rest while fatigue cannot. These include the following.