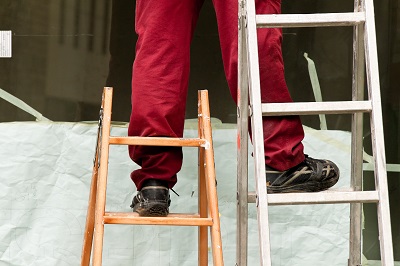 The Work at Height Regulations 2005 (WHR) cover any place from which a person could fall and suffer personal injury. They apply to all places of work. Working from a ladder or a stepladder clearly falls within the concept of work at height.

A ladder can only be used at height if a risk assessment has found that the use of more suitable work equipment is not justified because of the low risk. Use of ladders must be of short duration. Ladders must:

In the recent Scottish case of McCourt v Chivas Brothers Ltd (2020), M was employed by C as a warehouse operative. He was told to help with the loading of a vehicle with barrels of whisky. The floor of the warehouse was not level and loading had to be adjusted to make sure that no barrels rolled from the vehicle. The vehicle was placed on a ramp which meant that the ladder used for loading was higher off the ground than when it was used on a flat surface. After the loading, M came down the ladder and injured his back when his foot was on the lowest rung. He stated that the pain in his back happened when he lowered his foot to the ground and realised that it was not coming into contact with anything. Medical evidence stated that M had stated that the pain happened when his foot came down unexpectedly on lower ground. An unexpected drop of 26 inches (some 66cm) from the bottom of the ladder resulted in a severe jarring injury to M’s lower back. The medical expert agreed that this could have caused the injury.

C’s safe system of work did not specifically address the height differential arising from the use of metal ramps for the loading process. The relevant HSE guidance states that steps and ladders should have the first rung or step positioned so that it can be easily reached, ideally approximately 40cm from the ground and no more than 70cm.

M claimed compensation for his injury on the basis that the evidence showed a failure to take reasonable care to provide a safe system of work and safe plant and equipment.

It was found that M’s evidence at the trial did not confirm this version of events. He could not prove negligence on the part of C. Even if there was evidence of negligence, most of the evidence indicated compliance with HSE guidance for gaps between ladder rungs and the ground. His evidence was described as confused and contradictory.

The Scottish court found that the act of stepping off the bottom rung of the ladder carried with it no obvious risk. The evidence was inconsistent and M had failed to prove that any negligence on the part of C was causative of the injury which he suffered.

A case with broadly similar facts is Bhatt v Fontain Motors Ltd (2010). B was employed by F in F’s garage. Car bumper kits were stored in a loft space to which access could only be gained through a ceiling panel by climbing a long ladder. F had put in place a system for using the ladder which stated that the ladder must be footed when in use. B climbed the ladder without waiting for it to be footed. He fell and was injured. He claimed compensation from F.

At first instance, his claim succeeded subject to a reduction of one-third for contributory negligence. The judge ruled that F had been in breach of WHR. A pull-down ladder would have been more appropriate.

F appealed to the Court of Appeal on the basis that B had been wholly to blame for the accident. That court dismissed the appeal and made the following points.

In March 2020 a Northamptonshire painting and decorating employer was sentenced after an employee sustained serious, life-changing injuries after falling from height. Wellingborough Magistrates’ Court heard that, on 7 August 2018, an employee of Ian Ramsay was severely injured when he fell from height while installing a roof ladder on a pitched roof at a property in Mawsley, Northamptonshire. The fall resulted in the employee being permanently paralysed from the chest down. The homeowners had hired Mr Ramsay to paint the exterior windows and soffit boards of their property, including the painting of dormer windows within their roof. The employee was in the process of setting up ladders to access the dormer windows when he fell from height.

An investigation by the HSE found that the incident could have been prevented if the work at height hierarchy had been followed in the planning process and if appropriate equipment had been provided to employees, such as fully compliant scaffolding. The risk assessment should have identified that this work was not short duration and that the use of ladders was not appropriate.

Employers and those in control of any work at height activity must make sure that work is properly planned, supervised and carried out by competent people. This includes using the right type of equipment for working at height.