Gudrun Limbrick considers whether reporting stress and anxiety about work is inevitably going to be seen as an admission that your job is not the right one for you. 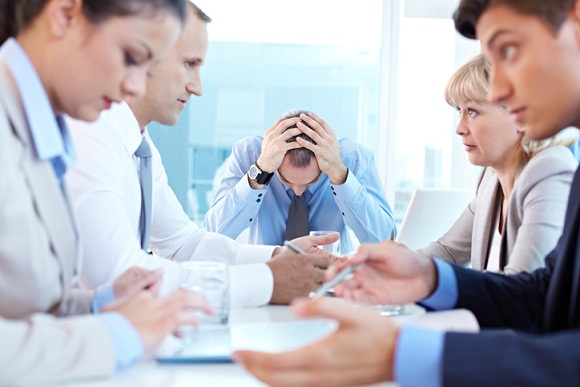 It is very rare, as someone who writes about human resources and employment issues, that I ever get to shout out “hold the front page!”. In fact, to be honest, it has never happened and, as front pages are being rapidly usurped by home pages and Twitter feeds, it will now probably never happen. However, this article has brought me pretty close.

The whole issue of reporting stress and anxiety at work is not one that brings very much good news. But something happened which could be a game-changer — it is certainly very good news. And it came from one casual tweet. What you are reading now is a very different (much more optimistic) article than I would have written only a few days before the tweet.

The tweet, from @madalynrose, clocked up around 45,000 likes and nearly 17,000 retweets, which is remarkable because it is not a funny joke or juicy celebrity gossip — it is about mental health in the workplace. The tweet was a retelling of an exchange between Madalyn and her boss at her place of work, an American software company called Olark.

Madalyn sent her colleagues a message saying: “I’m taking today and tomorrow to focus on my mental health. Hopefully I’ll be back next week refreshed and back to 100%”. Her CEO’s reply was as follows: “I just wanted to personally thank you for sending emails like this. Every time you do, I use it as a reminder of the importance of using sick days for mental health — I can’t believe this is not standard practice at all organisations. You are an example to us all, and help cut through the stigma so we can all bring our whole selves to work.”

Not only has this remarkably positive, common sense approach to mental health been liked and retweeted thousands of times, it has also been reported in the media in the USA as well as, to some extent, the UK media. As such, it has to be one of the biggest steps forward in how we deal with mental health in the workplace for a very long time.

Recent research from Business in the Community (BITC) found that 77% of employees have experienced symptoms of poor mental health at some point in their lives. This could be anything from stress to suicidal behaviours, addiction to migraines and everything in between.

The symptoms are often mental, but can also have physical repercussions, and there are also financial implications. Acas reports that mental health problems cost UK employers £30 billion a year. These costs come from absenteeism — mental health problems can bring with them lengthy periods of absence, the costs of recruiting new staff to replace those who have left because of stress, but also the less tangible costs of having staff members who are not able to work at full capacity because of their unsupported mental health issues or those who are in teams experiencing low morale because stress levels are too high.

The Centre for Mental Health has estimated that companies could reduce the cost of mental health by a third by bringing in improvements in the way that mental health is dealt with in the workplace and the manner in which employees are supported.

The first step, for any manager or team leader, in supporting any member of staff who has an issue with mental health is knowing that such an issue exists. The delicacy of the situation dictates that this information has to be first-hand rather than the individual’s issues being reported to the company by someone else who has suspicions or is reporting gossip.

The reasons for this non-disclosure appear to be two-fold. The first is that there is a suspicion that telling the line manager would achieve little (and this suspicion may prove right in many cases, as only 22% of line managers reported having received training in this very difficult area) and the second is that there might be a negative impact on how the individual is perceived, treated or assessed for future promotion.

Mental health is rarely an easy issue to tackle in any situation. In the workplace, it is even more difficult as there is pressure to get an individual or team back to full productivity quickly and there is the issue of supporting the whole team through something that can be very difficult for them, too.

Being around someone with mental health issues can impact on all of us in different ways. Even knowing the right words to use can be difficult and this can stall even the most basic of discussions. For these reasons, it is unreasonable to expect managers and team leaders to simply know how best to raise the issue of mental health with their team or to immediately know how to support an individual.

For organisations wishing to improve how they deal with mental health in the workplace, there are many sources of information and training. Acas (offering help and advice for employers and employees on a range of different issues) is a good place to start. It has a booklet Promoting Positive Mental Health at Work, which is invaluable. It also runs training courses.

Returning to Madalyn’s exchange with her CEO, the strength of it was her openness that depression or stress is a real issue warranting a couple of days off. Her time off may have prevented the problem becoming serious.

We all get stressed at work, if nothing else, so it is good to be able to say that openly. Her boss’s reiteration of the value of this was very supportive, not only to Madalyn but to all her colleagues. I can only assume that this exchange has meant that mental health was a topic of conversation in their place of work in a healthy and positive way as a result.

The problems with mental health at work may be costing untold misery for thousands of employees and a £30 billion hole in company budgets, but the solutions are remarkably simple: talk more, take the time to understand, offer support where it is needed. And maybe just one tweet will be the starting point for many companies.

If you need help on mental health and wellbeing issues, Health Assured offers the most comprehensive employee assistance programme (EAP) available today. Health Assured high quality counselling and specialist work–life support is delivered through an in-house team of 60 BACP accredited counsellors, supported by a network over more than 1650 active counsellors across the UK, with access to a further 4500 BACP counsellors. Their specialist service supports 9 million people throughout the UK, handling over 300,000 calls a year.