The 2020s are upon us, marking the end of an era of intense political, economic and social change in the UK, as well as a time of major shifts in the most significant issues affecting the workplace. Vicky Powell considers what safe and healthy working will look like in 2030, based on the key predicted drivers of transformation over the next 10 years. 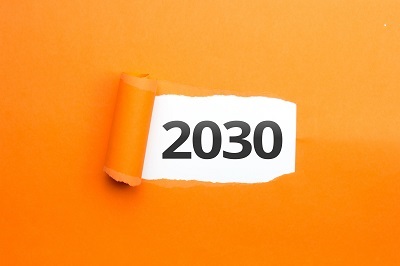 Where are we right now?

At the end of October 2019, the Health and Safety Executive (HSE) released its latest annual statistics, warning that the number of injuries and incidents of ill-health in workplaces across Britain remains still too high.

The figures highlighted the following for the period 2018/2019.

All of the above came with an estimated economic cost to Britain of £15 billion.

The elephant in the room

Examining the above figures, it is tempting to focus on the short-term changes from one annual period to the next, such as the troubling rise in fatal injuries at work from 135 to 144 and then most recently to 147, but to do this is to risk overlooking the elephant in the room of Britain’s workplaces — work-related health and, more specifically, lung diseases.

This is because the above list of bullet points largely (although not entirely) overlooks the most important figure of all.

The above points focus on working people, and rightly so, given that a snapshot of the current state of health of the British workforce is extremely valuable.

However, according to the HSE, every year in the UK, approximately 13,000 people die from occupational diseases as a result of past exposures to hazardous substances. These diseases — which are often long latency conditions that manifest only decades after exposure — include cancer and lung-related illnesses such as chronic obstructive pulmonary disease (COPD), an umbrella term which includes conditions like chronic bronchitis and emphysema.

In this context therefore, when we look again at the latest figure of 147 fatal injuries at work, it is clear that every year in the UK, 99% of work-related deaths are caused by occupational diseases, and just 1% by fatal accidents.

In order to achieve safe and healthy working in 2030, the 13,000 deaths caused each year by occupational diseases will need to be placed firmly at the very centre stage of health and safety policy planning and policy.

Certainly, the British Occupational Hygiene Society (BOHS) has been at pains to highlight these critical figures to employers, workers, the Government and other decision makers.

The Chartered Society for Worker Health Protection has also challenged employers to look more closely at the exact nature of work-related ill health: the HSE estimates that some 12,000 deaths each year are caused by lung disease due to past exposures at work. This effectively means that 90% of the estimated 13,000 work-related deaths in Britain each year are caused by respiratory hazards causing conditions such as mesothelioma, COPD and lung cancers.

In the interests of tackling this burden, BOHS launched its Breathe Freely campaign in 2015, aimed at preventing occupational lung disease in industry.

The very same issue has been approached from a slightly different perspective by the Institution of Occupational Safety and Health (IOSH) via its No Time to Lose campaign which was launched in 2014 and focuses on work-related cancers.

The HSE’s latest statistical publication on occupational cancers in Britain quotes annual figures of about 8000 cancer deaths and around 13,500 new cancer diagnoses linked to past occupational exposure (although these are not specifically linked to the 2018/19 period but to earlier years).

It is true that many of these deaths (more than 5000 according to the latest HSE estimates) will be asbestos-related and it is hoped that as the UK’s asbestos bans and good practice working controls take full effect, workers will be better protected, both currently and in future, leading to long-term declines in these numbers.

In this regard, the HSE has predicted that annual numbers of asbestos related lung cancers — identified as the legacy of widespread industrial use of asbestos between the 1950s and 1970s — will continue at current levels for the rest of this decade before starting to fall.

However, the HSE has previously anticipated earlier falls which have not yet materialised. Clearly, there is no room for complacency over occupational respiratory hazards in the next 10 years.

In the face of this appalling death toll, words like worker wellbeing can be written off as trivial in comparison, with sceptics questioning the value of fruit in the staff canteen, mindfulness sessions and workplace running clubs. However, this shouldn’t be the case.

Responding to the new HSE statistics, the health and safety professional body IOSH noted that total annual cases of work-related stress are at an 18-year high, with more new cases reported than the previous year.

In 2018/19 some 602,000 workers were suffering from work-related stress, depression or anxiety with 12.8 million working days lost as a result, representing substantial human and quality of life impacts, as well as economic cost to employers, employees and the UK economy.

IOSH notes that factors such as workload, lack of support, violence, threats or bullying and changes at work are believed to be the main causes of work-related stress, depression and anxiety.

Furthermore, the health and safety professional body recently re-emphasised, all employers have a legal duty to protect employees from work-related stress by assessing the risk and taking action to remove or tackle it.

Richard Jones, Head of Policy and Regulatory Engagement at IOSH, said: “Forward-looking organisations are already taking positive action on mental health at work and seeing the many benefits. So, it’s disappointing and concerning to see such high numbers of work-related stress, depression and anxiety cases. Employers should review their prevention and training strategies and ensure they’re providing sufficient support for their workers, particularly in these uncertain economic times.”

Looking again at the second biggest cause of lost working days in Britain — namely MSDs, which account for 29% of working days lost, totalling nearly half a million (498,000) new or long-cases in 2018/19 — the HSE estimates the main cases of work-related MSDs are:

The European Agency for Safety and Health at Work (EU-OSHA) recently announced that its new three-year Healthy Workplaces campaign, running from 2020 to 2022, will focus on MSDs with the slogan Healthy Workplaces Lighten the Load. Figures from the Agency indicate that three out of every five workers in the EU report MSD complaints, proving that UK’s challenges with MSDs extend to Europe also.

So, far from being lightweight considerations, it is reasonable to expect that wellbeing issues such as work-related stress and neck, joint and back pain will continue to hold back Britain’s workforce and its companies in the 2030s, unless they are given the Board-level attention they deserve now.

Certainly, on the regulatory side, employers should be aware that the HSE’s ongoing Go Home Healthy campaign is firmly focused on the three key issues of the musculoskeletal health of workers, work-related lung diseases and stress.

A recent paper, entitled What will occupational health and safety look like in 2030?, from the risk specialists the International SOS Foundation, looked at the leading causes of expected change in the safety, health and environmental world in 2030 and predicted the following.

Dr Mark Parrish, Senior Medical Ambassador at the International SOS Foundation, said: “There is no doubt that there is a busy time ahead for HSE professionals. New regulation and standards are always going to cause some growing pains. If businesses succeed in finding the best practices for them, while adhering to new global standards of health and safety, the future looks bright”.

He added, “Significantly, because of the increasing complexity HSE professionals face, many believe the topic should find its way to the boardroom.”

The working landscape will undoubtedly change in many ways over the next 10 years. Flexible working, an ageing working population, climate change and concerns about pollution, as well as technological changes such as rapid digitalisation, challenges associated with the gig economy and increasing use of robots at work will all transform how people work.

To paraphrase Heraclitus, it might be said that the only constant in Britain’s working life in the coming decade will be change. Embracing this transformation, specifically with a far greater focus on worker health protection, will go a long way to ensuring safe and healthy working in 2030.