Vaping has dramatically risen in popularity in recent years and is promoted as an aid to quitting cigarette smoking in the UK. Consequently, employers need to ensure they set out clear policies in order to deal with e-cigarettes in the workplace, particularly as evidence suggests vaping is less harmful to health than smoking. Vicky Powell examines the work-related health implications of these trends and a new Scientific Opinion from the European Commission. 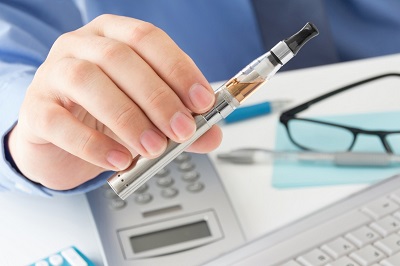 According to figures published by the anti-tobacco charity, Action on Smoking and Health (Ash), in October 2020, an estimated 3.2 million adults in Great Britain currently use e-cigarettes, up from 700,000 in 2012.

Indeed, Ash says the main reason given by current vapers for use of e-cigarettes is to help them stop smoking.

The advice from international health authorities is unequivocal: although not without risks, vaping is a much healthier option than smoking.

At the end of 2018, Public Health England (PHE) launched a new Health Harms campaign to convince the UK’s smokers that vaping was better than smoking and a good way to quit. The NHS promotes them as a way to stop smoking, stating that e-cigarettes “carry a small fraction of the risk of cigarettes” as they do not produce tar or carbon monoxide, two of the most harmful elements in cigarette smoke.

In a move which may be helpful to managers responsible for facilitating employee quit-smoking programmes in the workplace, as part of its Health Harms campaign PHE released a film on YouTube highlighting “the devastating harms that come from smoking, and how this can be avoided by switching to an e-cigarette or using another type of quit aid”.

A recent report sounds a further note of caution. Following a request from the European Commission, which is considering whether it needs to revise the Tobacco Products Directive (2014/40/EU), the Scientific Committee on Health, Environmental and Emerging Risks (SCHEER) provided a Final Opinion on e-cigarettes in June 2021. This focuses on the health impacts of vaping in comparison to non-smoking. The Committee was asked to review the most recent scientific and technical information on e-cigarettes and to study the health effects of vaping, and its role in encouraging people to start or quit smoking.

The Committee found moderate evidence for risks of irritative damage to the respiratory tract of vapers — and those exposed to second-hand smoke — and for long-term systemic effects on the cardiovascular system, although the evidence for e-cigarettes being carcinogenic in the long term was weak to moderate.

E-cigarettes fall outside the scope of smoke-free legislation, which means that employers can choose whether to allow employees to use them at work or not. However, Acas warns that whatever the policy, employers should be clear about the rules.

In deciding what to do about e-cigarettes in the workplace, it is work acknowledging that they are often used as an aid to stop smoking, so the implications of banning them should be carefully considered. However, you would need to take into account the effects on other members of staff.

Hugh Robertson, Senior Policy Office for Health and Safety at the TUC, said, “We need workplace smoking policies that benefit all the staff. The bottom line is that if vaping helps people quit smoking then we should encourage and support them, but, at the same time, we want our workplaces to be free from all fumes that can potentially make us ill. That is just as much the case with the fumes from e-cigarettes as with other chemicals, especially as the long-term health risks are still unknown.”

Acas suggests employers could include a paragraph about e-cigarettes in the existing policy document on smoking, drugs and alcohol, following consultation on any changes with employees and their representatives.