Growing interest in Halloween in foreign markets is contributing towards a major UK fancy dress company’s aim to double its export sales over the next five years. Sue Fenton reports.

Belfast-based wholesaler Palmer Agencies, which specialises in Halloween products, is predicting some retrenchment in the UK and Irish markets this year after several years of growth, with consumers each spending up to 40% less on Halloween products.

This is partly due to the economic environment and partly to what marketing director Sergio Mr Battaner says is “saturation” of the home markets after several years of rapid growth.

But interest in Halloween is still growing in overseas markets, notably Germany, France, Spain and Portugal, and the company is focusing more of its efforts on targeting such markets.

The family-owned business offers a wide range of fancy dress for all occasions and is particularly known for its accessories and props — ranging from wigs to vampire fangs, theatrical make-up to fake pumpkins, rubber vampire bats to ghoulish latex masks.

“We have the Americans and their films to thank for the growth in popularity of Halloween,” says Mr Battaner. “However, though we think of Halloween as an American idea, it actually has roots in the Celtic culture. The English have really embraced it over the past five or six years and until recently we have been focused on developing our business at home, so we haven’t thoroughly explored the possibilities for international trade.”

Now, he adds, the company is looking in more depth at the opportunities presented by export markets.

“There’s always been an interest in the gothic in Germany, for instance, and our products are very well received there. And the tradition of Carnival across much of Europe means a ready-made market.”

Product is manufactured and packaged mainly in China and Vietnam — though some is made in Italy (carnival masks), France and the US (make-up). Much of the product and packaging is produced to the company’s specifications — though Palmer also acts as an agent for some other suppliers. Most product is shipped to Northern Ireland and then on to customers, though some goes straight from the factories FOB to customers within China.

Mr Battaner says some of the bigger customers who could buy direct from the Chinese suppliers prefer to buy from Palmer instead, for its “one-stop shop” range of goods. The prices in this case to the customer aren’t necessarily a great deal higher, says Mr Battaner, because much of the cost of the return journey of the containers is built into the inbound leg.

The top export markets are Spain, Norway, Sweden, Germany, France and Italy, all of which are seeing significant growth in Halloween.

Export sales value has doubled in the past few years and currently makes up around 10–15% of total sales (40–45% including the Republic of Ireland).

“We know the market is growing — what we don’t know just yet is exactly where that growth will take us as a company,” says Mr Battaner. He does, however, expect export sales value to double again in the next five years, a far faster growth than sales as a whole.

Because of the well-entrenched Mardi Gras carnival tradition in mainland Europe and Brazil, consumers there are already used to the idea of dressing up and partying, and thus offer great potential for Halloween costumes, to use both at Halloween and during Mardi Gras itself. The Roman Catholic tradition around Mardi Gras means people in those countries already have a licence to dress up and have fun once a year. While Mardi Gras as such isn’t growing, it’s growing for us because of our increased international focus.”

Mr Battaner thinks the British market has reached saturation point after several years of rapid growth. Halloween has fallen at a weekend for the past few years but this year will be on a weekday, potentially reducing consumers’ enthusiasm for organising parties. This, combined with the economic situation, is likely to see consumers spending less on fancy dress outfits (though more on accessories), meaning total overall average spend per person likely to fall to about £35 from last year’s £60.

“But in countries that don’t have the same economic constraints, and where Halloween is becoming more and more accepted as a party occasion, we expect to do well,” says Mr Battaner.

The company promotes itself to foreign markets partly through its website, which takes several new leads each month, and partly through a presence at international trade shows in Hong Kong and the US. It used to exhibit at the Nürnberg Toy Fair but now prefers the Spring Fair at Birmingham instead, which is attended by many of the same foreign buyers anyway.

Mr Battaner says the export sales strategy is built around value for money rather than price as such. “It’s unlikely that we would be the cheapest in a particular market — and anyway a business whose only point of differentiation is price probably wouldn’t stay in business for very long. Our approach is quality of product and customer service.”

Palmer Agencies already works with about 20 factories but will consider new suppliers. These are identified by local agents or via the management’s annual visits to the Far East.

Mr Battaner says the Chinese producers self-police satisfactorily when it comes to quality control, but adds, “We quickly find out if anything is defective by checking the stock when it arrives, and the factories know it. On one occasion the tights were missing from a consignment of fancy dress. We pointed it out and the tights were here within a fortnight.”

The export of Halloween products involves fewer cultural issues than one might expect, says Mr Battaner. “These products are fairly universal — everyone who celebrates Halloween uses witches, pumpkins and bats, for instance. We don’t need to ‘translate’ the product.”

The same applies to the generic fancy dress, with the skimpy and sexy costumes selling across the board, even — perhaps surprisingly — in the Middle East. “We sell to the expats, of course, but also to the local communities. They might dress conservatively in public but once they’re in their homes it’s different. They don’t ‘do’ Halloween but they certainly ‘do’ fancy dress parties.”

One recent surprise, says Mr Battaner, was the company’s Jedward wig — a parody of the quiff hairstyles of the Irish twin singers John and Edward Grimes, who represented Ireland this year in the Eurovision song contest. “We knew it would sell well in the UK and Ireland but we were taken by surprise by how popular it was in Sweden. Of course, the Swedes love anything to do with Eurovision.” 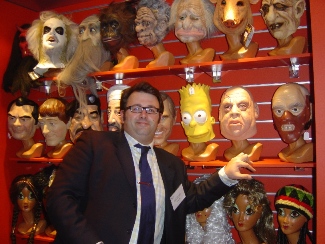