The Government’s overall objectives do not fit with the UK’s environmental protection metrics and are not given due consideration in decision-making, according to a recent report from the National Audit Office (NAO). The report shows that cross-departmental action on environment isn’t working as it should. John Barwise explains what’s going wrong and how environmental performance can be fixed — with the right approach.

In 2015, the NAO published the Environmental and Sustainability Metrics which raised serious concerns about some of Government's environmental data and its alignment with government policy objectives, and whether there were sufficient mechanisms for action if performance was poor — four years later and little seems to have changed.

The latest NAO report, Environmental Metrics: Government’s Approach to Monitoring the State of the Natural Environment, does give credit to the Government’s progress on developing metrics to report against the UN’s Sustainable Development Goals, and describes the UK’s Climate Change Act 2008 as a “robust framework for measuring progress on climate change mitigation and adaptation”, including metrics performance on greenhouse gas emissions.

However, the report is critical of what it calls “a patchwork of metric sets” that do not clearly fit with Government’s overall objectives or even with each other. The NAO also raises questions about whether current metrics are used effectively by government departments to inform decision-making in practice.

The Government collects and reports a wide range of environmental data, but there are important gaps in the ability of some departments to measure, monitor and report on their environmental performance metrics.

Packaging — On packaging recycling, for example, the Department for Environment, Food & Rural Affairs (Defra) has failed to address important questions about risks and value for money when reviewing performance against key performance metrics such as packaging recycling rates. Instead, Defra relies on packaging recovery notes (PRNs) from reprocessors and exporters for data which the NAO says leaves the system open to fraud and error, with a particular risk that some exported material is not recycled.

Air quality — For air quality metrics, the NAO analysis showed that while the UK has clear performance metrics measuring air quality goals (ie reducing levels of pollutants in the air), it does not have a comprehensive set of supporting metrics on policy “outputs”, to provide a more immediate assessment of the progress of individual policies designed to achieve these goals. Analysis also found that there was no clear single responsibility within Government for knowing whether the initiatives undertaken by various departments form a coherent portfolio that delivers good value for money for air quality.

Renewables — One of the Government’s flagship schemes, the Renewable Heat Incentive scheme, managed by the Department for Business, Energy & Industrial Strategy (BEIS), was introduced to encourage a switch from fossil fuel heating systems to renewable and low-carbon alternatives in homes and business premises across the UK. And, while BEIS actively promotes low-carbon energy options, it does not have specific goals or clear milestones to monitor progress for one of the scheme’s primary objectives, namely to develop the supply chain and support the roll out of low-carbon technologies.

Government needs effective systems for measuring its environmental performance in order to understand whether it is on track to meet its own long-term environmental goals and to assess whether its existing policies will fulfil the UK’s international obligations.

This is particularly the case as the UK prepares to leave the EU when the Government will need to set up a range of additional environmental performance measurement and monitoring processes that are currently provided by EU institutions.

Defra’s plans for a new group of performance indicators to measure progress against its 25-Year Environment Plan could help. These metrics aim to give an overview of the health of the natural environment, including the quality of air, water and wildlife diversity, and help monitor progress against Government ambitions “to improve the natural environment within a generation”. It should also help highlight potential interactions across government departments and between different policy areas.

Defra has yet to set out expectations for the scale of improvement it expects as measured by each metric over the short and medium term. Less than one-quarter of the 44 targets in the Environment Plan are specific, measurable and time-bound. Defra will also need to establish clear expectations for the contribution of all parts of Government to improving performance as measured by these metrics.

However, Defra has not yet done enough to engage other parts of Government on what it intends to do, nor has it set clear accountabilities for performance, according to the NAO report. This is despite the Departments for Transport (DfT), BEIS, Communities and Local Government (DCLG) and even HMRC, all having a significant impact and influence on the UK’s environmental performance. 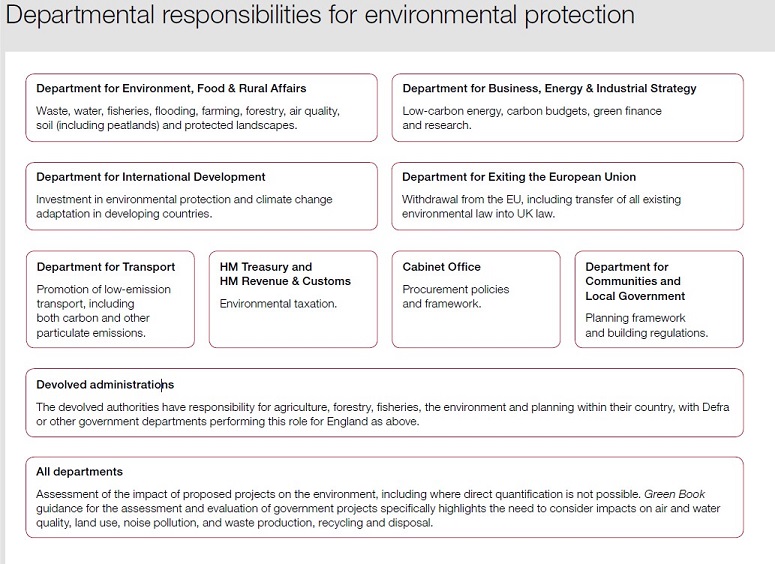 A new environmental watchdog will be established to fill the “governance gap” after the UK leaves the EU, given the role that the European Commission has played in holding Government to account for environmental legislation.

The draft Environment Bill would establish the watchdog as the Office of Environmental Protection (OEP), with an obligation to publish an independent annual progress report on implementation of the 25-Year Environment Plan. OEP will also be able to set up its own strategy, with powers to investigate the compliance of public authorities with environmental law, issue formal compliance notices and to apply for judicial review.

OEP will be funded through Defra, with a Chair appointed by the Secretary of State for Defra. While in principle this is not incompatible with it being functionally independent it could bring risks for its independence in practice, or for its perceived independence.

The NAO auditor general, Amyas Morse, said performance data and transparent reporting is essential for Parliament and the public to hold Government to account. “Government’s new system of environmental metrics could transform its approach. The critical tests will be whether all parts of Government actually use this information to monitor progress and take action, and whether the new environmental watchdog has the ‘teeth’ to play its part effectively.”

To be effective in holding people and departments to account, OEP will need to have access to goodquality environmental data, and to set clear expectations over how it will use these data to determine whether and how to intervene if performance is not on track. It will also need appropriate resources and strong leadership.

There is no clear, single point of ownership for performance as a whole across Government on the 25-Year Environment Plan, the NAO report points out, and more work is needed to embed environmental metrics into Government’s core planning and performance monitoring.

The NAO report raises a number of serious issues that could undermine the Government’s longer-term environmental performance, including those outlined in Defra’s 25-Year Environment Plan.

Environmental performance should be at the heart of government policies and central to all departments’ decision-making processes. Goals and objectives need to be clear, with appropriate arrangements for reviewing performance data, and mechanisms for ensuring that action is taken if performance is poor.

Equally, environmental metrics must provide a fair, accurate and timely reflection of performance, accepting that a balance needs to be struck between what is ideal and what is possible, available and affordable. Organisations need to carefully consider the cost–benefit case for metrics, ensure quality and timeliness is “good enough” for the circumstances, and be transparent about any caveats and limitations of all metrics being considered.

Finally, the NAO report argues that accessible public reporting on performance information is needed to allow stakeholders to test and challenge the conclusions that decision-makers draw from their environmental performance. This approach can also help engage citizens with any behaviour changes required to meet environmental policy objectives.

Summarising its findings, the NAO report concludes that, while significant challenges still need to be overcome, the Government’s initial, “whole system” approach is encouraging.

“A critical test will be whether there is strong ‘whole of government’ ownership of the new framework of metrics, with all parts of Government actually using this information to monitor progress and take action if performance is not improving as quickly as expected,” the report concludes.