In this feature article, Caroline Raine discusses some of the emerging battery technologies, namely sodium batteries, and how these can be transported safely using the new multilateral agreement M340.

Like lithium batteries, sodium ion batteries (NIB) are rechargeable batteries using sodium ions (Na+) as the charge carriers instead of Lithium (Li+). The technology is pretty much identical with sodium compounds being used instead of lithium compounds.

Lithium-ion batteries are deemed to have high environmental impacts whereas sodium is naturally occurring and is in abundance. Meaning they could be much cheaper and better for the environment.

France was the first country to sign it in July 2021, followed by Germany, the United Kingdom and Belgium in August 2021.

To be able to do this, there are a few other requirements that must be followed. For example, construction and testing requirements as outlined in the multilateral agreement.

No UN number needs indicating in the transport document and the proper shipping name used in the document shall be, as appropriate:

“Sodium-ion” should be read in place of “Lithium-ion”.

SP 188 exempts lithium batteries from other provisions of the code; however, shipment must meet the following provisions of SP 188:

SP 188 of Chapter 3.3 shows that lithium cells and batteries meeting the provisions of SP 188 shall be marked with the new lithium battery mark, see Figure 1 below. 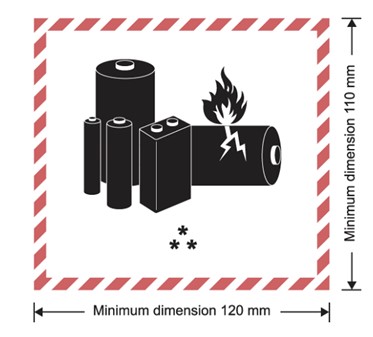 This marking requirement does not apply to:

Lithium cells and batteries may be carried under this entry if they meet the provisions of 2.2.9.1.7 — which refers to testing criteria and quality management programmes.

States that batteries manufactured after 31 December 2011 shall be marked with the watt-hour rating on the outside case.

States that vehicles powered only by lithium metal or ion batteries shall be classified as UN 3171 — battery-powered vehicle.

Covers the requirements for damaged and defective lithium batteries.

Covers the requirements for waste and recycling of lithium batteries.

SODIUM-ION BATTERIES and SODIUM-ION CELLS USING AN ORGANIC ELECTROLYTE CONTAINED IN EQUIPMENT or PACKED WITH EQUIPMENT have been assigned to Class 9 and tunnel code E.

Marking with the UN number is not required (since none is assigned), and for labelling the 9A label is required. When transporting using special provision 188 the lithium battery mark is also required (again without the UN number).

The following sentence shall be mentioned in the transport document

There are changes to the transport of dangerous goods for sodium ion batteries. They are only applicable in countries that have signed to multilateral agreement.

This article is a summary of the changes. The regulations must be referred to in full before any shipment is made. Please contact your company’s DGSA if you require further advice.