UK cities have demonstrated that they can inspire others and exemplify the transition to a zero-carbon future. Caroline Hand looks at three cities leading the way. 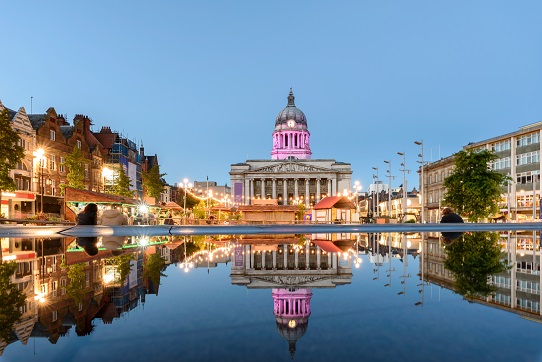 Worldwide, cities account for 75% of carbon emissions. A recent Report from Coalition for Urban Transitions estimates that if cities invest in low-carbon technology for buildings, transport and waste management, they could reduce their carbon emissions by 90%. What’s more, according to the report, the measures to reduce emissions could also address urgent political priorities such as air pollution, chronic traffic congestion, poor services and lost productivity — thus generating a significant economic return.

Acting in isolation, cities will not be able to deliver the necessary changes; they need to work in partnership with business and national government. However, cities in the UK have demonstrated that they are ideally placed to inspire others and exemplify the transition to a zero-carbon future. This article looks at how Nottingham, Bristol and Oxford are leading the way.

Nottingham plans to become a carbon-neutral city by 2028 — the earliest date for any UK city. The City Council set the target more than a year ago, having declared a climate emergency in 2018.

Nottingham already had a good track record in pursuing energy efficiency. It reduced emissions by 41% between 2005 and 2019 and is on track to exceed its target of procuring 20% of its energy generation from low-carbon sources.

The council is seeking to achieve the 2028 target for its own operations, thus setting an example for the wider community. Tackling emissions from waste management is one way in which the council can reduce its carbon footprint. For example, it has installed an innovative energy management system at its Eastcroft waste transfer facility. This comprises solar panels, a large battery to store the solar energy and a fleet of electric vehicles (EVs).

In Nottingham, as in most cities, the two sectors responsible for the majority of carbon emissions are transport and the built environment.

Transport emissions in Nottingham have remained constant despite a growing population. The reasons for this include:

The greatest challenge for Nottingham is reducing emissions from the existing building stock, much of which was built before 1980. Almost 60% of homes in the city, and 70% of the commercial buildings, fall below the EPC (Energy Performance Certificate) rating of C, which is the minimum target for homes to reach by 2030.

Top priority for the council’s energy services department is the roll-out of district heating. The network, one of the largest in the country, already heats 5000 homes and around 150 commercial properties. A resourceful new pilot scheme will soon see 30 homes heated with water from redundant mine workings. Disused mine workings below the city are thought to contain water at a temperature of around 26°C. This can be pumped to the surface, and then used to heat clean water using heat exchange technology. If successful, the scheme could be rolled out to heat many more properties.

With so many older, less energy-efficient properties, retrofitting of the housing stock is a priority for the council. Nottingham City Council believes it has a “commercial imperative” to find ways to retrofit existing houses to a near-zero emission standard. Four hundred council properties have already been retrofitted with energy efficiency technologies, and 4500 homes have benefitted from subsidised solar panels. Both of these schemes will be scaled up.

The city is also pioneering Energiesprong, a new approach to retrofitting existing properties. First developed in the Netherlands, Energiesprong delivers net zero energy performance without residents moving out, at an affordable cost — and it takes less than a week. Highly-insulated timber frame cladding is lifted into place by a crane and attached to existing walls. The solar roof is then attached on top of the existing roof. Windows and doors are removed and replaced, while heat pump, solar thermal or electric panel heaters replace older systems.

Twenty homes in Nottingham have already had this treatment, with another 260 to follow.

Bristol City Council has committed to achieving carbon neutrality by 2030. Bristol was the first council in the country to declare a climate emergency and already has the lowest carbon footprint of any UK city. Seeking to set an example to the wider community, the council has pledged to become carbon-neutral by 2025 for its own operations.

It has been particularly successful with the roll-out of renewable energy and in 2018 sourced enough energy from solar, wind and biomass to power 24,000 homes for a month. Bristol plans to expand its district heating network, which already benefits more than 1000 homes.

Partnership is at the heart of the council’s endeavours: together with Bristol Energy it has set up City Leap, a project bringing together various organisations to work together in delivering the net-zero energy system. As in Nottingham, the local universities have been quick to embrace the challenge and join the partnership. From all those organisations who have expressed interest, the council will eventually choose a shortlist of 10 to help deliver the necessary investment.

Local authorities in the area are working together to accelerate the transition to EVs. Four charging hubs are planned, the first of which (Eastville Park) provides eight connections which can charge an EV up to 80% in less than 30 minutes. Bristol Energy will supply 100% renewable electricity for most of these charge points.

Most ambitiously, Oxford City Council has pledged to achieve net-zero carbon emissions for its own operations by the end of 2020. This will be achieved through a combination of switching to renewables and offsetting — the offsets going to plant trees in the south-east of England. For the city as a whole, 2030 is the target year for achieving carbon neutrality. As with the other cities, the target will be achieved by reducing emissions from transport and buildings.

Oxford will soon host an Energy Superhub comprising the world’s first transmission-connected 50MW lithium ion and redox-flow hybrid battery systems as well as a network of 320 ground-source heat pumps. The energy from the facility will be used to heat and power around 300 social homes, reducing their annual energy demand by an estimated 25%.

Oxford’s efforts are being spearheaded by its Citizens’ (climate change) Assembly. Reaching out to the business community, the council will soon hold a Zero Carbon Oxford summit to which the major emitters will be invited.

While these three cities have attracted attention through their bold and innovative schemes, they are by no means the only UK cities to have ambitious zero-carbon strategies. Glasgow, Newcastle, Leeds and Edinburgh have all set themselves a target to become carbon-neutral by 2030. Glasgow has pledged to become a “circular city” — a policy that extends beyond energy efficiency to waste and resource management.

And similar initiatives are springing up across the world, from Oslo to Melbourne and Vancouver to Yokohama, pointing to a clean, prosperous and hopeful future for the world’s great cities.