Negotiations on a full UK-US trade deal are paused, but the UK Government is instead seeking to promote trade with the USA through dialogues on the future of Atlantic trade and by pursuing a state-by-state approach. 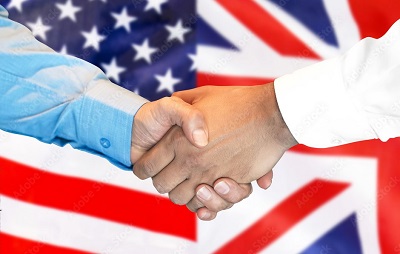 Joint US/UK dialogues on the future of Atlantic trade

President Biden and Boris Johnson met in September 2021 and welcomed the important developments in the UK-US relationship since they had last met the previous June, particularly in the areas covered by the new “Atlantic Charter” agreed then, including trade. They agreed to continue working towards a future full Free Trade Agreement but, in the meantime, the first dialogue between the UK International Trade Secretary Anne-Marie Trevelyan and the US Trade Representative Ambassador Katherine Tai took place in Baltimore, Maryland in March with a second dialogue taking place in Aberdeen in late April. Both parties agreed to work further on:

The first State-level trade and economic development Memorandum of Understanding (MoU) was signed with Indiana at the end of May. The UK is the seventh largest export market for Indiana, and Indiana buys $1.4 billion worth of goods from the UK. The Government believes that Indiana can offer UK firms significant opportunities in areas such as renewable energy, advanced manufacturing and pharmaceuticals.

The objectives of the MoU, which is not legally binding, are to:

The priority sectors for co-operation are advanced manufacturing and materials, aerospace and aviation, life sciences, agriculture and agbioscience, automotive, including electric, connected and automated mobility, low-emissions technology and solutions and energy and infrastructure.

Minister of State Penny Mordaunt said that this is just the first of many agreements with individual US States to be signed to bolster the UK’s £200 billion trading relationship with the US. She confirmed that discussions are underway with around 20 US States, with the first eight in the pipeline equivalent to 20% of the US economy. She hopes for an agreement with Texas by October this year. If Texas were a country in its own right, it would be the seventh largest economy in the world.

Following the resolution of the Section 232 tariff dispute, UK steel and aluminium exporters can start from 1 June to export tariff free up to a specified volume to the US, the UK’s largest trading partner, for the first time since 2018. In tandem, the UK will end its rebalancing measures on a wide variety of US products including whiskey, Levi’s jeans and Harley Davidson motorcyles. Lifting these tariffs means these US products will be cheaper to import, lowering costs for UK consumers and businesses.

UK Steel Director General, Gareth Stace, welcomed the news saying that being able to sell steel to American consumers tariff free would give UK steel producers a critical advantage over global competitors and would allow them to recover the market share lost in the years since tariffs were imposed. He said it marks the start of a comeback for UK steel in the US.