Tim and Caroline Hand count down the most harmful forms of waste and the strategies to neutralise them. 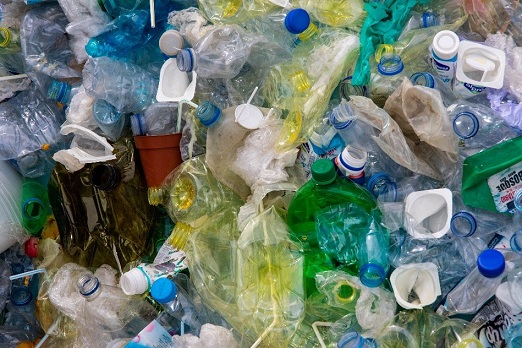 In dark corners across the planet, deadly villains are at work. If left to their own devices, they could transform the Earth into a desolate, polluted wasteland. Yet, these threats started life as valuable resources, which were wasted or poorly disposed of once they were no longer wanted. Thanks to the growing public awareness of environmental issues, there has never been a better time to launch an all-out attack on wasteful practices, and prevent further harm being done to our ecosystems. The time has come to explore 10 harmful forms of waste that make Thanos and the Joker look like trivial nuisances, and the strategies that can neutralise them.

They were once a nuisance to recyclers due to their low value and the lack of recycling infrastructure, but now pots, tubs and trays are now being collected for recycling by 79% of councils. However, they still evade capture and find their way to landfill due to confusion on the part of householders. Hopefully, the Government’s proposals for nationally consistent recycling collections will ensure that more of them end up in gainful employment.

While this small-time villain may not be difficult to deal with, it has recently adopted a new identity as hazardous waste. Beware — any wood which has not been properly classified will have to go through the hazardous waste consignment procedure and go to a specialist facility.

They may be soft and absorbent, but just like our previous villain, they are hazardous at heart. Rags contaminated with oils, diesel, etc are hazardous waste and you will need to make sure that your contractor is aware of them and offers a hazardous waste disposal service.

The power of public opinion is already putting this enemy in its place. Thanks to popular campaigns, compostable and recyclable coffee cups are taking the place of the wasteful plastic-lined versions. Crisp packets, once seen as impossible to recycle due to their aluminium lining, are now collected and recycled by Walkers. Similarly, Colgate has found a way of recycling toothpaste tubes and toothbrushes. Both these companies have partnered with Terracycle which specialises in collecting commonplace but difficult-to-recycle wastes.

Notoriously hard to kill, the sight of this alien invader is enough to terrorise any landowner. And it could be the landowner who feels the strong arm of the law, if they allow the weed to trespass onto neighbouring property. Follow the Environment Agency’s Guidance to stay on the winning side.

Warning — do not recycle! The ink used to print till and bank receipts contains BPA (bisphenol A) which can harm a child’s developing brain. This chemical has been banned from toys but is still found in receipts and food can linings. Chemical campaigners are concerned that BPA is finding its way back into our homes in recycled food packaging. There is a simple way of defeating this insidious menace — substitute harmless chemicals for BPA — and manufacturers are already on the case. See Hazardous chemicals in the circular economy.

Every year, UK parents throw away three billion nappies. At best they end up in landfill or energy-from-waste facilities, and at their villainous worst they contaminate recycling collections, robbing the economy of valuable resources.

We do have the technology to recycle nappies, but this waste villain has a formidable weapon — its noxious odour. The UK’s only recycling plant closed in 2013 and subsequent planning applications were refused on odour grounds. Procter and Gamble have invested in a process which turns nappies into bottle tops and viscose, and hope that this will be operational in 10 cities across the world by 2030.

At present, reuse is the best strategy to defeat the nappy menace. By switching to reusable nappies, even occasionally, families can reduce the size of the waste mountain. One MP has proposed an amendment to the Environment Bill which would direct local authorities to set up reusable nappy schemes for new parents.

Cling film’s harmful impact on the environment means that its benefits come with a heavy price. Given that it is very difficult to recycle, and usually contaminated with food, it generally finds its way to landfill or energy-from-waste. It picks up bacteria and metals in marine environments, which makes it harmful for the fish that consume it.

Fortunately, there are some promising innovations afoot with regards to this see-through villain, such as a recyclable bioplastic cling film developed by Italian firm Novamont, and edible films made with mango waste. Chemical recycling could also give cling film a more sustainable future by melting it down and using it to make new plastics. Until these innovations become more prevalent, however, it is best to avoid cling film where possible, and rely on alternatives such as wax paper and aluminium foil.

2. Old phones and other smart devices

One particularly crafty villain can do considerable harm by doing nothing! Old phones and gadgets gathering dust in homes represent a huge waste of valuable resources. According to a Royal Society of Chemistry survey, 45% of UK households have between two and five unused electronic devices. Given that some of the minerals contained within smartphones, such as indium and tantalum, could run out within a century, reclaiming these materials is of paramount importance. To make matters worse, when these devices are recycled, it often amounts to little more than smashing them up to obtain a few pence worth of gold.

There are schemes for returning and recycling unloved gadgets, but greater uptake is required. Fears over data security remain, despite the fact that there are ways to allay these anxieties, such as a factory reset. See Disposing of old phones and technology. In the long term, designing phones with greater longevity and encouraging consumers to repair and refurbish their old phones instead of buying new ones could prevent considerable waste. Progress is being made in this respect, with the modular phones designed by Dutch company Fairphone, which can be dismantled to replace faulty or worn components, representing a particularly promising development.

Lithium-ion (li-ion) batteries have the potential to become either a game-changing hero or a truly nightmarish villain. They are used in laptops and other appliances, and serve as power sources for electric vehicles (EVs). The number of these vehicles is set to increase dramatically in the years to come, as the UK Government has pledged to ban the sale of non-electric or hybrid vehicles by 2030. However, while EVs have many advantages over traditional cars in terms of eco-friendliness, the batteries within can present a problem once their purpose has been served. Smaller li-ion batteries have an unfortunate habit of exploding when improperly disposed of, which can result in landfill fires.

While the technology to recycle them does exist, the process is generally uneconomic, and could become more so as business seek to reduce the amount of valuable cobalt used in their construction.

However, numerous companies are working on innovations to make the process economically viable. For example, Green Li-ion (a startup based in Singapore) has developed a multi-cathode processor which it claims makes current recycling processes faster, while simultaneously lowering costs. Governments are also getting involved, with the US Department of Energy funding innovation by means of a competition. Given lithium’s value in the struggle against climate change, much rests on the success of those attempting to make large-scale lithium battery recycling feasible.