Gill Coult, an education consultant, highlights a worrying trend concerning the attempt to recruit appropriate teachers for certain positions from an ever-decreasing resource pool and once appointed, the increasing number of teachers who prematurely leave the profession.

Recruitment and retention of teachers is at crisis point. The Initial Teacher Training (ITT) Census revealed that the number of people applying for postgraduate teacher training for 2018/19 is down by 33% since last year. This in addition to the retention of teaching staff gives rise to concern about the future of our schools and colleges.

Based on the findings of a recent report by the Department for Education (DfE), the results of its 2017/18 census shows the current statistics regarding the recruitment of teaching staff and how this woefully compares to the DfE’s own estimate of how many new entrants were needed to ease the present situation.

The situation regarding recruitment is not the same across the different educational sectors.

In four out of the last five years, recruitment for primary teachers were either nearly met or exceeded. So despite the workload and other difficulties facing primary teachers, recruitment does not appear to be a problem. However, it is unclear how many agency staff have been engaged rather than qualified teachers looking for a permanent position.

The same cannot be said about secondary schools that have missed their targets by a long way. The Government has missed their recruitment targets for the last five years and in 2016/17 the number of graduates starting ITT actually fell.

Only 80% of the required numbers of secondary trainees were recruited. The total number of new secondary ITT entrants dropped by almost 500 from last year when in fact the DfE had estimated that an increase of 1000 trainees was necessary to fill positions.

Applications dropped from 54,125 in 2014 to 46,205 in 2017 despite an increased requirement due to the growth of pupils entering secondary education.

Although the target percentages in the table below range significantly, in almost all secondary subjects, the targets were not achieved. Only history and PE recruited in excess of their targets. Some subjects ranging from physics at 68% to design and technology at 33% missed their target by over 30%. 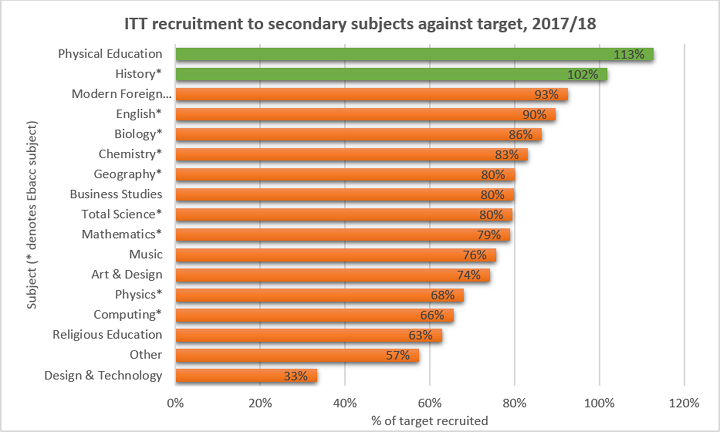 There are many factors that contribute to these statistics. They include supply and demand, confusion over routes into teaching, accountability and workload once in a teaching position.

With the number of secondary pupils expected to rise to 3.04 million by 2020, this is having a significant impact on the profession and the education of our young people.

Within the Further Education (FE) sector, similar issues are emerging. While FE in general has seen shrinkage due to funding and in some cases the unsatisfactory outcomes of some courses, many experienced lecturers and leaders have been lost as a result of cost cutting, which has left substantial gaps and caused the sector many problems. The FE sector traditionally employed staff with technical skills but more recently, with the introduction of compulsory maths and English at GCSE level, many staff are unable to deliver these subjects so it too has suffered from a skills shortage.

Teaching is no longer seen as a worthwhile profession for committed people and is not promoted as a viable, enjoyable career. There is no other profession in which every single person is legally bound to partake and this seems to have been forgotten along the way.

Teachers are leaving the classroom in record numbers. 11% of secondary teachers left the English state sector in the year to Nov 2016. Only 48% of secondary classroom teachers in England have more than 10 years experience. This has prompted further concerns about the pressures on the profession. Of those who qualified in 2011 alone, 31% had quit within five years of becoming teachers.

Dissatisfied teachers are moving overseas due to the situation in British schools. Nearly half of teachers working in British international schools say that their choice to move was influenced by their dissatisfaction with their teaching; lack of career opportunities and the salary in schools in England.

Teachers leaving the profession in search of other employment site unmanageable workload, changes to school systems, implementation of new initiatives, accountability and changes to school curriculum, as some of the reasons for being disillusioned with the teaching profession that ultimately urged them to leave.

Analysis by the Education Policy Institute indicated that teachers in England are working longer hours on average than in most other countries. It revealed that many full-time teachers were working 48 hours a week on average including evenings and weekends.

The relentless pressure on staff can often result in those with the most experience leaving the profession and inexperienced staff trying to hold the fort. Unfortunately, this also frequently involves the engagement of supply staff from agencies to fill gaps and despite their best intentions, often do not have the same commitment to the school or college as a full time member of the team.

Teaching unions suggest that by making teacher training more affordable, and introducing measures to encourage teachers to stay in post within areas that have significant recruitment problems may in part help the situation.

The Government introduced generous bursary systems including £30,000 to encourage physics graduates with a first class degree to enter the teaching profession. Despite these incentives physics remains one of the worst subject areas regarding meeting its target recruitment.

If staff are not retained, there is little continuity which makes it very difficult for cohesion and long-term planning. The adverse effects can be seen in the curriculum narrowing and the good will of the conscientious staff being stretched. This often leads to a loss of creativity and innovation and reduction in extra curricula activities.

Improving retention is not only cost-effective but if more teachers remained in the profession for longer periods, it would strengthen the potential pool for leadership positions.