Rebecca Fisk advises on encouraging children in focusing attention, both visual and auditory, so as to develop early communication and language skills. This can be used in your communications to support parents managing children at home. 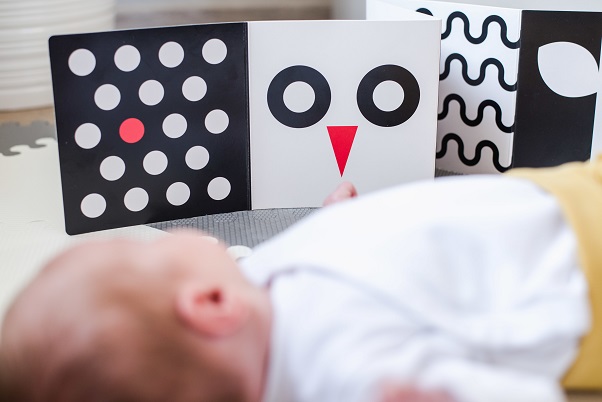 Communication is key to all our interactions and being able to focus attention is a fundamental skill which underpins this. Paying attention to something is about being able to notice it or be aware of it, whether that is a sound, smell, taste, or something that we touch or see. We use our senses to explore and attend to the world around us.

Developing language skills involves learning to listen (pay auditory attention) and to watch/observe (pay visual attention). For example, when a baby hears their mother’s voice, they may turn their head in that direction to locate their mother visually, followed by communicating with their mother through a smile, sound or outstretched arm.

Practical ideas for in the home

Being able to use the hearing sense to develop auditory discrimination, attention and memory is key to learning.

Discriminating different sounds means being able to tell the difference between one type of sound and another, so playing sound games such as animal noises or loud/quiet sound games can help young children to tell sounds apart from each other, long before they start to be taught the phonetic sounds for letters of the alphabet. Auditory attention involves focusing on that sense of sound over and above information coming to us through our other senses.

This skill can be developed by playing different types of world music for children to listen to. You could play games where you hide the object (remove visual cue) and then make a sound with it. It can be fun for the child, on hearing a specific sound, to respond in a particular way. For example, this can be played by having two objects hidden from view such as a set of keys to shake and a crisp packet to rustle. On hearing the shake children can shake their bodies, on hearing the rustle they can scrunch their hands, for example. As they get better at this, the number of objects can be expanded.

Stopping the movement when the sound stops helps to focus the attention on the sound specifically. Auditory memory is where what is heard and has been attended to, can then be stored and retrieved in the brain.

For example, if, when reading a story to a child about a snake, the hissing sound “sssss” is associated with the picture of the snake, you may find that young children hiss when they see a picture of a snake, retrieving the sound from their auditory memory and applying that to the picture (visual) cue.

Often all three of the skills — auditory discrimination, attention and memory — develop together as children listen to a wide repertoire of things, respond when they hear them, and have them repeated to embed in their memory.

Often our cues from the world come from auditory and visual stimuli at the same time, such as hearing and seeing an aeroplane in the sky. However, separating these skills is key to building each type of sensory channel for learning and communication.

In order to support the development of visual skills for young children there are easy ways to use colour, shape and pattern, for example.

Children can learn to name colours and tones of the same colour, such as light blue and dark blue, and to start being able to tell them apart. Be mindful that they will need lots of practice to recognise and name colours in a wide variety of contexts, such as on the clothes, objects in the home environment, natural colours outside, or craft items like felt tip pens, paints and wool. (Some children are colour-blind which manifests in boys mainly and this assessment is usually carried out in the first year of schooling as part of the eye check offered to Reception aged children.)

Once children know their colour names and can match them to a colour, activities such as a simple colour by numbers or stop (red) and go (green) games can be invented. Try taking a homemade stop/go sign on your daily exercise to see if the children can pay visual attention to it for a few minutes each time. Art activities using different shapes to sort and match can support visual discrimination such as mirror-image art where one person builds a simple pattern in a line and the other tries to copy it in a symmetrical way. In the same way, copying a photo of a 3D lego model to build a replica can support both visual discrimination and also memory.

Patterns are also useful when developing visual attention skills. Very young babies pay attention to black and white patterns on mobiles as they notice the contrast. Why not make some mobiles of your own to hang in the window which feature zig-zags and spirals made of contrasting colours? Shiny objects draw visual attention too, such as tinsel and tin foil.

You can have fun with stickers on fingernails or home-made finger puppets to ask a child to keep looking and following with their eye-gaze the finger as you draw lines vertically and horizontally in the air with the puppet. These early visual attention and discrimination skills can be further developed through jigsaw puzzles (you can make these from cutting up pictures from magazines), spotting features on the pages in a book or playing “snap” and “pairs” with cards.

There are lots of early skills parents can support children to develop at home through inexpensive everyday activities which build a child’s ability to pay attention for short periods to what they hear and what they see.

It is important to ensure activities are age appropriate and repeated over time so that children learn to build their confidence and independence in taking part and having a go.

Being able to attend well to auditory and visual stimuli supports early language, literacy and mathematical skills as well as those needed every day when communicating with others.