One of the world’s largest resources for limiting climate change lies under not only our rural but also our urban feet. Unless we treat the ground we stand on with more respect, trillions of vital allies could be lost, says Jon Herbert. 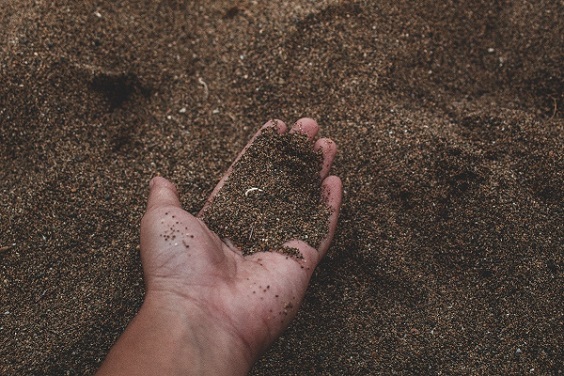 Microscopic empires, cities, coalitions, invasions, farms, chemical and waste recycling plants, plus perhaps up to 25% of the planet’s species can all exist within a single teaspoonful of soil.

That teaspoon, it is calculated, could hold a billion bacteria and hundreds of metres of fungi filaments. They live, breed, work, pass on their strengths, and die in the dark voids of the Earth’s incredibly thin “skin” where 5mm of soil can take a century to form and seconds to destroy.

This “tiny” world is now at risk. To save ecosystems we rely on that have evolved over millennia, protective measures are needed quickly.

A primer into the threatened but valuable world beneath our feet can be seen in our topic on Soil.

Soils are home to teeming populations of hidden life that support our surface world above. Their diversity has been likened to “a poor man’s tropical rainforests”. Crucially, the delicate environments they construct can also store water and carbon dioxide for centuries if left undisturbed.

To keep global warming temperature rises down to no more than 1.5C, more carbon storage capacity is needed. Soils are little-understood but vital candidates that can hold twice the CO2 volume held by the atmosphere — although as they warm, this falls.

The health of the residents is important. Some 80% of animals on Earth are tiny soil worms called nematodes. But ground-dwellers come in many shapes and sizes.

Worms, which breakdown organic matter as they feed and tunnel, are top of the heap. Macrofauna includes many familiar creatures: moles, mice, rabbits, centipedes, woodlice, snails and slugs.

This abundance of life — and the complicated communities and the intricate ecosystems they build — helps to maintain the chemical and nutrient balances needed for productive agriculture.

Safeguarding these matrixes is important. They can help to control increasingly erratic and frequent flooding events, droughts, and ground water flows. But our current record is not good.

What we know and do not know about soils

It is also clear that biodiversity underground and biodiversity above ground have different needs. Depending on how we treat them, soils can be carbon sinks or sources.

However, while space probes search for life on Mars, our understanding of the world beneath our feet is limited, with many species unidentified and unnamed.

In the two centuries since the Industrial Revolution, some 135 gigatons of farmland soils have been lost globally, according to 2019 “World Food Prize” winner, Professor Rattan Lal.

In the same period, circa 77 billion tonnes of CO2 have escaped from UK soils. It is also estimated that between 1978 and 2008, UK soils released 10% of the carbon they stored.

But soil problems go well beyond simple loss of land to other complicated damage.

Widespread soil degradation has several causes. Rain and wind-driven erosion is a major factor that occurs naturally over time. However, humans can make erosion worse, quickly.

Modern intensive farming methods break up delicate soil structures and add unnatural nutrients on an industrial scale that can lead to “eutrophication” algae and plant pollution in vulnerable wetlands.

Topsoil is where 95% of Earth’s food grows. But tilling — ploughing at depth — allows in oxygen that microbes convert to CO₂. The powerful greenhouse gas methane is another problem.

With no-till farming, seeds are sown into holes drilled into the earth. This could reduce agriculture’s climate impact by circa 30%, with more carbon stored as decomposed plants underground.

Harvesting calories from plants rather than cheap meat is an alternative with strong ethical dimensions; more than 80% of the world’s farmland currently supports livestock that supply just 18% of the calories humans consume. Other soil solutions include crop rotation and rewilding.

Run for the trees

However, livestock, crops and trees can work better together. Researchers are now studying whether “silvopasture” that links shade-tree planting with better plant growing conditions and support for biodiversity can also improve carbon storage, flood control and drought-resilience (https://www.innovativefarmers.org/news/2021/february/18/twelve-year-field-lab-into-the-benefits-of-silvopasture-launched/).

Modern farming needs safe predictable weather conditions. The revised aim is to plant trees surrounded and protected by foraging plants for livestock. Once established, trees can then provide shelter and more stable conditions for soils, animals, plants, crops and wildlife.

But as 68% of humans become city dwellers, compaction and construction are sealing off increasing areas of urban soil. Other threats include salt pollution from evaporation, acidification, desertification, deforestation and landslides in increasingly wet weather conditions.

Good soil quality can be important in sustainable drainage systems (SUDS), an alternative to channelling heavy flood waters away from urban areas via overloaded rivers and estuaries to the sea.

SUDS replicates natural mechanisms by creating shallow swales, reed beds, filter trenches and retention basins that clean and store storm water as it seeps into the ground or wider environment.

As underground organisms vanish, damage soils underperform and food production cannot be guaranteed. This has been the focus of a number of recent initiatives.

In late-April 2021, the first UN Global Symposium on Soil Biodiversity (GSOBI21) looked at soils “hanging in the balance”, with a 1938 quotation from Charles E. Kellogg that “essentially, all life depends on the soil. There can be no life without soil and no soil without life; they have evolved together.”

This built on the UN’s bleak 2017 The Global Land Outlook (GLO) study which noted that a third of Earth’s land is severely degraded with 24 billion tonnes of fertile soil lost annually to intensive farming.

The UN also estimates that land degradation is damaging the wellbeing of 40% of people, with increasing migration and conflict risks.

Another reference point is State of knowledge of soil biodiversity – Status, challenges and potentialities. Summary for policy makers. This considers the importance of biodiversity for food security and nutrition.

Less optimistically, research also suggests the carbon storage potential of soils may less than first thought. Soils and plants take up about a third of current carbon emissions. Higher CO2 levels can boost plant growth. Carbon storage in soils was expected to rise too. That doesn’t seem to happen.

This is important. Soils hold three-times more organic carbon than living plants. The explanation is that while dead plant biomass falls to the ground, extra growth requires extra nutrients.

Taking these nutrients from soils increases symbiotic microbial activity in roots. Which in turn releases carbon dioxide that would otherwise stay locked in the ground.

Understanding this balance is essential. It might be further affected by droughts, heatwaves and fires. The result could be negative effects on natural ecosystems and the speed of global warming.

The overall lesson is perhaps that treating soils like dirt is unwise.