The Workplace (Health, Safety and Welfare) Regulations 1992 set out the requirements for floors and traffic routes and have given rise to a mass of case law. Barrister Robert Spicer reports. 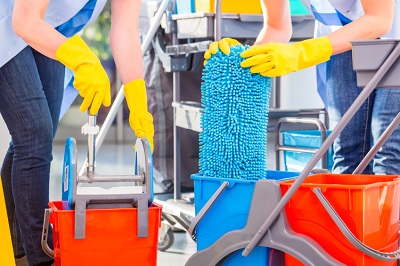 Regulation 12 of the Workplace (Health, Safety and Welfare) Regulations 1992 states, in summary, that workplace floors and traffic routes must be suitably constructed for their intended uses, and so far as is reasonably practicable kept free from obstructions, articles or substances likely to cause slips, trips or falls. Floors must be provided with adequate drainage where necessary. In particular, floors and the surfaces of traffic routes must not have any holes or unnecessary slopes, be uneven or slippery.

One of the most recent examples of prosecutions under this regulation is the Scottish case of McLeish v Lothian NHS Board (2017).

M, a nurse, slipped on a wet floor in a hospital. She had not known that it was wet — there was no warning — and she would not have entered the wet area if she had seen a wet floor sign at its entrance. There was no wet floor sign. A cleaner who had mopped the floor stated that she had placed a trolley at the entrance to the room to indicate that the floor was wet; however, the way in which she had mopped the floor meant that it was not obviously wet.

M suffered a fractured arm, dental damage and complex regional pain syndrome. She also suffered a depressive episode which was controlled with medication. M claimed compensation from her employer on the basis of a breach of regulation 12 of the Workplace (Health, Safety and Welfare) Regulations 1992.

The claim succeeded and compensation of £40,000 was awarded. This was a less severe injury resulting in some permanent disability. M had been given no warning that the floor was wet. A wet floor sign was a reasonably practicable measure.

In Ellis v Bristol City Council (2007), Ms E was employed as a care assistant at a home for the elderly for which B was responsible. She slipped on a pool of urine left by a resident of the home in the main corridor. B knew that residents regularly urinated in the main corridor and that this made the vinyl surface slippery; in fact, the presence of urine on the floor had resulted in a number of accidents. B had an adequate system of inspection and cleaning in place, risk assessments and two non-slip mats placed in the worst affected areas.

Ms E claimed compensation for a breach of regulation 12. She alleged that the floor was not suitable for the purpose for which it was used because it was frequently urinated on and was slippery when wet. The Code of Practice related to regulation 12 states that the surface of floors which are likely to get wet should be of a type which does not become unduly slippery and a slip-resistant coating should be applied where necessary.

At first instance the claim was dismissed on the basis that strict liability in relation to regulation 12 related to the construction of the floor surface and not to a transient hazard. Ms E appealed to the Court of Appeal. That court allowed the appeal and made the following points.

The application of regulation 12

The question of whether regulation 12 applies to persons other than workers has been considered by the courts in a number of cases. For example, in the Scottish case of McCondichie v Mains Medical Centre (2004), Mc was a patient of the M medical practice. She slipped on ice in M’s car park and claimed compensation for breach of statutory duty under regulation 12 for failing to ensure that the surface of any traffic route within the workplace was kept free from any substance which might cause a person to slip. On behalf of M it was argued that the 1992 Regulations applied only to employees.

The court decided the following.

A different conclusion was reached in the case of O’Brien v Duke of Argyll’s TrusteesLtd (1999). O was travelling with a coach party when she visited T’s hotel. She fell on the dining room floor and struck her head on a chair. She claimed that the accident had been caused by a slope in the floor and a ripple in a carpet and claimed compensation for a breach of the 1992 Regulations.

It was argued on behalf of T that O’s claim must fail because the reference to a “person” in regulation 12 was designed only to protect employees. The Scottish court found in favour of O. It ruled that the place where the accident had happened was a workplace. If Parliament had intended non-employees to be excluded it could easily have imposed such a restriction. Since it had not done so, O’s claim could proceed.