“Do not drive or operate heavy machinery” — we’ve all seen these warnings on the package inserts provided with prescription or over-the-counter medications, but what are the implications for risks in the workplace? Vicky Powell examines the latest research on this subject, at a time when an ageing workforce means that ever more employees will be on prescribed medication for common health problems during working hours. 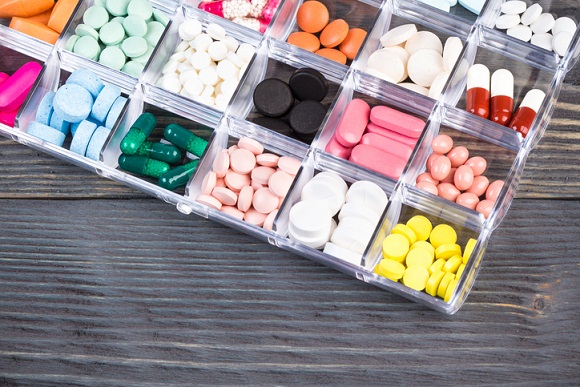 When the drugs are legal … and prescribed

Advice on drugs in the workplace traditionally tends to focus on illicit substances, such as cocaine, cannabis and ecstasy, and the guidance for employers in this regard is usually comprehensive and available from a range of sources.

In contrast, information about the work-related risks associated with prescribed or over-the-counter medication tends to be thinner on the ground.

The Institution of Occupational Safety and Health (IOSH) has pointed out that the populations of Western countries are ageing, resulting in an increasing prevalence of common age-related health conditions among employees, and a higher proportion of the workforce taking prescribed medicines.

Because of this the risk of accidental injury at work might increase.

Certain widely-used medicines have unwanted side effects such as drowsiness, and some common illnesses like mental health disorders, diabetes and epilepsy may result in sudden incapacity or impaired judgment.

Employers are responsible for managing such risks, but this can be challenging. While employers must safeguard their employees and those affected by their work, they must also avoid imposing needless restrictions on work opportunities, especially those that affect older employees. Careful risk assessment, informed by a proper evidence base, is therefore increasingly important.

To date, however, surprisingly little has been known about the impact of common health problems on the risk of injury in the workplace.

Many years ago, a study was conducted on the effects of medication, specifically prescribed for anxiety and depression, on working life (see Research Report 57, published by the Health and Safety Executive (HSE)).

The findings, released in 2003, were interesting, if somewhat disquieting: both the symptoms of anxiety and depression and the associated medications were reported to impair work performance, among a focus group of people recounting their own experiences.

Participants described a variety of accidents and near misses that they attributed to their condition or to the side effects of medication. For example, one primary school teacher described retrieving a football by jumping down from a dangerously high ledge and injuring himself, while a university administrator related suffering a series of falls. In another case, a GP reported finding driving extremely hard when he was depressed because his concentration levels declined.

Workers with responsibilities for others, such as teachers, healthcare workers and managers, appeared to present a particular risk to safety in the workplace.

In addition, non-compliance with medication was common due to unpleasant side effects, lack of improvement in symptoms or because the medication initially made them feel worse.

Employees were found to be largely ill prepared for their medication regimens and would have welcomed more information from doctors.

It has been noted that evidence that quantifies risks has been limited and of variable quality. In response to concerns about the impacts of health conditions and prescribed medications at work, and the lack of current available information on the subject, researchers from the University of Southampton, supported by funding from the IOSH and the Medical Research Council, recently carried out important work in this regard, published in 2017.

The Role of Health Problems and Drug Treatments in Accidental Injury at Work analysed a sample of 8000 anonymised medical records from the Clinical Practice Research Datalink (CPRD) (including some 1700 people who had consulted their doctor for a workplace injury and matched control subjects).

It revealed the following.

Commenting on the research, Professor Keith Palmer, Professor of Occupational Medicine at the University of Southampton, who led the study, said, “The populations of Western countries are ageing. The frequency of common age-related health conditions is therefore rising among the workforce, as is the proportion taking prescribed medicines.

“Potentially such factors could increase the risk of accidental injury at work. The onus is on employers to manage any associated risks to health and safety equitably and appropriately.

“Managers face the dilemma, on the one hand, of ensuring the physical safety of workers and third parties, and on the other hand of avoiding needless restrictions on work opportunity among older workers.”

In particular, as indicated by the well-known warnings on the package inserts of medication, any form of driving and the operation of heavy machinery operation may potentially present risks in the workplace.

The HSE advises that whether or not the activity will be safe depends on various factors, including the nature of the medication and the task to be performed.

In the case of machinery, the HSE says the residual level of risk from operating some very well guarded machines may be so low that there is minimal risk of injury to the operator or others. However, in other cases — particularly with the use of lifting and mobile work equipment — a more cautious approach will need to be taken.

Advice should be sought from a medically qualified person (normally the worker’s own GP), particularly if the medication gives warnings about the operation of machinery, or has significant side effects, which may affect alertness, concentration or response to danger.

In the case of workplace transport, including cars, vans, lorries and lift trucks for example, the HSE advises that workplace transport operators should ask their GP or pharmacist about the effects any medication may have on their ability to drive safely.

Staff will need to tell their employer if there is a risk of adverse effects which may compromise safety and they may need to stop operating workplace transport until the nature and extent of any side effects have been established.

In each of the medical conditions highlighted in the University of Southampton’s research, the researchers concluded that a significant minority of occupational injuries may be preventable by paying closer attention to the underlying health problem, including action to modify workplace practices.

While there was a moderate elevation of risk with some forms of physical and mental ill health and their associated medications, the researchers concluded that no case exists for blanket exclusion of such individuals on health grounds. None of the risks of injury was raised to a level that would automatically stop a worker from being employed on health grounds.

Rather, the research reinforced earlier IOSH-funded research findings into returning to work after cancer which recommended individualised risk assessment as the sensible and proportionate way to manage such risks.

The new research built on this, recommending in situations where there are heightened overall risks, greater weight to individualised risk assessment should be made for:

All of this means careful consideration of an individual’s suitability for employment will be required, particularly among workers with active troublesome health problems and for those with jobs where an accident might carry a significant risk of injury to the worker or others.

Commenting on the issue, Kate Field, Head of Information and Intelligence at IOSH, said, “As people work longer and the prevalence of chronic ill-health rises in the workforce, so the need for proportionate risk-based evidence grows and assumes a greater importance. Being in work is good for people and business, even if we are a little under the weather or are perhaps managing a serious or chronic condition.”

It is estimated that almost seven million people of working age in England and Wales are living with a health condition or disability. Now, for the first time, research has provided robust quantitative evidence on the risks of workplace injury in employees with common health problems. And, encouragingly, effective rehabilitation, along with individualised risk assessments and suitable return-to-work plans can provide a route map to help employers manage the risks and retain key workers safely.