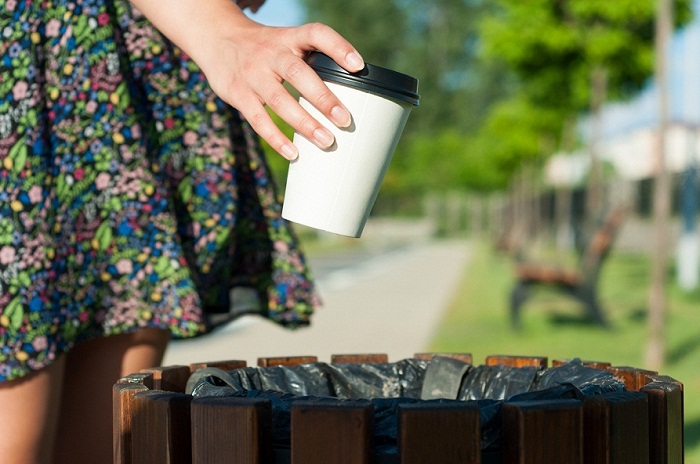 China, Thailand, Indonesia and the Philippines recently promised to help reduce the estimated 5–13 million tonnes of multi-sized plastic pieces that flow out annually to the high seas — 75% of land-borne micro-pollution is taken to the oceans by just 10 mainly Asian rivers.

The Pitcairn Group, as the only remaining British Overseas Territory, probably qualifies as one of the UK’s most littered regions.

However, litter — an unpleasant public face of waste — is a much wider UK challenge. The British mainland is also awash in a sea of discarded disposable coffee cups, plastic water bottles and other unwanted urban and rural flotsam and jetsam.

Britons throw away 2.5 billion paper coffee cups every year – 5000 a minute, or seven million a day — thinking that they are recycled. In practice, because of their waterproof inner lining, the vast majority are not. Similarly, many of the two million tonnes of plastic bottles Greenpeace estimates the world’s top six global soft drink brands sell to customers annually for single use end up in the sea.

Until recently, it seemed that little could be done practically to tackle the rising tide of cups and bottles. Now, pilot schemes are afoot that could turn this problem around.

According to the UK Recycling Association, Britain’s top offender when it comes to thwarting recycling attempts to minimise landfill streams is Pringles-type packaging. A combination of cardboard tube, metal bottom, foil cap and plastic top is almost impossible to separate and recycle commercially, says the association.

Number two on the list are Lucozade Sport-type bottles with an outer sleeve that confuses computer scanners and have to be removed manually from conveyors. They often also end up in landfill.

Cleaning spray bottles come in at number three; the body of the bottles is recyclable, as it says on the label. However, the pump itself comprises several polymers, including a metal spring.

Black plastic food trays hit the charts in fourth place; the black colouring makes them worthless for recycling. Leaving traces of covering film attached with blood-soaked wadding inside knocks them out of the recycling chain.

And so the tally of offenders goes on.

There are logical solutions. Britain’s milk suppliers have agreed that all bottles and caps should be made of the same recyclable plastics. This kind of success increases the pressure on designers to produce vessels and containers that can be used repeatedly.

Even more forward-looking suggestions include the idea that because online shoppers by definition have already made their purchasing decision, instead of branded packaging, the technology exists for mini-projectors within fridges to project branding images onto blank carton surfaces.

Hugh Fearnley-Whittingstall is an ardent anti-unrecyclable coffee cup campaigner. He points out that most paper coffee cups from the main high street coffee vendor chains are fused with a waterproof inner polyethylene lining that cannot be separated in standard recycling mills.

Yes, the label says recyclable. But special processes are needed that very few recycling facilities have. To compound the problem, cups are made with virgin rather than recycled paper in the first place. After a few minutes’ use, everything is thrown away, with a large carbon footprint. Some high street outlets stress that their cups are made with sustainable wood pulp. But by one calculation, only 1% is actually recycled.

The first response might be to use more recyclable materials. But the momentum behind a good alternative seems to be missing.

The second solution is the reusable cup route. One vendor does offer a small incentive to use cups that can be filled again and again. However, it doesn’t seem attractive enough to catch on yet. Which is a shame, because there is serious money to be made by anyone who can devise the perfect reusable coffee cup!

The City tries a solution

The City of London is trialling a solution, however, that could see some five million disposable coffee cups recycled in the current year.

By encouraging more than 100 retailers and 30 organisations to offer convenient recycling facilities within the Square Mile, the initiative hopes to pioneer a responsible answer.

The aim is to produce a plastic, or recovered fibre, material that can be turned into other products, some with a community use.

Yellow bins shaped like coffee cups can now be seen on City streets, as well as at Liverpool Street and Cannon Street stations. The City of London Corporation, Network Rail, coffee chains, plus the environmental charity, Hubbub, and recycling company, Simply Cups, are behind the scheme.

Another litter sin many of us are guilty of is buying and then discarding single-use plastic drink bottles.

Greenpeace believes that the top global drink producers vend plastic bottles collectively weighing two million tonnes a year, many of which make their way down to the seas.

Its recent study also concluded that the same six companies currently recycle a joint average of 6.5% of their bottles, with little ambition to reduce their use.

However, this situation is beginning to change. Following the success of levy charges on throw away plastic bags, bottles are now in the firing line.

People of more mature years may remember the war-cry of “well, we’ll have to start taking the pop bottles back then” whenever lavish spending plans were suggested. What goes around comes around.

Germany already imposes a refundable 25-cent charge on plastic bottles. In some US states, similar charges on aluminium — or aluminum as the metal is described on the west side of the Atlantic — cans are prompting children to scour the streets in search of empty tins on which to reclaim the deposit. Nudge?

The UK Government is looking at a new litter policy that includes refunds, but with the added complication that responsible citizens who already recycle cans and bottles in their domestic waste will miss out unless they make an extra effort to return them separately to special collection points. But public support does seem to be growing.

It was reported earlier this year that Coca-Cola is backing a deposit-return scheme for cans and bottles in Scotland. The company says that “the time is right to trial new interventions such as a well-designed deposit scheme for drink containers, starting in Scotland where conversations are under way”.

It adds that the company had made “significant progress” in recent years towards making packaging more sustainable and now works to find “ways to collaborate” with other parties to raise recycling and lower littering rates.

The Association for the Protection of Rural Scotland is leading the Have You Got the Bottle campaign and lobbying ministers to back the deposit-return scheme.

Keep Britain Tidy (KBT) recently made the point that there are already more than 300 different systems for waste collection. In England at least, confusion has been identified as a probable cause for low household recycling rates: 42%.

KBT wants the Government to create a standardised UK “recycling blueprint” to make the national recycling convention easier. The current target is for local authorities to recycle 50% of UK waste by 2020 to meet the EU’s Waste Framework Directive.

In Wales, however, local authorities already recycle an average of 60% because the principality has a uniform countrywide system whereby food waste is collected from every household every week. This helps to reduce the seven million tonnes of food waste Wales creates each year.

Instead, methane extracted from food waste is used to generate power that goes back into the national grid.

Of the UK’s constituent parts, Wales has also been very proactive in dealing with waste and litter. If Scotland can take a lead, so can Wales.

One of recycling target in Wales is young people. Recent Recycle for Wales research finds that only 43% of 18 to 24-year-olds, and 34% of 25 to 34-year-olds, put waste in the appropriate recycling bin. The matching figure for over 65-year-olds is 95%. Single people are the worst culprits; 18% admit that they rarely recycle, compared to 7% of couples.

The most common excuse is “too messy or smelly”; some 350,000 tonnes of Welsh food waste still ends up in landfill annually.

The Welsh Government is commissioning a study which, as in Scotland, could see a return value placed on bottles. MCS would also like to see takeaway containers made fully compostable.

Recycling rates for Welsh councils have also risen substantially in the last year, provisional data suggests. Local authorities reused, recycled and composted 62% of municipal waste, according to most recent annual figures up to September 2016.

Ceredigion was said to be the most successful, with a rate of 70%; Blaenau Gwent achieved 52% at the other end of the scale. The Welsh Government’s recycling target for council by 2014–2015 is 70%.

Figures also show a quarterly rise in recycling rates, with 60% of waste being processed between July and September 2016, an increase of 5% over the same period in 2015. Meanwhile, the amount of waste produced by Wales increased from 411,000 tonnes to 425,000 tonnes — a growing problem needing a commensurate solution.

However, Recycle for Wales came up with a novel publicity campaign earlier in the year to increase feed recycling rates, even though it is already sets a good example for the rest of the UK.

The idea highlighted how 240,000 tonnes of discarded banana skins could create positive energy. The point was made that a caddy full of food waste is enough to generate the energy needed to watch a football match on television.

Recycle for Wales says that the excuse most commonly given was that householders did not think they produced enough waste to matter. In practice, recycling unavoidable waste food items such as tea bags, egg shells, potato peelings and, of course, banana skins is important.

Another Welsh initiative is taking place on Anglesey where 20,000 waste trolley boxes have been given out to residents to raise recycling rates and help the authority avoid fines. The trolleys are intended to increase the combined collection of glass, tins, and plastics, and are said to boost recycling rates, even though some users elsewhere say they are difficult to carry up steps.

Recycling has environmental gains but can also produce attractive products. A scheme recycling 800 old and dumped mattresses a week in Northern Ireland is showing the way.

The resulting products are a polyester used to make socks and fleeces, foam used in the manufacture of carpet underlay, an acoustic dampener for cars and a soft landing material for show-jumping horses.

Fabric is incinerated as energy-from-waste. It is estimated that only 1% of Northern Ireland mattresses are recycled.

The scheme run on the Shankill Road in Belfast by Ulster Supported Employment and Learning will strip down more than 13,000 mattresses this year collected from council recycling centres and bed shops — diverting 400 tonnes of waste from landfill that wrecks processing machinery.

In the UK, some 215,000 used mattresses a year go to landfill, where they are difficult to compact and can cause fires by absorbing hazardous materials.

Even so, Defra data shows that waste recycling rose from 10.7 million to 11 million tonnes a year.

Part of the problem councils face is preventing people from putting the wrong items into the wrong bins. Most rejected rubbish was incinerated, or sent to landfill.

Another difficulty is that people are not sure what can be recycled and what not.

A more systematic problem is that small amounts of contamination can make the entire loads of waste unrecyclable. This is a people issue that unfortunately does not reflect the sterling environmental efforts being made by many other people.

As a Local Government Association spokesman has pointed out, “In the past decade, councils and residents have worked together to radically increase recycling and divert millions of tonnes of waste from landfill.”

Confusion would seem to reign. No one-size-fits-all solution is possible. More solutions are needed.