With one of the lowest levels of male participation of any workforce in the UK, the early years sector faces many challenges in addressing the gender imbalance in childcare provisions. Elizabeth Walker looks at the barriers to male recruitment and the latest guidance for early years providers on encouraging more men into childcare. 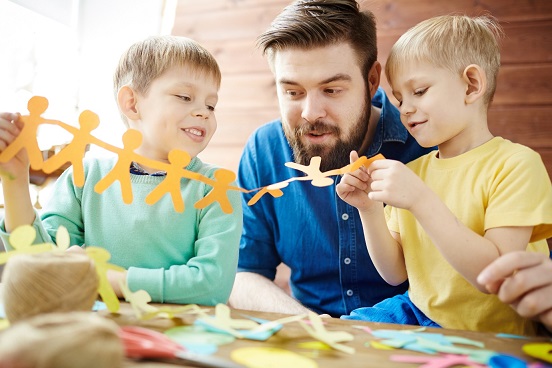 The latest research shows that just 3% of early years workers in England and Wales are men, rising only slightly to 4% in Scotland and this has hardly changed in the last 20 years according to Men in the Early Years (MITEY). Whereas better progress towards gender equality has been made in other traditionally female work sectors and in comparison 11% of men are nurses, 14% are social workers, 15% are primary teachers, 38% are secondary teachers, 46% are GPs and 55% are hospital doctors.

Earlier this year, the Organisation for Economic Cooperation and Development (OECD) identified the lack of gender diversity as a key factor in the shortage of early years education staff across the developed world. Its report recommended that countries should engage in stronger efforts to bring men into early education and childcare by improving the status of jobs in the sector and engaging in information and recruitment campaigns.

Benefits of men in the early years

Employing more men into childcare will help to address the current early years recruitment crisis in the UK as employers can double their talent pool and have a wider availability of the best staff. A more gender-balanced workforce will also provide children with the widest range of experiences, skills and teaching styles that will benefit their learning and development. Other benefits include:

There are currently many barriers to men’s low participation in the early years and childcare workforce including:

This wide range of barriers need to be addressed across the sector in order to improve the gender-balance of the workforce and this will need government support as well commitment from early years provisions.

Recently some initiatives to support targeted recruitment of men into childcare have launched in the UK. The Men in Early Years Challenge Fund in Scotland is designed to increase the number of men working in early learning and childcare (ELC), and the Department for Education (DfE) has provided the Fatherhood Institute with funding to support male recruitment into the profession.

In addition, the London Early Years Foundation (LEYF) has set out a four-point plan to address shortages of male workers in the early years and has called for the following action points.

MITEY has recently published a new Guide to Recruiting Men into Early Years Education, funded by the Department for Education, which calls on early years employers to take active measures to recruit men.

The 20-page guide is aimed at managers in the early years sector and draws on best practice internationally and from within the UK to propose some strategies that could help providers attract more male staff. It has been endorsed by the Early Years Alliance, National Day Nurseries Association, Early Education, the Gender Equality Collective, the Men and Boys Coalition and leading neuroscientist Professor Gina Rippon.

The MITEY guide offers practical ways for early years employers to attract more men into the workforce and provides the following suggestions.

The guidance also recommends that providers sign up to the MITEY Charter which can be displayed in the setting or on its website.

The five points that make up the MITEY Charter are as follows.

The Charter is a great way for providers to show parents, staff and new recruits that they value men’s potential to contribute positively to the care and education of young children, and are taking steps to bring them into the workforce.