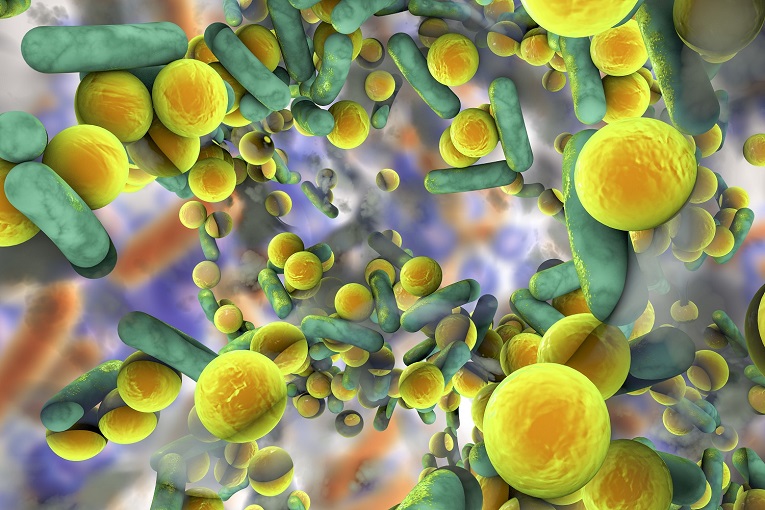 Imagine fish slime saving your life. Unappealing though the thought may be, fish slime could be a vital key to developing a whole series of new drugs and treatments needed urgently in the war against infection.

For a brief historic period, humans have enjoyed the upper hand against bacteria. But with eons of experience behind them, the bugs have begun anticipating and outsmarting even clever manmade drugs. The result of using antibiotics very freely is superbugs.

For the next round of the struggle, antibiotics are needed that bacteria simply haven’t had enough time to develop defences against yet. Otherwise, everyday infections could become as life-threatening as they were a century ago. Even simple 21st century dental surgery could lead to the possibility of painful death from untreatable abscesses.

To date, we have taken our armoury from the environment. Most current antibiotics were identified originally from microbes living in the soil where they are locked into a constant race to produce powerful chemical cocktails with which to kill competing bacteria.

As the potency of our known antibiotics is reduced — made worse by strong incentives for drug companies to produce and sell known products rather than new and financially risky experimental ones — the hunt is on to find a new generation of old, naturally occurring substances and compounds in very new places.

And we are looking for them in hidden environments like the deep oceans — making it even more important to preserve, and not bite, the natural hand that feeds our survival.

What nature has done for us

Nature has been generous so far. Salicylic acid taken from willow bark has been used to reduce fevers and inflammation since Greek times and in 1897 was used to develop aspirin. Perhaps the greatest discovery ever was penicillin in 1928, although Alexander Fleming never patented or tried to make a medicine from it, leaving that to later researchers who won the Nobel Prize.

The opium poppy has given us morphine and codeine, not to mention heroin. Meanwhile, a rugged little bush called ma huang used in Chinese medicine was once the main ingredient for decongestants like Sudafed due to ephedra, which is now a controlled substance.

Upper-hand to the bugs

New strategies in epidemiology are being tested, such as using computer and smartphone “big data” to anticipate and head off outbreaks of severe disease infection and keep pace with bacterial evolution.

However, statistically we seem to be on a loser. Sheer numbers suggest that the bugs should eventually win. By one calculation, there are some five million trillion trillion — that’s 30 zeros — bacteria living on the planet, many in a state of constant mutation.

Our problem is that more bacteria are becoming antibiotic-resistant due to the persistent “block-buster” use of conventional antibiotics as cure-alls, not only in human medicine but also agricultural sectors around the world. They are just too commercially convenient.

On the other side of the balance sheet, according to the World Health Organization (WHO), 51 antibodies were being trialled in people in 2018. Only 17 are considered innovative, the rest are related closely to existing drugs. Fewer than 10 are likely to make it through to market in five years.

And that is the heart of the problem. At least two million people are infected annually by antibiotic-resistant bacteria, of which 23,000 die. By 2050, the figure could rise to around 10 million annually.

As Health Secretary, Matt Hancock, puts it, “Antimicrobial resistance is as big a danger to humanity as climate change or warfare. That’s why we need an urgent global response”.

The NHS wants to shrink antibiotic use by 15% by 2024; the Government is also looking at new ways to break the old model and encourage drug companies to be venturous in a high-risk industry.

If successful, the fish slime research mentioned above could lead to new antibiotics from derivatives of natural compounds found in the mucus layer that coats the outer surface of young fish.

While this helps to protect the fish from harmful bacteria, fungi and viruses, it is microbes in its “microbiome” that could lead to a wide range of interesting substances with new antimicrobial powers. Novel antibiotics may be hiding inside antimicrobial peptides (AMPs). One research goal is finding which peptides — two or more amino acids linked together — in the genetic code can be directed towards attacking antibiotic-resistant bacteria.

While still in a very early stage with a lot more analytical work to do, as one researcher explains, it is “important to hunt for antibiotics in unusual places”. The goal in this complex field is to develop new antibiotics that are effective against WHO priority pathogens.

The other major challenge is how well we can safeguard environments that give us invaluable natural answers. Our new hunting grounds are the seas, so we need to protect the marine realm from pollution, increasing acidification, coral bleaching, the physical and biological impacts of plastics, plus species migration, for our own wellbeing as much as theirs.

Meanwhile, exotic biodiversity-rich, land-based environments are at risk too. A new report published by Global Forest Watch has found that forests in the world’s tropical regions were being lost in 2018 at the rate of 30 football fields per minute — 12 million hectares annually — and that was an improvement on decline rates in 2017 and 2016.

The greatest concern is continued destruction of primary forest equivalent to the size of Belgium with older untouched trees that can be hundreds or thousands of years old. As well as being home to an estimated 20 million people, the forests of the Amazon basin are important to the world for storing carbon dioxide and their biological potential.

The Amazon is not alone. The Democratic Republic of Congo is now the second-largest country by area to suffer similar loses; other countries including Colombia, Bolivia and Peru face a similar fate. Opposition is often difficult or fatal, with hundreds of people reported murdered for standing in the way of miners, loggers, ranchers and other commercial interests.

Chile, meanwhile, as the host nation at this year’s UN COP25 climate talks, wants to focus action on the oceans, which absorb up to 80% of human-generated carbon dioxide (CO2). It says the issue has been side-lined from the key political forum, the United Nations Framework Convention on Climate Change (UNFCCC). With its long coastline, Chile, controls almost 18 million km2 of the world’s oceans.

Another new report published by Science Advances in April 2019 says world governments must protect 30% of the earth’s territorial and marine environments by 2030, and manage another 20% sustainably, if we hope to both save vital ecosystems.

To slow the extinction of species, scientists want to see a doubling of the area with fully-protected habitats like tropical forests and grasslands, plus a five-fold expansion of marine protected areas.

The report’s recommendations are part of an expanded “global deal for nature” proposed in 2017 to show what is needed to meet the Paris climate accord signed in 2016. It coincides with a recent release from the UN Intergovernmental Science-Policy Platform on Biodiversity and Ecosystem Service (IPBES) a year ahead of a discussion between governments on how to meet conservation targets in the decade ahead under the Convention on Biological Diversity.

Many highly biodiverse areas are concentrated in small pockets in the tropics, but major ecosystems including coastal mangroves and cold tundra are also in urgent need of preservation if humanity wants to rely on them for fresh water sources, natural carbon storage and coastline protection.

Answers from the deep

Because marine microbes are so different and diverse, the ocean offers researchers unparalleled discovery opportunities. In April 2019, Ohio State University researchers reported another unexpected find. Extensive survey work has shown that the oceans contain almost 200,000 different viral populations between the North Pole and the South Pole from the surface to depths of 4000m.

The team created a global map of marine viruses using seawater samples from some 80 sites around the world and found not only that the number of viruses was almost 12 times higher than previously estimated but also that they fell into only five groups with genetic adaptation to different locations and depths. The other surprise is that the Arctic Ocean has a very diverse virus population.

Each litre of seawater is typically home to billions of viruses, 90% of which have not yet been classified to a known group. Most are harmless to humans but can infect marine. They play a little-known role in the chemistry of the seas and influence other marine microbes including bacteria, fungi and plankton that produce more than half the oxygen we breathe and absorb atmospheric carbon dioxide. As one researcher explained, "Without microbes, the Earth, its oceans, and even our human bodies come to a halt”.

Florida Atlantic University's Harbor Branch Oceanographic Institute has, for more than 30 years, collected sea sponges and other macro-organisms from the US east coast, Gulf of Mexico, Caribbean, plus European and African deep waters. Many contain large populations of microbes, some of which can be grown under laboratory conditions.

As a result, the Harbor Branch Marine Microbial Collection boasts some 19,000 diverse micro-organisms, of which 11,000 come from depths below 45m, yielding more than 1000 strains of actinobacteria (one of the most prolific microbial groups for natural products). Actinomycetes are the basis for more than half of our current antibiotic drugs. Another marine bacterium from the western Pacific Ocean could help to fight staph infections, which are a growing global hospital issue.

The abyss aside, seamounts are hotspots for corals, sponges, and deep-sea species. They are also attractive for potentially destructive deep-sea mineral extraction. Deciding how we protect them today could save lives tomorrow.

It’s not only in warm California that the seas are giving up their medical bounty. Cold oxygen-rich waters on the Scottish west coast are fruitful hunting grounds. Carefully selected starfish from waters around Oban contain anti-inflammatory chemicals that could lead to new asthma and arthritis treatments.

Other organisms are being investigated for novel bioactive compounds with great medical potential. As a marine expert said, “nature is a fantastic designer: it's constantly making new things and testing them, it's been doing it for eons".

Simply to survive, an extraordinary range of creatures and plants have to adapt to extremes of temperature, pressure and darkness — and it's this hardiness that makes them so attractive to scientists.

What is "findable" on land has probably already been discovered. But only 5% of the seas covering more than two thirds of Earth's surface have been explored so far. Many new technologies are now available for more methodical and scientific screening. The result is an explosion in useful data marking the way towards final products.

However, if nature can’t offer solutions, synthetic molecules might be able to — and they don’t lead to drug resistance. Synthetic molecules are laboratory designed and developed polymers formed of large molecules made from smaller, simpler molecules. To be used as an antibiotic, a synthetic molecule has to be effective against bacteria without damaging other body organs and biodegradable.

Some synthetic molecules have been designed to attack bacteria by destroying their protective membranes, as the natural immune response would do, or by preventing genes with resistant properties from being transmitted between bacteria. Another approach uses synthetic molecules as antibiotics that make bacteria “explode”, though this has risks. Other research is developing synthetic molecules that kill bacteria from the inside out, leading to complete degradation in three days.

But laboratory-produced molecules are more expensive that natural ones. Which is why following doctors’ orders, minimising antibiotics use, and protecting the vital environments we increasingly rely on for new discoveries, is a good strategy.