Ice and snow on paths can contribute to slip and fall accidents, many of which will result in injury. Gordon Tranter considers the steps to take to avoid the risk to employees and third parties. 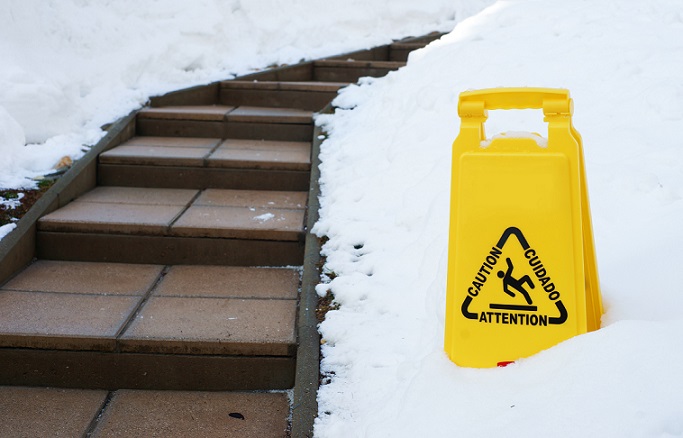 Minimising the risks from snow and ice

The Health and Safety at Work, etc Act 1974 places a responsibility on employers and the occupiers of land and premises, so far as is reasonably practicable, to ensure that such land and premises are maintained in a condition that is safe and without risk to either their employees or other persons on the land or premises.

The Workplace (Health, Safety and Welfare) Regulations 1992 (WHSWR) require, so far as is reasonably practicable, that every floor in a workplace and the surface of every traffic route in a workplace should be kept free from obstructions and from any article or substance which may cause a person to slip, trip or fall. The Approved Code of Practice to WHSWR, L24, interprets this as: “Arrangements should be made to minimise risks from snow and ice. This may involve gritting, snow clearing and closure of some routes, particularly outside stairs, ladders and walkways on roofs.”

It is not essential, therefore, to ensure that every piece of land is totally clear of snow and ice at all times. However, persons using the land and premises should, so far as is reasonably practicable, be kept safe from injury due to slip hazards including ice and snow.

A risk assessment, as required by the Management of Health and Safety at Work Regulations 1999 (MHSWR), should be carried out before cold weather conditions that could bring ice and snow occur. This should identify the foreseeable risks of slips and falls being caused by ice and snow including any vulnerable workers who may be affected. The assessment should be used to develop a plan to ensure that reasonable precautions to minimise the risks to employers and visitors are taken.

The plan should consider the following.

Although it is called grit, the grit used for treating footpaths and roads is actually rock salt, which lowers the freezing point of moisture on the road surface and so prevents ice forming while melting existing ice or snow. If enough salt is not available, ash and sand will provide grip underfoot.

Gritting should be carried out when frost, ice or snow are forecast or when walkways are likely to be damp or wet and the floor temperatures are at, or below freezing. It is best to grit early in the evening before the frost settles and/or early in the morning before employees arrive. Salt needs sufficient time to dissolve into the moisture on the floor.

The importance of when gritting is carried out is illustrated in Case Study: Icy Conditions Cause Rise in Accidents at University on the HSE’s website. When a university in the north of England was hit by a cold snap, with lots of frost and some snow (something that occurred regularly), there was a notable rise in serious slip accidents. An investigation revealed that the people most affected were those who arrived on site early in the morning. At the time they arrived, the paths had yet to be cleared of ice and snow. In previous years, the ground staff had begun to de-ice and salt the campus much earlier in the morning. However, as they were paid overtime rates, cost became an issue, so the ground staff starting time was changed to later in the day. It was thought that after the change in the start time, there would still be sufficient time to prevent any problems with ice, however, the accidents showed that this had not happened.

Claims for compensation for injuries

Employees and others can seek compensation for injuries resulting from slips and falls caused by snow and ice by bringing civil actions for personal injury. As with all personal injury claims, the claimant will need to prove that his or her injury was caused as a result of someone else’s negligence.

There are concerns about legal actions arising from injuries caused by slips and falls on icy pavements and public spaces that have been cleared. However, the Department for Transport has stated: “It’s unlikely that you’ll be sued or held responsible if someone is injured on a path or pavement if you’ve cleared it carefully.” In practice, common sense should be used to ensure that the pavement or pathway is not made more dangerous than before. People using areas affected by snow and ice also have responsibility to be careful themselves.

The cases of Bloxham v Swan Hunter Shipbuilders Ltd and Fildes v International Computers established that a system for controlling the hazards of snow and ice discharges the duty of the employer if it meets best practice. It is not expected to extend to unreasonable lengths.

Workers whose work requires them to go out at all times of day and in all kinds of weather may have to walk over snow and ice that has not been cleared and risk injury. In the case Kennedy v Cordia, Tracey Kennedy was employed as a home carer by a company which provided services for Glasgow Council. During a period of extended wintry weather, while on her way to visit an elderly lady, she slipped and fell in icy/snowy conditions and injured her wrist.

Ms Kennedy claimed that her employer, Cordia, had not adequately assessed the risk and had not provided the correct work equipment. Her employer had not provided crampon-like shoe attachments that would probably have prevented her fall. In the first court hearing in the Court of Session, before a single judge, she won. On appeal by the employers to a court of three judges in the Court of Session’s Inner House, she lost (3–0). Ms Kennedy appealed to the Supreme Court in London, where the five judges found unanimously in her favour.

The Supreme Court ruled Ms Kennedy was “at work” when travelling between clients. It was an integral part of her work. A reasonably prudent employer would have carried out a risk assessment — and had they done so, they would have learned that attachments were available at a modest cost to reduce the risk and had been used by other employers in a similar position.

It should be noted that from October 2013 onwards, the Enterprise and Regulatory Reform Act 2013 removed the use of a breach of health and safety regulations as a basis for claims. In this case the Supreme Court ruled that, although a breach of the requirement of MHSWR to carry out a risk assessment is no longer the basis for a claim, a risk assessment is still the first step in determining what precautions a reasonable employer should take in order to fulfil its common law duty.