In part two of his review of the occupational health issues associated with eye health, Gordon Tranter focuses on protection from damage caused by exposure to high intensity ionising and non-ionising radiation and the risk of damage from visually demanding work. 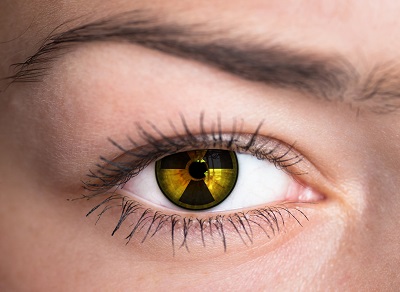 IR occurs as either electromagnetic rays (eg X-rays, gamma rays and very short wavelength ultra-violet radiation (UVR)) or high energy particles such as electrons and neutrons. Employees can be exposed to radiation at work from a radioactive material or by using X-rays, eg in health care or industrial radiography.

The transfer of energy from IR to molecules in the cellular structure causes injury to living tissue. At low doses, the cell can repair certain levels of cell damage, but at higher levels, cell death results — and at extremely high doses, cells cannot be replaced quickly enough and tissues fail to function.

Sudden exposure to IR may cause immediate eye damage, including acute corneal erosions (a loss of the corneal epithelium, the clear front surface of the eye) and tissue death (radiation necrosis) in multiple layers of the eye, including the lens and retina. Delayed symptoms of exposure to IR sources can develop from within a few days up to a year after exposure.

The Ionising Radiation Regulations 2017 (IRR) require controls on exposure to be implemented to prevent eye damage. IRR requires employees not to be exposed to IR in excess of specified dose limits, which includes a dose limit for the lens of the eye. For employees of 18 years of age or above, the limit on equivalent dose for the lens of the eye is 20mSv (6mSv for trainees aged under 18 years) in a calendar year, whereas the limit . for any person other than an employee or trainee, including any person below the age of 16, is 1mSv in any calendar year.

IR eye burns require immediate medical treatment. First aid, such as immediately flushing the eye with cool water, should be provided until the injured person can be transported for medical aid to stop further injury to the eye. This should be followed by careful long-term follow-up to monitor acute changes in corneal and conjunctival epithelial erosions and to assess for late complications.

Outdoor workers are at risk of damage to the eyes from UVR from the sun. Excessive UVR exposure over a short period of time causes photokeratitis and photoconjunctivitis, which may be compared to sunburn.

People who stare fixedly at the sun without adequate protection can receive retinal damage (blue-light hazard).

Repeated exposure may cause non-malignant clinical lesions of the cornea and conjunctiva such as climatic droplet degeneration (discrete areas of yellow protein deposits in the cornea and conjunctiva), pterygium (an overgrowth of the conjunctiva on to the cornea) and, probably, pinguecula (small yellow growths in the conjunctiva). Long-term exposure to UVR is believed to increase the chance of developing cataracts and macular degeneration. Current evidence suggests that different forms of eye cancer may be associated with life-long exposure to the sun.

Where an employee works outside in the sun, the employer should ensure that the eyes can be protected by wearing a hat, eye shades and using sunglasses that exclude both direct and reflected UVR. It is important that the sunglasses incorporate wrap-around protection and are not fitted with small lenses. Sunglasses with small lenses offer inadequate protection and may actually increase risk of eye damage by causing dilation of the pupils and allowing the entry of more UVR into the eye from around the periphery of the sunglasses. The user must be made aware that sunglasses can exacerbate the effect of the marked change in light levels when moving indoors from bright sunlight.

Most NIR is generated deliberately, but some — such as the UVR produced during welding operations — is a bi-product of a process. NIR varies in energy from short wavelength high energy UVR to low energy, low frequency radio waves. A danger to the eye is that, with the exception of visible light, non-ionising radiation is not registered by the eye and the pupil will not close to protect the retina.

The Control of Artificial Optical Radiation at Work Regulations 2010 (AOR) require employers to protect the eyes and skin of their workers from exposure to hazardous sources of artificial optical radiation and not exposure to sunlight.

The HSE publication Guidance for Employers on the Control of Artificial Optical Radiation at Work Regulations (AOR) 2010 recommends consideration of the following actions to control exposure:

If, after implementing these controls, workers are still likely to be at risk, it may be necessary to measure or calculate the levels of AOR to which employees are likely to be exposed and compare the levels with the following standards or recommendations:

UVR is the most common cause of radiation injury to the eye. Prolonged or unprotected exposure to UVR from sunlight or artificial UVR sources such as bright welding arcs, electric sparks, lasers or tanning lamps can cause radiation eye burns.

The damage to eyes from exposure to artificial UVR takes the same form as from sunlight: photokeratitis, photoconjunctivitis and photochemical damage to the retina (blue light hazard). Exposure to the intense light from welding arcs can lead to a condition called arc eye in which UVR causes inflammation of the cornea and can burn the retinas of the eyes.

In some circumstances, the use of light bulbs that give off UVR could give rise to a dose of UVR in excess of the established international guidelines. There is evidence that under certain exposure conditions, some lighting systems using unfiltered tungsten halogen bulbs may emit unacceptably high levels of UVR. Other research indicates that compact fluorescent lights, also known as low-energy light bulbs, present the same issue. Advice is available in the HSE report Ultra-violet Radiation Exposure from General Workplace Light Sources, OC 559/9 Version 2.

Where there is a risk of exposure to UVR, the eyes should be protected by UV filter glasses. Welding masks include a window covered with a filter known as a lens shade, through which the welder can see to work. The level of shade provided by the filter can be either fixed shade or variable. Fixed shade welding masks normally have a set shade rating of 10 and are best for regularly welding the same materials. Variable shade masks come in a range of darkness levels, rated from 9 to 14, with 14 being the darkest. As different types of welding produce varying amounts of heat and light, a welding mask that provides the right level of shade should be chosen. The most modern welding masks — auto-darkening welding helmets — use an electronic LCD shutter that darkens automatically when exposed to the welding arc so the welder can work under normal ambient light while wearing the helmet.

Workers who are at risk of arc eye injury even when they are not involved directly in the welding process should wear eye protection to protect them from accidental exposure to a welding arc.

The steps required to control exposure to laser light depend on the power of the laser. Lasers are classified into four classes and some sub-classes. These range from Class 1, where the output power is below the level at which it is believed eye damage will occur, to Class 4, the most powerful, which can cause injury to the eye. Full details of the safe use of lasers are given in PD IEC TR 60825-14 Safety of Laser Products: A User’s Guide, available from BSI.

There is evidence that prolonged exposure to blue light (380–480 nm), which is emitted by certain industrial applications, may permanently damage the eyes, contributing to the formation of cataracts and to the destruction of cells in the center of the retina. Where there is a risk from workplace exposure to blue light, yellow-tinted lenses or visors should be worn.

Infrared radiation is fundamentally less damaging than UVR; however, workers in steel manufacturing, glass melting and blowing operations, as well as electric welding, should be protected against exposure by wearing safety glasses with appropriate filters.

Heating is the main biological effect of microwave radiation and radiofrequency fields. There are reports that exposure to low levels of microwave radiation, particularly pulsed radiation, can affect susceptible parts of animals’ eyes. To date, no adverse health effects from low level, long-term exposure to radiofrequency or power frequency fields have been confirmed, but scientists are actively researching in this area.

Exposures to higher levels that might be harmful are restricted by national and international guidelines. The current debate is centred on whether long-term low level exposure can evoke biological responses.

A laser produces an extremely narrow beam of light with a very high concentration of light energy. It is usually monochromic, having just one light wavelength present. Lasers are available from the UVR to the far-infrared.

The damage can be brought about by:

These effects depend greatly on wavelength.

Workers with visually demanding jobs, tasks that require near work, intense visual work and use of display screen equipment (DSE) for prolonged periods, can develop visually-related symptoms. The symptoms include headaches, eyestrain, eye irritation, glare sensitivity, near-blurred vision, slowness in focusing from distant to near and back, intermittent double vision and transient distant blur.

There is no evidence that DSE work causes any permanent damage to eyes. However, prolonged spells of DSE work can lead to tired eyes, discomfort, temporary short-sightedness and headaches. In addition, DSE work can bring to light eyesight problems not detected previously.

The Health and Safety (Display Screen Equipment) Regulations 1992 set out the safety and health requirements to protect people who work with DSE. The regulations require the employer to perform a suitable and sufficient analysis of DSE workstations to assess the health and safety risks to which the users are exposed. The regulations include several requirements for the screen to aid vision.

The lighting conditions must take into account the type of work and the vision requirements of the user and should:

The angle of eye gaze to the screen is an important factor in preventing eye strain. The screen must swivel and tilt easily and freely to suit the needs of the user.

Low humidity, which can be generated by the heat from computers and other equipment, can cause soreness of eyes and discomfort for some contact lens wearers. Consequently, the employer must maintain an adequate level of humidity.

Employees are entitled to ask their employer to provide an eye test if they habitually use DSE as a significant part of their normal work. The eye test is a full eye and eyesight test by an optometrist. If the test shows that the employee needs special corrective appliances (normally spectacles) that are prescribed for the distance the screen is viewed at, their employer has to pay for spectacles. If an ordinary prescription is suitable for the DSE work, the employer does not have to pay for the spectacles.