In 2016, the Ellen MacArthur Foundation published The New Plastics Economy, a detailed blueprint for a global circular economy in plastics. This was followed up in 2017 by Catalysing Action. Caroline Hand summarises the findings and recommendations of the highly influential 2016 report, which informed and inspired many of the current campaigns against plastic pollution. The good news is that, here in the UK and Europe, we are already “ahead of the game” when it comes to recycling, but much remains to be done to protect the world’s oceans from plastic pollution. The report has a specific focus on packaging, which is particularly prone to “leakage” into the environment. 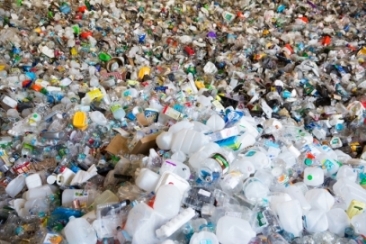 The problem of plastics

Life today would be unimaginable without plastics, and the amount we manufacture on a global scale is expected to double over the next 20 years. However, as most people are well aware, plastic does not break down in the environment and is accumulating at an alarming rate in the world’s oceans.

When proposals for UK carrier bag taxes were under discussion, the most convincing argument in their favour was the great harm that discarded bags cause to wildlife, both on land and in the marine environment.

Shockingly, we are currently dumping the equivalent of one waste truck’s worth of plastic packaging into the ocean every minute, and unless effective action is taken this is predicted to increase to four per minute by 2050. By 2050, the weight of waste plastic in the oceans would be greater than the total weight of fish.

Even if the dumping stopped tomorrow, the amount could only stabilise as this plastic does not decompose. Furthermore, many packaging products contain chemical additives that can leach out into the water causing harm to sea creatures.

Plastics are eminently recyclable. But on a global scale, only 14% of plastics are recycled, with a smaller percentage going for energy recovery. Around 42% of plastic waste is landfilled, and the remaining 32% escapes to the environment. Most of this “leakage” occurs in Asia, which lacks the necessary collection infrastructure.

The picture in the UK is much more positive — in 2016, we recycled almost 45% of the plastics packaging generated (Department for Environment, Food & Rural Affairs (Defra) 2016 statistics), exceeding our national target under the EU packaging directive. And for the EU, the Circular Economy action plan sets a plastic packaging recycling target of 55% by 2030.

Aiming for a circular economy

In a circular economy, resources are cycled rather than being lost. For plastics, this would mean much higher levels of reuse and recycling. Another type of “cycling” is the return of organic nutrients to the environment.

As it is unrealistic to expect developing economies to achieve the same recycling levels as Europe in the short term, there is a pressing need to develop plastic packaging that will break down naturally in the sea. Today’s “compostable” or “biodegradable” plastics either require the high temperatures of an industrial composting plant, or else fragment into tiny pieces that can be ingested by animals.

The New Plastics Economy sets out a three-pronged attack to overcome these problems.

The high levels of recycling achieved in Europe indicate that the barriers to greater circularity are not technical. For example, Materials Recycling Facilities (MRFs) now employ near-infrared sorting technology that can segregate out different types of plastic, while some reprocessors are able to take the previously rejected pots, tubs and trays as well as the more profitable PET stream.

According to the report, the barriers lie in the fragmentation and diversity of product standards and collection systems. Here in the UK, Defra is already looking into the possibility of increasing standardisation in local authority recycling collections. Waste charity, WRAP, has published a detailed framework for consistency in recycling. This is relevant to local authorities, reprocessors, manufacturers and the waste management industry.

On an international scale, product standards could be developed with recycling in mind. If there was greater transparency and consistency in formulations (particularly when it comes to potentially hazardous chemical additives), it would become feasible to recycle far more packaging into food-grade plastics rather than low-grade applications. Clear, standardised labelling — perhaps using chemical markers — would help in this.

The vision of the Ellen MacArthur Foundation is for a global co-ordinating body which could set standards and broker cross-sectoral collaboration between packaging manufacturers, consumer goods manufacturers, reprocessors, government bodies, NGOs and the waste and resources industry.

In Scotland, this process is already under way with the launch of the Scottish Materials Brokerage Service, created to match up the supply of recyclables with the demand for good quality reprocessed materials.

Stop leakage into the environment

As previously mentioned, most of the leakage originates in Asia, which does not have the organised waste collection systems we take for granted in Europe. One way of preventing consumers from discarding used packaging is to increase its value to them. If containers are made more durable and reusable, consumers have an economic incentive to collect them.

Realistically, there is not much prospect of stemming the flood of plastics into the ocean, particularly as Asian economies grow. The best solution, according to the report, is to develop a genuinely biodegradable plastic. Sadly, we are still a long way from achieving this goal and a technical breakthrough is needed. One small success story is the Ooho! edible water container — made from extracts of seaweed and calcium chloride, it looks like a silver bubble that encapsulates a drink of water. More generally, the charity WasteAid has been set up by waste professionals to develop affordable waste management solutions in developing countries.

The report challenges plastic manufacturers to remove harmful additives from their products — or at least be more transparent about their use — in order to mitigate the damage to sea life.

Believe it or not, it is possible to manufacture plastics using greenhouse gases as the ingredient. The technology already exists to capture methane and use it to manufacture the plastics PHA (polyhydroxyalkanoates) and PLA (polylactic acid), and researchers are seeking to achieve similar success with carbon dioxide captured from emitters such as cement kilns.

Another option is to manufacture plastics from bio-based ingredients. Biomass from plants can be used to manufacture the plastics PE (polyethylene) and PET, creating a product which is identical to the fossil-based version. Other bio-based plastics differ from the oil-based plastics, but are still suitable for use, eg as yoghurt pots and plastic bags, and their properties can be enhanced through additives.

Reaching for the moon

One of the features that make this such a readable and inspiring report is its long-term vision and excitement about future “disruptive innovations”. The section on plastics reuse looks forward to the Physical internet — a global system of communally owned, reusable packaging containers that circulate around the logistics networks.

At the level of product design, researchers are seeking to use biomimicry to develop reversible adhesives so that composite packages can be more easily dismantled. Others are working on “super-polymers” created for ease of recycling and new chemical recycling technology. The encouraging truth is that some of the innovative ideas are already at a pilot stage — for example, the use of chemical markers to identify the composition of waste plastics.

While a global packaging internet and “World Plastics Council” are not going to spring up tomorrow, the progress made on packaging recovery in Europe and the USA is encouraging and this report brings home the importance of protecting the world’s oceans from the deadly influx of discarded plastic.