Speaking in Dublin before the UK general election, Irish Commissioner Phil Hogan outlined his priorities for trade as he takes up his new portfolio for the next five years from 1 December. 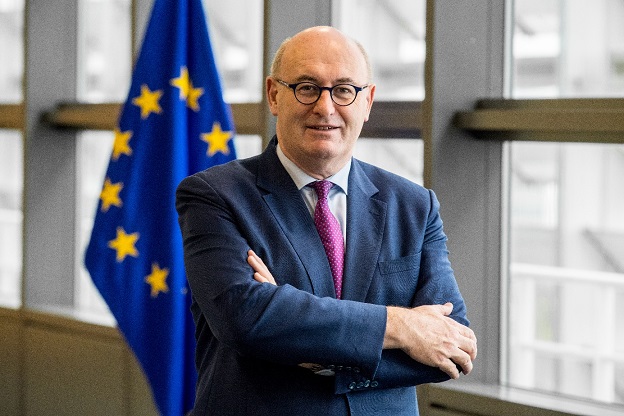 He started by addressing the question of Brexit. He said he hoped that the UK general election would bring some clarity and help to unblock the current impasse. He warned business leaders however to be very cautious as the risk of Brexit without a ratified deal is still very much there, whether at the end of January or at the end of 2020. He urged them therefore to continue their work on Brexit preparedness, as the Commission is doing.

He warned against speculating about whether an extension of the transition period beyond December 2020 would be required to complete a Free Trade Agreement (FTA) with the UK. Instead he urged everyone to work towards completing the work as soon as possible. The two parties are not starting from scratch and he believes many areas of alignment should be able to be squared off relatively quickly due to the high level of convergence already in place. There is the option of extending the transition period further but he urged the UK government to focus on the content of a trade agreement with the EU rather than on the timing. He suggested the urgent priority of the next UK government would be to outline its negotiating priorities, having consulted widely with stakeholders in business, civil society, politics and administration.

If Boris Johnson’s deal were to get through Parliament, Commissioner Hogan said the Commission would be satisfied that the new agreement would secure the EU’s key priority of no hard border on the island of Ireland. Northern Ireland would remain in the UK customs territory and at the same time benefit from access to the single market without tariffs, quotas, checks or controls. He said however that the EU would require “solid guarantees of a level playing field in relation to state aid, labour and environmental protections, and taxation arrangements. The level of ambition of any future free trade agreement is entirely dependent on adequate protection of the EU single market”. Commissioner Hogan said that the UK trade negotiation was only one among many European trade priorities.

The Commission President Ursula von der Leyen set out her priorities for the Trade Commissioner as ensuring a level playing field for all, strengthening Europe’s global leadership, supporting sustainable development and climate action, including a Carbon Border Tax and making trade more transparent. Commissioner Hogan said that the EU wants robustly to defend the rules-based multilateral order, find new accommodations with key partners like China and the US and urgently reform the WTO to make it relevant and operational again. The WTO needs reform in all its functions, as a producer of trade rules, a monitor of countries’ trade policies and practices as well as its role in dispute resolution. He pledged to continue to be very ambitious when negotiating new free trade agreements with a strong emphasis on sustainability and climate criteria built into trade negotiations and making small and medium sized companies a priority. Over 80% of EU businesses involved in international trade are SMEs.

He called on politicians, civil society and business leaders to help inform the public about the benefits of international trade which supports jobs and creates growth. He concluded by saying that this is a critical moment for multilateralism and for the fragile global trading system. “Europe needs to be the global champion of fair, sustainable and rules-based trade”.