Barrister Robert Spicer reports on the issue of foreseeable risk of injury in relation to manual handling. 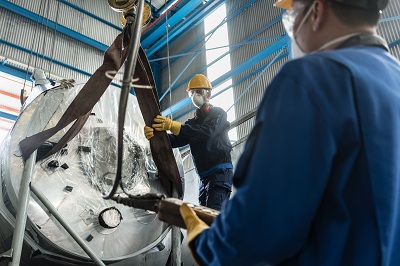 The decision of the High Court in the case of Needle v Swallowfield plc (2020) has given guidance on the issue of foreseeable risk of injury in relation to the Manual Handling Operations Regulations 1992 (MHOR).

The facts, in summary, were that N was employed by S in 1999 as a production worker and then as an engineering technician. His work involved the repair of production line equipment and machinery.

In February 2013, N suffered a fractured finger of his left hand while manually handling an unwieldy disused 48 kg pump. He carried out a large number of tasks and it was accepted that it was not possible for each task to be risk assessed in advance.

N worked on the accessible parts of the pump. He had to manipulate it to work on its underside. The pump had an unevenly distributed weight and was irregularly shaped, comprising hoses, valves and pipework. He lifted the left, lighter side of the pump with his left hand and grasped the right side with his right hand.

He was trained in “dynamic risk assessments”, which meant that skilled and experienced engineers were expected to assess the risks of specific tasks and make their own decisions. The maintenance, servicing and repair of machines and machine parts involved so many different sizes, shapes and weights of equipment that it was wholly impracticable to undertake a specific risk assessment or provide a specific method statement for each one.

Regulation 4(1) (a) imposes a duty to avoid the need for employees to undertake any manual handling operations at work which involve a risk of injury.

Regulation 4(1) (b) imposes a duty to make a suitable and sufficient assessment of manual handling operations.

At first instance the claim was dismissed. The court found that there was no real or sufficient possibility of risk of injury of some sort to hands or wrists when turning or pushing this piece of equipment, so long as employees were warned of the need to apply their experience and skill dynamically to assessing the risk and then to take appropriate care when undertaking an ordinary everyday task, by keeping their fingers out of the way.

N appealed to the High Court. The following points were made on his behalf:

The High Court dismissed the appeal and made the following points:

In the case of Koonjul v Thameslink Healthcare Services (2000), the Court of Appeal came to a similar conclusion. The facts, in outline, were that K was employed as a care assistant in a residential home for children with learning difficulties. She suffered a back injury when she bent to pull a low wooden bed from against a wall. Her claim for compensation under MHOR was dismissed at first instance because the court found that the task resulted in no significant risk of injury. K appealed to the Court of Appeal. That Court dismissed the appeal and stated the following:

It is important for employers to look further than risk assessments which are in place. In relation to the foreseeability of injury, contextual evidence is relevant. This may include evidence of a worker’s training, experience, how often the task is performed, the number of potential different manual handling tasks and the size of the employer. The risk of injury is context-specific.