Mike Sopp looks at how to manage one of the fastest growing waste streams in both domestic premises and the commercial sector. 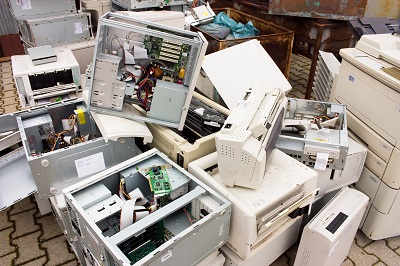 According to figures from the United Nations, some 53.6 million tonnes of electronic waste is generated annually. With businesses embracing new technologies the potential for more waste to be produced is clear.

With such equipment containing numerous substances that can be hazardous to both the environment and humans alike, sending it to landfill has serious implications. Organisations must therefore take steps to ensure they responsibly purchase and dispose of any electrical and electronic equipment (EEE).

As such, ever increasing amounts of EEE are being disposed of as waste. As the end user/owner of the equipment, organisations will be deemed to be the originator of the waste and are required to meet various legislative obligations.

More pertinent, waste producers must take into consideration the “waste hierarchy” and make attempts to prevent waste or consider its preparing for reuse, recycling or other recovery before disposal. Businesses should be applying this approach to all EEE.

The Waste Electrical and Electronic Equipment Regulations 2013 transpose into UK legislation the requirements of the EU Directive on WEEE. They aim to minimise the impacts of EEE on the environment during their lifetimes and when they become waste.

The legislation applies to a wide range of items of equipment that are detailed in schedule 2 and includes:

Although primarily aimed at those who produce (ie manufacture, sell or import) EEE, the WEEE Regulations 2013 do impact on how an end-user can dispose of WEEE.

Under the WEEE legislation, the producer is obliged to finance the costs of collection, treatment, recovery and environmentally sound disposal of the non-household WEEE for which they have responsibility. This will normally be through a “producer compliance scheme (PCS)” which will meet the producer’s legal obligations on their behalf. In reality the cost of this may be passed on to the user organisation.

For the non-household end-user, the obligation applies to the following:

If historic WEEE is not being replaced by new equipment serving an equivalent function, the end-user is responsible for arranging and financing its collection and treatment in accordance with the regulations. This may also be the case if the producer and PCS cannot be traced.

Producers can collect non-household WEEE direct from the end-user’s premises or can establish systems where the WEEE can be returned to designated collection facilities (DCF). However, non-household end-users do not have a legal right for direct collection or right of free access to a DCF.

Where the producer is responsible, end-users can come to an alternative commercial agreement with the producer whereby the WEEE becomes the end-users’ responsibility. This option can be used where the end-user wishes to control the recycling route (such as for data sensitive equipment) or the WEEE has a resale or reuse value (such as PC/ICT equipment).

Entering such an alternative arrangement could mean the end-user pays less for a new product in exchange for being responsible for making sure the WEEE is transferred, treated and recycled correctly in accordance with the duty of care.

If the producer refuses to take responsibility for non-historic WEEE (ie an item produced after 13 August 2005), the organisation should contact the appropriate environmental regulator and inform them that the producer is not fulfilling their obligations.

It should also be noted that if a business rents or leases EEE the organisation that provides the equipment will normally be responsible for disposing of it.

High-volume disposal of WEEE can incur costs for an organisation both direct and indirect.

In addition to the environmental impacts of disposal, considerable amounts of resources are lost through the production of the EEE as well as from the raw materials used in the production process. Production also entails environmental damage through mining, transport and energy usage.

Organisations can take further measures other than just returning unwanted EEE to the producer to reduce the impact that the use of electrical equipment has on the environment, particularly if the organisation has an environmental and/or sustainability policy.

The first stage is to identify the WEEE sources in the organisation, based on the range of equipment that may fall under the schedule and the age of the equipment. It is worth noting that a bar underneath the crossed-out wheeled bin symbol on the equipment indicates that the WEEE is non-historic.

The potential environmental effects and impacts in terms of disposal of the equipment, along with existing procedures and policies for the management of WEEE, can then be explored to determine if:

When buying new EEE, thought should be given to the durability of the items. Questions to ask are:

Upgrading a particular appliance can also extend the life span of electronic equipment, if the design allows. It is quite standard practice to fit larger hard disks or additional memory to computers, for example.

Computer manufacturers now design products that can be easily upgraded, enabling many of the original parts to be retained virtually indefinitely, or at least until they are beyond repair. If the equipment has failed, consideration can be given to repairing the goods rather than discarding them.

Even though a piece of equipment has reached the end of its life in one situation, this does not mean that it is no longer useable. The regulations do not restrict or prevent the selling or donating of WEEE for re-use.

In addition to traditional second hand outlets, there are a number of schemes looking at ways of passing on electronic equipment no longer required by commercial organisations to other users.

By this means, the life of products can be extended, which is environmentally more desirable than recycling them (assuming the product is working efficiently).