At a time when energy is at a premium both price-wise and supply-wise, well-run district heating networks that use spare heat from a surprisingly wide range of sources which otherwise will probably be wasted can provide important solutions. Jon Herbert reports. 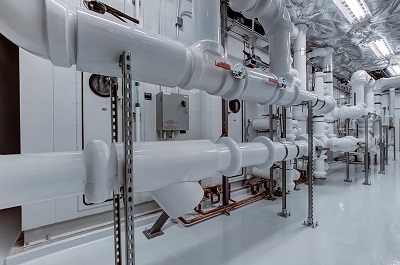 As energy costs rise and the Met Office warns that there is now a 50:50 chance of breaching the crucial 1.50C climate change temperature limit in the next five years, a key part of the Government’s Heat Building Strategy is beginning to kick in to cut both carbon use and bills.

Avoiding the need for individual boilers or electric heaters in every building, networks are a simple solution to supply low-carbon heat to UK homes, businesses and public buildings, explains the Energy Saving Trust.

Some definitions are important here. Community heating is about supplying heat to relatively small developments of one or two buildings with multiple dwellings, such as multi-storey blocks or sheltered housing complexes.

District heating, by contrast, has the wider aim of distributing large-scale heat sources over wide areas and making connections to many different buildings. However, both can be described as heat networks and offer important supply chain opportunities.

District networks are not an option for individual households or businesses but can be seen as giant neighbourhood central heating systems.

Some 2% of UK homes are currently connected to neighbourhood networks. Many more will be needed as the UK transitions from fossil fuels to net-zero, to the point where heat networks could supply circa 18% of the heat the UK needs by 2050 to meet legally-binding carbon reduction targets, says the Climate Change Committee (CCC).

This currently equates to around 17,000 existing heat networks with nearly 500,000 connections. Many are domestic customers in dense urban areas where tackling fuel poverty and reducing housing management costs are priorities.

As a UK growth sector, this has a long way to go to reach levels seen elsewhere in Europe. The city of Copenhagen is almost entirely served by district heating; circa 65% of Danish housing is connected, with not-for-profit organisations and consumer-owned co-operatives heavily involved.

However, the UK does not currently have anywhere near enough supply chain capacity to install the number of heat pumps and heat networks needed in the years to come.

The Government is also intervening with limited funding and new regulations to create a viable, self-sustaining market as it did with wind and solar energy. Because buildings are hard to decarbonise, this will be achieved through the October 2021 Heat and Buildings Strategy.

Smaller schemes were initially the norm, although much larger ones are now appearing. Technology has changed too. Networks using ground, water and air source heat pumps are replacing wood fuel-based systems. They work like domestic gas-fired systems but with no combustion in the building.

Other heat sources include:

Heat is extracted from Northern line tube tunnels at the former City Road Station in London and used to heat water that is pumped to buildings via a 1.5km underground pipe network.

One other advantage is that additional low-carbon heat sources can be added gradually over time without digging up roads and causing disruption.

From a supplier and consumer perspective, heat networks can provide stability and increase total system cost-efficiency. Over a long period, large heat networks can be a cheap and convenient way of storing energy until it is needed — especially when linked to large thermal stores like hot water tanks.

Heat networks hold great promise, but some residents have reported high bills and long periods without heating and hot water. They are also unable to switch providers.

The Government is introducing more regulation into the young sector with the aim of “making sure consumers are paying a fair price and getting a reliable supply of heating”.

Another problem which affects the supply chain is a skills shortage. Networks require specialist skills that ordinary plumbers are not trained to provide. Poor maintenance practices are another barrier. However, there are successful projects to learn from in Denmark, Germany and the UK.

Although heat networks have been in the frame since 2013, in December 2021 the Government announced a major package to help push forward its district network ambitions. This included a cash boost to supply low-carbon heating for thousands of homes, university residences and public buildings across the country.

The £19 million investment is to help set up five new heat networks — two in Bristol and three in Liverpool, London and Worthing — and is part of the Government’s Heat Networks Investment Project (HNIP) across England and Wales mentioned below.

In March 2022, the Green Heat Network Fund (GHNF) was announced as a three-year £288 million capital grant fund to support, firstly, the commercialisation and construction of new low and zero-carbon (LZC) heat networks and, secondly, retrofitting and expansion of existing heat networks. This was also updated in May.

The GHNF is open to public, private and third sectors bodies in England but not individuals, households and sole traders. It will be followed by quarterly updates until it closes in 2025.

A key challenge has been to identify third-party investors actively considering investing in the heat network sector. To help put parties in touch with each other, the Government has also published a list of investors and their intentions.

Support and guidance for local authorities developing heat networks was also updated in May 2022.

Since being formed in 2013 to address the capacity and capability challenges identified by local authorities, the HNDU has managed 11 funding rounds totalling £30 million that have supported more than 250 projects in 170 local authority areas.

HNDU is now running Round 12 with additional funding to help registered social landlords, NHS Trusts, universities, other government departments and property developers to plan for future legislation. HNDU does not fund commercialisation costs and costs associated with network construction and operation; these are covered by the GHNF capital investment programme.

The HNIP provides £320 million in capital investment support to increase the volume of heat networks built, deliver carbon savings and create conditions for a sustainable market that can operate without direct government subsidy.

As of May 2022, following an autumn 2021 consultation, the Government is running a zoning pilot to learn how heat networks can provide end-consumers with lowest cost, low-carbon heat through regulation, mandating powers and market support.

The goal in the 28 cities and towns is to work with the wider heat network industry and other partners interested in decarbonising heat.

Heat networks: guidance for developers and the supply chain

Also updated in May 2022 is guidance for heat network developers and supply chain members that include technical, financial and legal advisers.

This is available online as a collection of documents from the Department for Business, Energy & Industrial Strategy (BEIS) and the market to help develop technically and commercially optimised projects with robust business cases.

The Green Heat Network Fund (GHNF) is open to the public, private and third sectors in England, but not individuals, households or sole traders.

Support and guidance for local authorities is available from the Heat networks Delivery Unit (HNDU).

In May 2022, details of a Heat Networks Zoning Pilot were made available.