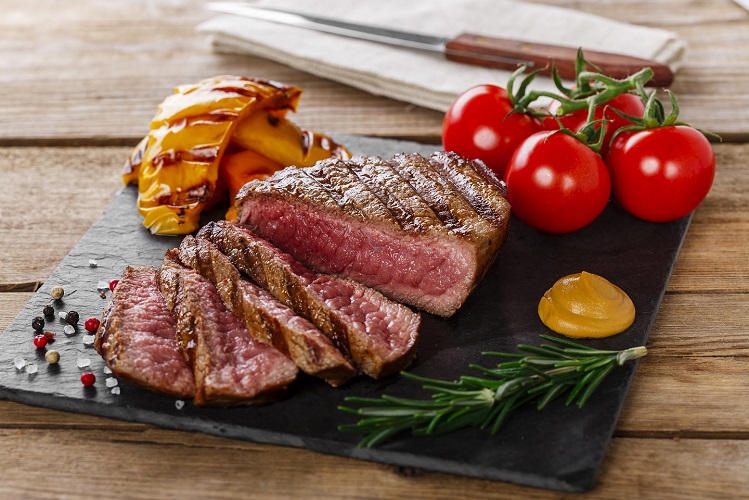 Meat has been on the menu for thousands of years, first as a sort of scavenged source of extra protein stolen from carnivores in prehistoric times, then by hunting, followed by domesticated livestock farming, through to more recent intensive animal farming practices.

Today, the meat and dairy industry is a big business and getting bigger, and the continuing rise of greenhouse gas (GHG) emissions and land degradation from this highly successful industry shows no sign of abating. Research published by the Institute for Agriculture and Trade Policy (IATP) and GRAIN shows that the five largest meat and dairy corporations combined (JBS, Tyson, Cargill, Dairy Farmers of America and Fonterra) are responsible for more annual GHG emissions than ExxonMobil, Shell or BP.

If the growth of the global meat and dairy industry continues as projected, the livestock sector could consume 80% of the planet’s annual GHG budget by 2050.

Unlike oil and gas producers, the meat and dairy industry is not covered by the emissions trading scheme and is not always required to account for the emissions it produces or to demonstrate what it is doing to reduce those emissions.

According to the AITP/GRAIN report, Emissions Impossible, only four of the top 35 meat and dairy companies provide comprehensive emissions estimates; the rest either do not disclose emissions or exclude their supply chain’s carbon footprint, which in some cases accounts for up to 90% of GHGs created.

We are what we eat. There has been much debate about whether the human species evolved as vegetarians or meat eaters. One school of thought suggests our ancestors got most of their nutrition from gathered fruits, plants and nut, with perhaps the occasional meat snack.

Others argue that we are essentially meat eaters with occasional vegetable intake to supplement our diet and that protein-rich meat helped to develop our unusually large brains, which nurtured our exceptional cognitive skills.

The answer lies in our anatomy. On the one hand, we don’t have the canine killer teeth of higher order predators such as lions and tigers to rip raw flesh apart and our stomachs aren’t big enough to hold huge chunks of meat. On the other hand, our gut isn’t long enough to rely entirely on a plant diet and our natural bacteria isn’t as efficient as other herbivores at digesting plants. We are, it seems, omnivores.

A brief history of diet

For almost their entire history, our homo sapien ancestors lived as nomadic hunter-gatherers and survived by the seasons on a mixed diet of meat, fish, nuts and seeds and vegetables. This rich and varied diet is thought to be largely responsible for survival and expansion of homo sapiens over other hominins, including our close cousins, homo erectus and the Neanderthals.

Over thousands of years, hunter-gathering gave way to farming and herding and the first agricultural revolution was born. Animals were first domesticated in the Neolithic period, around 13,000 BC, and by the time of the early civilisations, cattle, sheep, goats and pigs were being raised on farms and domestic food crop cultivation was well underway.

The mid-20th century marked the start of the so-called Green Revolution, which brought in chemical fertilisers, herbicides and pesticides to support new strains of crops for animal fodder and food production. Agricultural crop production expanded, particularly in developed countries, with significant increases in livestock production and an abundance of fodder crops to support it.

Industrial animal agriculture is a relatively recent development brought about through scientific and technological advances. The discovery of vitamins in the early part of the 20th century, followed later by the discovery of antibiotics and vaccines, significantly reduced disease and led to huge increases in livestock numbers and animal feed.

Factory farming, including more selective breeding, took off in the UK, Europe and the USA in the mid-1960s, and became a global phenomenon by the end of the century, replacing more traditional livestock rearing practices. Europe and North America were the dominant meat producers at this time. In recent years, Asia’s share of the market has increased 15-fold, while Europe and North America's meat output has doubled.

The average annual amount of meat consumed per person globally has also doubled in the past 50 years, from around 23kg in 1961 to 43kg in 2014, driven mainly by increases in average incomes and by population growth.

The meat industry is expanding, and continues to deliver high returns on investment. Worldwide production has tripled over in four decades and increased 20% in just the last 10 years. The statistical portal, Statista, observed the market value of processed meat, which includes red meats and poultry, is expected to rise from around $714 billion in 2016 to over $1.5 trillion by 2022, representing an annual 7% compound growth rate.

As a contributor to global warming, meat is responsible for 18% of all GHG emissions, measured as carbon dioxide (CO2) equivalent — a higher share than transport, according to the UN Food and Agriculture Organization (UNFAO). Research by the Worldwatch Institute’s Nourishing the Planet project explains how animal waste from enteric fermentation (burbs and farts), releases methane and nitrous oxide — GHGs that are 25 and 300 times more potent than CO2, respectively.

The sheer scale of the GHG footprint of livestock production is staggering. Data from the UNFAO estimates total emissions from global livestock at 7.1Gt of CO2-equiv per year, representing 14.5% of all anthropogenic GHG emissions. Cattle are responsible for the most emissions, representing about 65% of the livestock sector’s emissions.

Food’s carbon footprint accounts for around 25% of each household’s total carbon. Data published by the US Department of Agriculture (USDA) shows the footprint for meat and dairy is considerably higher than for fruit and vegetables.

The UK’s Agriculture and Horticulture Development Board (AHDB) claims emissions from UK livestock production is only around 5% of total UK emissions. To meet The UK Low Carbon Transition Plan targets, farming needs to reduce emissions to at least 11% below the predicted global warming potential (GWP 100) levels by 2020. AHDB says this is technically achievable by improvements in breeding, feeding and general farm management. But rather than cutting back on meat production, the industry is seeking to increase livestock.

This is entirely the wrong approach, according to the Committee on Climate Change (CCC), which argues that the number of sheep, lambs and cows grown for consumption across the UK should be cut by up to 50% to help reduce methane emissions and tackle climate change. Its recent report on land use diversification recommends farm subsidies to increase the proportion of land covered in forest from 14% to 19% and to restore peat bogs to maximise the effectiveness of woodlands and wetlands as carbon sinks.

Meat production — a waste of space?

Balancing the production of meat with growing global demand for food is a major societal challenge. Feeding livestock with fodder crops, such as grain, is an incredibly inefficient way to feed a growing population. A report in the National Geographic points out that the calorific yield of meat is about one-fifth of the grain needed to produce it. In other words, eating meat is effectively throwing out 80% of the calories that could be eaten directly as food.

For most of the last decade, the world has consumed more food than produced and part of the reason is that much of the available arable lands are used to graze animals and grow fodder, rather than food for human consumption. “Agricultural productivity growth is only 1–2% a year,” warned Joachim von Braun, Director General of the International Food Policy Research Institute in Washington, DC. “This is too low to meet population growth and increased demand.”

A UN’s report on world food security shows global hunger affects 815 million people, or 11% of the world’s population, and is likely to get worse as population grows toward the projected 9 billion by 2050. A further UN study calculates that the calories lost by feeding cereals to animals, instead of using them directly as human food, could feed an extra 3.5 billion people.

The meat industry’s response is to open up more non-arable land to grow more animal crops. The Amazon rainforest has been facing severe deforestation for decades. While there are many demands on the Amazon’s natural resources, including arable farming, one of the main causes of deforestation is cattle ranching, particularly in Brazil, one of the world’s largest exporters of beef. Last year, the Brazilian Environment Ministry proposed the release of 860,000 acres in the National Forest of Jamanxim for agricultural use, mining and logging. The recently elected Jair Bolsonaro plans to do more of the same and says he may take Brazil out of the Paris Agreement.

What to do about meat

The continuing rise of meat production is unsustainable, both in terms of the threat to climate change and the amount of land needed to graze and feed this expanding industry.

The US FAO argues that efficient practices are key to reducing emissions, including better feeding techniques to reduce methane emissions. It also calls for improved breeding and animal health, and better management of grazing lands to create carbon sinks to help offset livestock sector emissions.

Financial incentives such as abatement subsidies and carbon credit markets, and “polluter pays” mechanisms (emissions tax, tradable permits), have also been gaining traction in recent years. If carbon trading works for other big GHG emitters such as the oil and gas industry, then why not for livestock farming, the argument goes. There is also growing evidence that too much processed meat is bad for health, including links to cardiovascular disease and cancer.

A meat tax could copy those levied on tobacco, alcohol and sugar. Analysis from the investor group Farm Animal Investment Risk and Return (FAIRR) is advising investors that meat will indeed likely be taxed in the future. Germany, Denmark and Sweden are considering introducing a meat tax, and FAIRR speculates this will become a reality once countries try to meet the Paris climate accord’s targets.

A recent study from researchers at the Oxford Martin School calculates that a meat tax would reduce consumption by about two portions per week in high-income countries and by 16% globally. The effect would be to lower global GHG emissions by over 100 million tonnes, mainly due to lower beef consumption.

A recent and more radical alternative is to produce meat artificially. Meat grown in a laboratory may seem bizarre or even utopian but there have been successful trials. “Clean meat” could be coming to a supermarket near you in the next three or four years.

New start-up companies such as MosaMeat, JUST and Memphis Meats are engineering beef, chicken and other meats in laboratories from animal cells. The process, known as cellular agriculture, is at this early stage in the development and expensive.

However, this fledgeling industry is attracting a lot of interest. Cargill, one of the largest global agricultural companies, has joined Microsoft boss, Bill Gates, and others to invest in this new nascent technology. Richard Branson is investing Memphis Meats and Tyson Foods, the largest meat producer in the USA, has acquired a 5% share in Beyond Meat, a Californian company developing plant-based meats.

What the future holds

The growth of the livestock and meat industry is a product of improving agricultural technology and a growing, more affluent population, and there’s no simple solution to solving the climate change and land use problems the industry has created. A combination of better livestock management, tax incentives and meat made in laboratories may prove vital to solving these problems in the medium to long term.

In the meantime, it’s down to the consumer. Would a tax hike reduce demand? Possibly. Maybe the traditional meat eaters among us would be happy to forego the occasional burger for a healthy vegetarian or vegan meal. A gradual change in the national diet will no doubt have an influence on farming and agricultural practice in the future.