Apps are not exclusive to mobile phones. Digital monitoring, control, performance improvement, ideas-sharing and communication is revolutionising the industrial environment and helping to turn the tables on environmental impacts and low productivity. Jon Herbert reports. 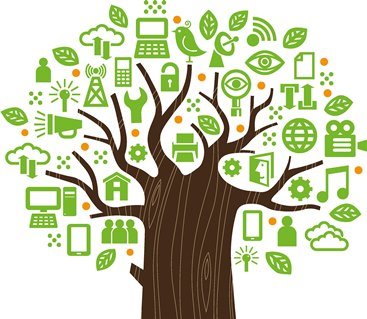 Technology isn’t just transforming personal and social communications. Similar forces are changing the way in which industrial plants, manufacturing sites and networks operate. The results include cost reductions, efficiency gains, better troubleshooting and improved safety. They also mean more real-time monitoring and responsiveness at a fundamental level in hard-to-reach and remote places around large plant in all weather conditions.

Importantly, pollution control, heat and energy losses, waste and poor output figures also gain. In fact, industrial productivity is one of the big winners of the digital revolution. Some estimates show that productivity grew by an average of 4% in the two decades from 1990 to 2010, only to fall back again to 1% in the last five years, In fact, sustainability’s three bottom lines — environmental, socio-economic including health and safety, and traditional financial results — are all major beneficiaries.

Now digitisation in industry is moving out of the shadows and into the mainstream; step changes in the second half of 2015 are expected to pick up speed in 2016. Apps, wireless networks and digital sensors operating deep inside industrial plant may not have the same glitzy image and consumer appeal of their high-street counterparts. However, they are beginning to transform the operational world in subtle but vital ways.

Growing security threats and more demanding regulations — including those covering product and bi-product leaks with serious environmental footprints — are becoming more critical. They can lead to financial losses, heavy penalties, or both. There is now a need for 24-hour surveillance not only of centralised plant but also networks and pipelines crossing counties, countries and continents.

Fortunately, technology has been changing even faster. One key development has been a stable transition from a wired to wireless world. This is crucial. Until just over a decade ago, a wired world was thought to be revolutionary. The first wireless sensors then made a breakthrough that 10 years ago seemed quite modest. At the time, a one-to-one link (point-to-point) between an individual sensor and a gateway that allowed information to be shared on other networks was little short of amazing.

Now, mesh networks allow communication between multiple sensors and data collection points simultaneously, with the result that integrated pictures can be generated of status, risk and the most appropriate response measures. This also means that users can move freely between different access points and still keep a constant uninterrupted mobile connection.

As wireless technology has become commonplace, fears that a wired rather than a wireless environment offered more security have diminished. This is also important to digital development. Networks involving 2000 I/O points (u/output) are now typical and cost-effective in ways that wire never could be. Plants with 5000 I/O points are not uncommon. An important example is steam trap monitoring on extended sites where energy and waste costs have become major cost and environmental issues.

Steam traps, and their maintenance, are a good, far-reaching process control example where sensors can now be used successfully in large numbers. Because manual surveys are time consuming to the point of being impractical, poor steam trap maintenance is estimated to lead to energy losses of 5% to 10%. In some systems, it is further calculated that between 15% and 30% of traps may have failed. Modern monitoring eliminates this problem — something that was unthinkable in a wired world.

The benefits are not only cost but also speed. Wireless technology typically gives a 50% operational cost advantage over wired. Installation time is also cut from weeks, or even months, down to days. The success of wireless has been so great that in many instances suppliers no longer often offer wired alternatives.

There are other advantages too. Because plant-wide wireless is similar to hotspots at, say, airports, it can be used to track and monitor the safety of mobile workers. The technology has also freed many operatives who, equipped with a tablet computer, can monitor and manage plant and maintenance while on the move.

As emissions and safety regulations increase, the ability to install and operate sensors that transmit real-time information and warn of potential incidents is now feasible, relatively cheaply and extremely reliably. The downside is that cost-efficient power has to be provided to all sensors.

Stress sensors are also widely deployed, frequently to measure structural fatigue and extend the life of costly plant. Vibration analysis is another tool for extending the longevity of large plant safely without failures.

Sensors produce data. Data can be used to provide optimisation solutions, particularly where solutions tap into the power of the internet in much the same way that mobile phone technology has become focused on the development of apps with specific functions.

An important aspect of apps is that they are an opportunity for software developers to offer new competitive ideas. The same is now increasingly happening in the industrial world to a much larger degree, even though it has a lower profile than the consumer marketplace.

The internet today is a digital backbone for industry. It allows huge quantities of data to be collated, analysed and used, often in real-time, to anticipate bottlenecks, create marginal performance improvements in many different places, innovate for future efficiency gains and reduce environmental impacts.

The next logical step is the creation of technical platforms supporting digital solutions. Many developers are now competing for this promising market slot. The advent of cloud computing has seen the introduction of the so-called “platform as a service”, or PaaS, where software developers can add their own original apps and services. Paas is also user-friendly.

Launch of the Predix platform

GE has taken a leading position with the late 2015 launch of its Predix.io platform for developers in the cloud environment. The market is said to be potentially worth £147 billion. Predix has been designed to work with plant maintenance systems in the same way that Apple’s IOS operating system works with mobile devices. Most of GE’s new software applications will link directly to the group’s own hardware systems. However, there will be a significant role for independent developers.

GE chairman and chief executive Jeff Immett believes that although the internet has transformed consumer value, industry in general has still to enjoy its fair share of this innovative market.

“Industrial companies need to become digital to survive,” he says, adding, “We must turn information into insights and insights into outcomes.”

For the concept to become familiar, GE has made a number of demonstration apps available. The first is Digital Power Plant. This shows how equipment can be used more efficiently when the full potential of data gathered from sensors installed around a power plant is used. Another is Brilliant Factory, an app offering GE’s digital manufacturing capabilities for other companies to reduce unplanned downtime.

Not only can productivity losses be eliminated, hidden source of waste, emissions, energy loss and other environmental impacts can also be hunted down systematically. Predix is expected to have 20,000 new developers during 2016.