Chris Payne looks at ways in which care managers can encourage care staff who are still undecided to be vaccinated against Covid-19. 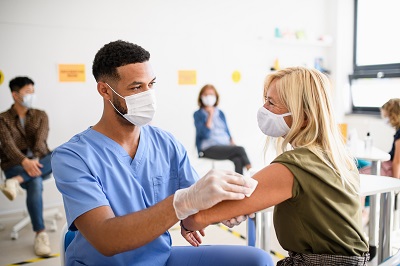 It is certainly worrying that up to February 2021 there might be nearly a third of social care workers who have not opted to be vaccinated against Covid-19, when they have been given top priority in the Government’s vaccination programme.

They have been given that priority because social care workers are at high risk of exposure to SARS CoV-2, the virus that causes the serious and life-threatening disease of Covid-19. High risk of exposure also means high risk of spreading the virus to others, not least the people receiving their care, and increases their risk of developing Covid-19. The high death rates of people in care homes and those of people receiving community services have made sobering reading throughout this pandemic.

To date there have been upwards of 500 social care workers alone and not counting colleagues in the health services, who have died from Covid-19, which is double that of other occupations. It is also likely that there is a much higher number of social care workers who have experienced less severe disease, but who might still suffer from the well-known longer-term effects.

All the evidence suggest that being vaccinated will:

All the evidence also shows that the vaccines:

The available information seems to have convinced the majority of the social care workforce without added inducements about the personal and collective advantages of being vaccinated.

What about the minority who, for one reason or another, are reluctant to step forward?

The first step is to ask why people should be so reluctant and then to see if the issues they raise can be addressed constructively using the available evidence.

This non-vaccinated remainder can be divided roughly into three types, each having distinct concerns that need different approaches. The first is probably the easiest to resolve.

Some care workers who are happy in principle to be vaccinated, might be waiting for the right opportunity to get vaccinated, because of lack of time, difficulties in getting to a vaccination centre, etc. It should be relatively easy to offer the practical help that they need by making their being vaccinated a priority and providing them with the time and means.

Others will be waiting to see how early responding colleagues have fared and will make the move in their own good time, which is their right. They might just need a gentle push in the right direction.

However, there will undoubtedly be people whose indecision is more deeply rooted — the vaccine hesitant — and there could be those, the vaccine resistant, who are basically opposed to the principle of vaccination because of their personal beliefs.

How should you respond to people in these groups?

The first step is to find out exactly what are the concerns, which are often genuine and reflect healthy critical attitudes. The concerns might occur because of:

The second step is to address the individual concerns by, for example, pointing to the publicly available information from the Government, NHS and Public Health and other reputable sources of which there is no shortage. In many cases this will provide the missing information and help to dispel some of the misinformation. Here are some examples of the more common misunderstandings.

With the vaccination-hesitant, knowledge — meaning knowledge based on scientific evidence not just on what you read in the newspapers or see on TV — should be the most powerful way of addressing these mainly legitimate concerns. A slightly different approach will of course be needed for those who are simply frightened of jabs. But they too can be reassured and offered the help they need to overcome their fears.

History has many examples of people preferring untruths to evidence-based truths, and this is as true in the present as the past with the spread of fake news and disinformation. People with fixed beliefs, ideas and delusions about the evils of vaccines and vaccination are unlikely to respond to evidence-based reason.

However, it might be worth pointing out the following.

Many more examples can be found, so when considering the advantages and disadvantages of vaccination for Covid-19 it is always important to look at the bigger picture. However, short of mandatory vaccination, which many employers are now considering through changes of contract, there will always be a small minority who remain unconvinced.

More information on the benefits of vaccination can be found in the leaflets produced by the national public health/NHS. For example, NHS England has produced a Vaccination Guide for Social Care Staff in several languages that could be issued to all staff. The leaflet includes information on the advisability and safety of people with different medical conditions, including pregnancy, on receiving the vaccine.