Stoptober, the Government’s 28-day national stop smoking challenge, officially kicked off on 1 October 2019. Vicky Powell looks at all the good reasons why employers should help workers kick the smoking habit and the best strategies to achieve this. 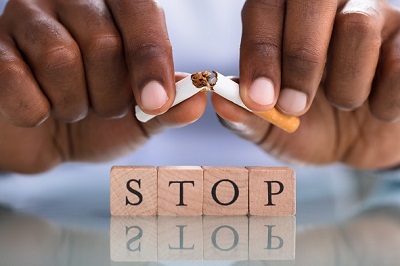 Research has shown that smokers are 34% more likely to quit when someone they work with stops smoking too, making the workplace an ideal place to promote initiatives like Stoptober and other similar programmes.

At the time of writing, Stoptober is currently active and, besides the obvious benefit of improving workers’ health, there are all sorts of financial reasons for employers to support employees who want to give up their smoking habit for good.

For workers, quitting can improve health right away, boosting immunity, circulation and energy levels very quickly. For example, just one year after quitting, ex-smokers could find their risk of a heart attack is as low as half of that of someone who smokes.

Quitting can also help workers protect the health of their families from harmful second-hand smoke, reducing their risk of developing asthma, meningitis and some cancers.

Then there’s the prospect of saving money — workers who get through a packet of cigarettes a day can save about £250 each month.

As many as two-thirds of smokers say they want to stop smoking. Employers can start by creating a workplace environment in which employees feel supported to make healthier choices overall, including stopping smoking. Organisations can tailor their interventions to help employees quit smoking as part of the wider workplace wellbeing policy.

Publicising Stoptober is, of course, one good strategy. Participants who sign up to Stoptober can choose from a range of free support tools including daily emails and text messages throughout the 28 days as well as a mobile phone app that includes various tips and advice — all of which have been shown to increase the chances of staying smoke-free.

Organisations can also encourage smokers by offering information on the benefits of stopping smoking and the range of support available, eg through the NHS’s Local Stop Smoking Services, which offer free intensive one-to-one support along with stop smoking medicines, available for the cost of a prescription.

Private healthcare companies may also be suitable for sources of corporate support.

Other useful corporate strategies can include offering encouragement, challenges and guidance through company noticeboards, staff newsletters and intranets. (NHS Smokefree and NHS Choices offer excellent sources of information about the harm associated with tobacco as well as dependency and addiction support services.)

Your Smoking at Work topic is packed full of useful Factsheets and How to... guides to help you action your strategy.

According to the NHS, interventions that can work include:

A word about vaping

In July 2016, Public Health England published advice for employers on vaping entitled Use of E-cigarettes in Public Places and Workplaces. Advice to Inform Evidence-based Policy Making. The advice says that e-cigarettes are understood to be “significantly safer” for smokers than tobacco-based cigarettes and, in contrast to the known harm from exposure to second-hand smoke, the risks to health from exposure to second-hand e-cigarette vapour are likely to be “extremely low”.

The subject is however extremely controversial. In October 2019, the US Centers for Disease Control and Prevention (CDC) announced it is investigating a multistate outbreak of lung injury associated with use of e-cigarette, or vaping, products.

As at October 2019, the CDC estimates there have been some 1080 lung injury cases associated with using e-cigarettes, with 18 deaths confirmed in 15 States.

According to the CDC, patients have reported symptoms such as coughing, shortness of breath or chest pain, fatigue, as well as nausea or diarrhoea.

In the October 2019 statement, the CDC said, “While this investigation is ongoing, CDC recommends that you consider refraining from using e-cigarette, or vaping, products, particularly those containing THC.

“If you are an adult who used e-cigarettes containing nicotine to quit cigarette smoking, do not return to smoking cigarettes.”

Despite the US position, a recent statement in September 2019 from the UK’s Public Health England via twitter said, “Our advice on e-cigarettes remains unchanged — vaping isn’t completely risk free but is far less harmful than smoking tobacco. There is no situation where it would be better for your health to continue smoking rather than switching completely to vaping.”

The TUC has reiterated its stance against e-cigarettes in enclosed workspaces with the union’s Head of Safety, Laurie Heselden, saying, “The official US investigation into serious lung diseases linked to vaping reinforces the TUC’s argument for workplace smoking bans to include e-cigarettes. The latest revelations raise worrying questions and amplify the case for precaution.”

Many health experts agree that further research is needed to better understand the long-term health impact of vaping on people.

Calls for caution on what has been described as “the rush to embrace vaping” have also been made by the Chartered Institute of Environmental Health (CIEH) and the House of Commons Science and Technology Committee in another report on vaping.

Stop smoking programmes can be life changing for successful employees. Catherine McCabe, 49, a receptionist at Lambeth Town Hall in Brixton, managed to quit a 36-year smoking habit with the support of the stop smoking team at Guys and St Thomas’ NHS Foundation Trust.

She said, “Occasionally I still have cravings but with the help of nicotine patches that soon passes. I’d never done exercise before but now I do Zumba classes with my sister twice a week and I’m starting to feel fitter.”

Smoking is the nation’s biggest killer. Every year around 79,000 people in England die from smoking-related disease.

And it’s not only about physical health. There is also a strong link between smoking and poor mental health. A common misconception among smokers is that smoking relieves stress and anxiety but research evidence shows that stopping smoking improves mental health, with a similar effect size to antidepressants.

For all of these reasons, Stoptober — or, indeed, any other month of the year — is the perfect time for employers to support workers who want to quit smoking.