This month’s selection of promising innovations includes breakthroughs which could answer some of our thorniest environmental problems — urban particulate pollution, plastics in the ocean and the difficulty of tracking supply chains. On a lighter note, fast food fans will be pleased to see that the price of an Impossible Burger has fallen dramatically since we last reported on it in our Future Foods article. 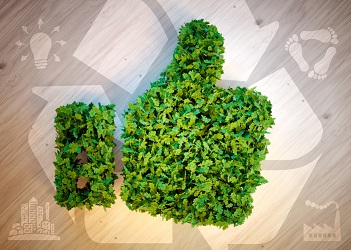 The old rhyme tells us that we may “never see a thing as lovely as a tree”, but innovators have created substitutes that while less aesthetically pleasing, can do a far better job of removing pollutants and carbon dioxide from city air. Newcastle is the first British city to install a “moss tree”: a rectangular assemblage of panels planted with moss (to absorb particulates) and larger plants (to shade the moss). This is equivalent to having 300 trees planted at the roadside. Built-in sensors linked to the Internet of Things monitor pollutant levels, air temperature, humidity and rainfall, ensuring that the automatic watering system works effectively.

Arborea’s pioneering Bio-Solar Leaf is a further step away from “real” trees but according to the team which created it, can remove carbon dioxide and produce breathable oxygen at a rate equivalent to a hundred trees, from the surface area of just a single tree. The “leaf” is in fact a community of microscopic plants — algae, phytoplankton and diatoms — growing on a structure similar to a solar panel. These plants photosynthesise in low light, absorbing CO2 and boosting the output of the panels. The world’s first Bio-solar Leaf has been installed on Imperial College’s White City campus, in the hope that it will be suitable for installation on all kinds of urban buildings.

SUNALGAE, a similar project originating in Sweden and supported by the EU, could generate an additional £0.92bn worth of clean power annually, if rolled out to the global PV industry. In tests the researchers found that by making blooms of diatomaceous algae into a coating, solar panels and cells can be made 4% more efficient, even during periods of low sunlight. The world’s first industrial-scale algae and solar plant is due for completion in 2020.

On a smaller scale, shoppers in Central London may get a breath of fresh air next time their eyes are caught by an advert. The Pluvo advertising stand uses an enclosed mist of water to remove pollutants from the air. Each stand is financed by advertising spend. Pluvo, along with their business partners KineticX, are approaching other councils with their sustainable product.

The Impossible Burger has arrived

Back in 2017 Croner-i reported on the Impossible Burger, a plant-based burger which “bleeds” like real meat. Well, it has now arrived in Burger King — albeit only in the USA at present — and costs only $1 more than a regular Whopper. The Impossible Burger is not the only vegan “beef”burger on the market: Tesco is selling a rival option, the Beyond Burger. Opinion seems to be that the flavour of the Impossible Burger is close to a beefburger, and in terms of protein, fat and salt content there is little to choose between the two. However, producing an Impossible Burger uses 95% less land and around 75% less water than traditional burgers. On the negative side, the “magic ingredient”, soy leghemoglobin, is said to have been tested on rats which has ruled it out for some vegans.

A means of recycling EV batteries

Croner-i has also flagged up the difficulty of recycling batteries from electric vehicles, which threatens to be more of a problem in the future as petrol and diesel powered cars are phased out. Leading manufacturers such as BMW are launching battery recycling schemes, and now Finnish waste management solutions provider Fortum has developed a closed-loop solution which enables 80% of an EV battery (by weight) to be recycled into new products. Plastic, aluminium and copper components are first of all stripped from the battery for reprocessing, then the remaining chemical and mineral components are taken to a chamber for chemical precipitation. This process recovers substances such as nickel, lithium and cobalt in pure, liquid form, ready for re-incorporation in new products. Fortum are hoping to roll the technology out across Europe.

A new kind of ocean plastic from squid…

Could the answer to marine plastic pollution come partly from the ocean itself? Researchers at Pennsylvania State University have created a new biodegradable plastic substitute from proteins found in squid teeth. Squid grasp their prey using suction cups on their tentacles and arms. The cups are equipped with sharp "ring teeth" that hold the food in place.

The proteins which make the teeth are similar to silk and have several valuable properties — they are flexible, strong, water-resistant, conduct electricity and are self-healing. The researchers are investigating several applications for these proteins, including a coating for textiles which would prevent the release of microfibres in the washing machine.

The proteins are created in the laboratory by genetically engineered bacteria in a fermentation process, so no squid are harmed. The next stage is to scale up the process and bring down the cost of production, which currently stands at $100 per kg.

Not to be outdone by the squid, lobsters can give us a plastic with anti-bacterial and anti-fungal properties. London design studio Shellworks has been collecting lobster shells from restaurants, extracting chitin — a biopolymer — and transforming it into a bioplastic using their own specially designed machines, Vaccy, Sheety and Dippy.

The shell is first broken down physically in a blender, after which a chemical solution is applied to extract the chitin nano-fibres. The resulting chitin powder is then mixed with vinegar to produce a liquid bioplastic, which can be moulded and heated to dry. Chitosan bioplastic could be used as a substitute for single use plastic in bags, pots and blister packages.

If we are to achieve a truly circular economy, there needs to be a means of reliably tracking products, components and ingredients throughout the supply chain. TetraPak has recently unveiled its “connected packaging platform” which promises to achieve just that. Each drinks carton is printed with an individual code which can be scanned by a smartphone or tablet. The Connected Packaging Platform links the user to a digital database, which will supply different information depending on whether the user is a producer, retailer or consumer.

Producers will be given access to historical end-to-end tracking information; retailers will be able to view real-time supply chain information and access a system which alerts them when issues occur. Consumers will be told where the product’s raw materials were farmed, where it was manufactured and how to recycle its packaging. The connected pack is an effective way of interacting with customers and increasing brand loyalty: for example, a dairy company in Spain increased their sales by 16% through a “scan and win” campaign. Each time customers scanned a code using a specially designed app they were able to collect points and win prizes.

TetraPak has already completed successful trials with the Connected Packaging Platform in Spain, Russia, China, the Dominican Republic and India, and in June 2019 it was made available across the world.