The use of a fork lift truck for complex operations should be thought through and the whole operation planned. Failure to do so can have serious consequences. People and trucks should be separated within the workplace to reduce the incidence of serious injury: this should be achieved through risk assessment. It cannot be overstated that the use of fork lift trucks must be restricted to trained and authorised persons, as can be evidenced by the cases detailed below. 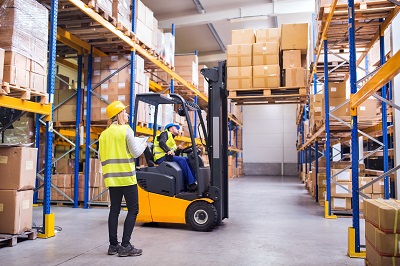 In February 2021 Kepak Group Ltd was fined after a worker suffered serious injuries in a transport incident.

An employee of a contractor based on Kepak’s site was struck by a fork lift truck in February 2017. He was walking along an internal roadway at the site when he was struck from behind by the vehicle and trapped under its metal container. He suffered multiple injuries including the loss of a leg. The company’s workplace transport risk assessment did not ensure that suitable and sufficient traffic management arrangements, including pedestrian and vehicle segregation, were in place.

In April 2021 Skillbeech Services Ltd, a warehouse and storage company, was fined following an incident in which a worker was struck by a fork lift truck.

In July 2019 the worker, a delivery driver employed by the company, was in the company’s delivery yard in Southampton. He was struck by a fork lift truck while his vehicle was being loaded. He was knocked to the ground. The fork lift truck ran over his legs, causing serious crush injuries. There were inadequate control measures in place to segregate pedestrians and vehicles at the delivery yard. The company was fined £32,000 plus £8200 costs under s.2 of the Health and Safety at Work, etc Act 1974.

An HSE inspector commented after the case that the incident could have been avoided if basic vehicle and pedestrian segregation and control measures, for example barriers, marked walkways and safe working practices had been in place.

G-Tekt Europe Manufacturing Ltd, a metal pressings manufacturer, was fined in October 2020 following an incident in which a worker suffered a serious brain injury.

In November 2018 a worker at the company’s site in Tredegar, South Wales, was struck by a fork lift truck. He suffered a serious brain injury and was placed in an induced coma. There was inadequate control of workplace transport risks. This included lack of segregation between vehicles and pedestrians, no safe pedestrian crossings where vehicle and pedestrian rotes crossed, and insufficient safety signage to highlight hazards.

In February 2020 UK Mail, a postal service company, was fined after two workers were injured by fork lift trucks in two separate incidents.

In October 2016 an employee of the company was struck by a fork lift truck at the company’s site as he was sorting returned parcels. He suffered a fractured skull. In March 2017 a warehouse operative employed by the company was inspecting a parcel. She was struck by a fork lift truck and suffered arm and hip injuries. The company had failed to ensure that there was effective segregation of pedestrians and vehicles. There were no pedestrian walkways for workers to safely navigate the site.

A spokesperson for the HSE commented after the case that the incidents heightened awareness of the need to properly assess and control the risks to employees from workplace traffic movements and a reminder that these types of failures could lead to life-changing injuries.

In May 2021 Ultimate Systems Ltd, a decking manufacturer, and a director of the company, were sentenced after a worker suffered serious injuries.

In April 2019 an HGV driver was delivering packs of plastic deck boards to the company. The packs were stacked on pallets which weighed more than 2000 kg. Andrew Kerr, a director of the company, used a fork lift truck to unload the delivery. He lifted the whole stack of pallets at once. This exceeded the load capacity of the truck. The truck tipped forward and the load fell onto the HGV driver. He suffered crush injuries to the spine, multiple rib fractures, a broken collarbone, a punctured lung and ligament damage to his neck. He spent four weeks in an induced coma. Kerr was not trained to operate the fork lift truck. There was no safe system of work for unloading the decking and no rules for visiting drivers to wait in a safe area.

No safe system of work

In July 2019 three workers were emptying waste from plastic bins at the company’s site in Wigan. They were using a fork lift truck to raise the bins to a height so that they could be manually tipped into a skip. The truck crashed into the skip. The worker on top of the skip fell. The other worker’s arm was impaled on the fork of the truck. Both suffered serious fractures. The company had not taken effective measures to ensure the health and safety of workers in relation to risks arising from the use of fork lift trucks. It had failed to implement a safe system of work and to provide adequate instruction and training. Tipping bins into the skip in this way was normal working practice which had developed over a considerable length of time and had placed workers at significant risk.

In January 2021 PCR Steel Ltd was fined following the death of a worker. In April 2019 a worker visited the premises of PCR Steel Ltd to collect a load. He carried out an unplanned lifting operation from a telehandler fork lift truck to load a metal balcony base frame onto a flatbed trailer The load was not secured and the frame, which weighed 400 kg, fell and crushed him. He suffered fatal injuries. The company had failed to ensure that the lifting operation was properly planned by a competent person, appropriately supervised, and carried out safely. There was no plan for the manoeuvring of the frames which could have considered the load’s security, size and weight. There was no plan for how the lift would be set down nor for how to exclude people from the danger zone.

Fortec Distribution Network Ltd, a pallet transport company, was fined in October 2020 following the death of a fork lift driver.

In October 2016 a fork lift truck driver was unloading material from the trailer of a large goods vehicle at the company’s pallet hub. While the vehicle’s forks were inside the trailer, the vehicle moved forward. The fork lift truck overturned. The driver, who was not wearing his seatbelt correctly, suffered fatal head injuries. The company’s risk assessment failed to identify the risk of a large goods vehicle moving away while being loaded or unloaded. It also failed to recognise that the work system in practice was different from the documented systems of work. This included the monitoring and supervision of wearing seatbelts correctly when operating fork lift trucks. The system of moving large goods vehicles was unsafe.