The UK’s high dependency on imported fresh food, coupled with failure to act on climate breakdown, is risking national food security, a committee of MPs has warned. As tensions rise over Brexit and millions protest over climate change, John Barwise assesses what the combined impacts might mean for UK trade and food security. 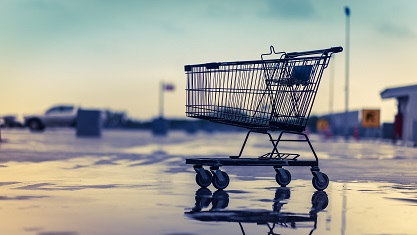 The latest inquiry from the Environmental Audit Committee (EAC) has concluded that UK food security is at risk from the combined effects of climate breakdown and Brexit. Its report, Our Planet, Our Health, published in September, goes on to accuse the Government of ‘complacency’ in the way it is handling this emerging crisis and has expressed ‘deep concern’ over the likely impacts of food price rises that will particularly affect the poorest people in the UK, and vulnerable groups like children and pensioners.

The UK has been dependent on imported food stuffs for years. At the start of the Second World War we were importing about 70% of cheese, sugar, fruit and cereals, and half our meat products and animal feed to support domestic meat production. Heavy German attacks on ships importing food was the reason rationing was introduced in 1940 and the ‘Dig for Victory’ campaign was launched.

The 1947 Agriculture Act introduced after the war was designed to lower the amount of food imported into Britain and give farmers an assured market and guaranteed price mechanism for their produce. Since then, UK food self-sufficiency in the UK has risen from around 30-40% in the 1920s to around 60% in 2000.

Today we still import around 50% of food supplies from overseas, with 30% coming from our European Union partners and about 20% coming from other countries. In monetary terms, the UK imports around £40 billion of food and drink, but only exports about £18 billion worth of food.

The concerns raised in the EAC report are two-fold: firstly, the uncertainties over the UK’s trading relations with the EU and what this means for food security if Britain leaves without a deal and, equally important, the growing concern over the food produce coming from other countries where climate breakdown is already having a major impact on production.

Mary Creagh MP, who led the EAC inquiry, said: “The health of the planet matters because it affects what we eat and whether we can eat in future. We are facing a food security crisis, exacerbated by uncertainty over the UK’s future trading position with the EU and the rest of the world. Ministers must now publish all the information they hold from Operation Yellowhammer on food security and likely costs in the event of a no-deal Brexit.”

The Operation Yellowhammer dossier is the Government’s ‘reasonable worst case scenario’ that sets out the risks in the event of a ‘no deal’ Brexit and what preparations are needed to mitigate the disruption if Britain leaves the EU without a deal. There are 12 ‘areas of risk’ highlighted, including the movement of goods and people across borders, UK food security and water supplies, healthcare and transport.

The dossier, which MPs ordered the Government to publish, states that a no-deal Brexit could trigger major hold-ups at channel ports, shortages of some foods and delays to medicine imports, with low-income groups being disproportionately affected by price rises in food and fuel.

Under the Brexit ‘no deal’ scenario, the supply of certain types of fresh food, particularly fruit and vegetables, will decrease. Other critical elements of the food supply chain (such as ingredients, chemicals and packaging) may also be in short supply.

“In combination, these two factors will not cause an overall shortage of food in the UK but will reduce availability and choice and increase the price, which will affect vulnerable groups,” the dossier states.

British retailers have been preparing for a no deal Brexit for some time but warn of inevitable shortages coupled with potential price rises and market fluctuations. Major supermarkets are stockpiling non-perishable food stuffs including tinned food, but others with a limited shelf life can’t be stockpiled.

Andrew Opie, director of food and sustainability at the British Retail Consortium, told the EAC inquiry that logistics were at full stretch and warehousing is at a premium. “It will affect fresh food in various ways, availability, shelf life and potentially cost. Our assessment is based on discussion with our members, who move fresh food every day, and the likely disruption [in Dover and Calais],” Opie added.

The UK is predominantly a net importer of food products, and whilst a high proportion of food stuffs come from European countries, about 20% of all imported fresh food comes from areas threatened with unpredictable climate change.

We currently import around 4% of fruit and vegetables from highly climate-vulnerable countries in Africa and Asia, and a further 14% from moderately vulnerable countries such as Brazil and North America. “This has implications for the UK’s food security in the event of leaving the EU,” the EAC report claims.

Added to the threat of climate chaos that is already disrupting food production, there are also growing concerns over the loss of biodiversity in many of the countries that supply food to the UK. The decrease in plant diversity in farmers’ fields is highlighted in the UN’s State of the World’s Biodiversity for Food and Agriculture which says around 20% of the Earth’s vegetated land surface has persistently declined in productivity.

The report also warns of increasing frequency of climate-related floods, storms and droughts, making food production less predictable in the future and increasing food security risks for those countries, like the UK, that import much of their fresh food from overseas.

The UK’s Climate Change Committee (CCC) has warned the Government that the increased risk of weather-related disruptions caused by climate change is likely to lead to yield losses, both in the UK and across our global supply chains. Scarcity of supply will also increase food prices, which could be as high as 20% in real terms by 2050.

The Government must rethink how food is produced globally and prepare for disruption including producing more food in the UK to improve food security and reducing dependency on imports from a handful of countries, which the CCC describes as “risky”.

But according to the EAC report, the Government has ignored the CCC’s advice on food security, choosing instead to take a “more optimistic view of the levels of resilience that are achieved through functioning markets and diverse sources of supply.”

The EAC report concludes that the Government should accept advice from the CCC on food security risks and set out a plan for maintaining UK food security in a changing climate. Producing more food in the UK would reduce the current dependency on a handful of countries, a situation described as “risky,” the report adds.

The EAC supports a National Food Strategy that recognises the risks to national food security from importing 40% of the UK’s food and establishes policies to mitigate these risks. MPs are also calling on the Government to set up a National Food Council to cover food production, nutrition and public health.

The hundreds of thousands of young people taking part in the UK were demanding the same, with the added concern that the UK is ill-prepared for the disruption to food supplies and much else, if the country leaves the EU without a deal.