Following the Liverpool Echo car park fire, it is time for all those responsible for enclosed car parks to review their risk assessment methodologies. Alan Field poses some questions that will help with a review of any current arrangements. 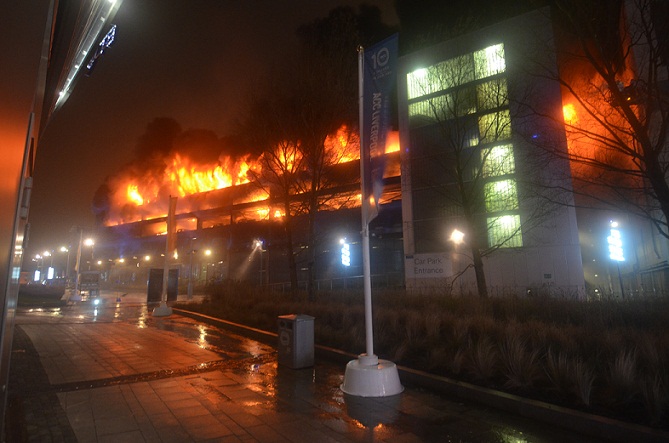 One size does not fit all

An “enclosed car park” can include many different structures of varying design, age, condition and, therefore, differing types and levels of risk. After all, closed car parks going back to the 1980s and earlier are not that unusual. The key issue, however, is that many risk assessments have considered only structural issues — not the type and composition of the vehicles using them.

Looking at the evolving risks from car fire risk assessments is not new. Back in 2006, the Building Research Establishment (BRE) published a project it undertook regarding fires in enclosed car parks. More than 10 years on from this, the points it made still have much relevance.

In broad terms, both the passive and active fire protections — or lack of them — designed into enclosed car parks at the time they were built needs to be considered in terms of current day risk exposures. This includes the number, size and material content of motor vehicles — these have continued to change even in the last five years and for car parks designed before that the changes can be even more significant.

Potentially, the older the car park, the greater the risk that fire safety assumptions will be made on models of fire initiation and fire growth involving cars whose designs have changed significantly. There is also the risk that when car parking is part of a larger structure, the main purposes of the building may have been the focus of previous fire risk assessments, including evacuation planning.

As with many types of structures, the history and use of the building needs to be considered when undertaking a risk assessment.

A building that has seen its freeholder or managing agents change a number of times may find that effective maintenance has not always taken place. In turn, this could suggest the structural integrity — that was assumed by the original architect — is no longer the case and any passive fire protection may have been compromised to a lesser or greater extent. Where the enclosed car park is part of wider site, then any change of use within the building could be significant, eg where an office building designed for one tenant is later converted into a business centre with multiple occupiers and uses. This could have an impact on matters like compartmentalisation and other important assumptions about inhibiting fire spread.

One other key determinant may be if a significant refurbishment has taken place. As was determined at the Lakanal House fire, a refurb can have unplanned consequences in certain fire situations and compromise evacuation strategies. The evacuation strategies must be based on all possible scenarios, rather than those originally envisaged before refurbishment; indeed, looking at how far a refurbishment affects fire safety should always be revisited. Arguably, the biggest enemy to all fire risk assessments is making assumptions about what has been done or accepting that past decisions must have been valid.

Older enclosed car parks may have comparatively little in terms of passive fire protection, certainly compared to more modern structures. One example is modern extraction systems to minimise smoke dispersal. Subsequent risk assessments should, ideally, have shown some evidence that the assessor understood the passive protections in relation to the construction at the time, where they existed.

Also, as with any building — particularly before whole life costing (WLC) was standard practice in architectural design — risk assessments may never have considered the fact that poor maintenance or even normal wear and tear might inhibit the effectiveness of passive fire protections in future years.

An absence of active fire protection systems in the enclosed car park (eg fire/smoke detectors, sprinklers or other extinguishing systems) also suggests that a fire risk assessment needs revisiting. This should lead to a more fundamental re-evaluation of the scenarios that might happen in the event of fire. Immediate detection of fire and the ability to knock it down is key in an enclosed car park. 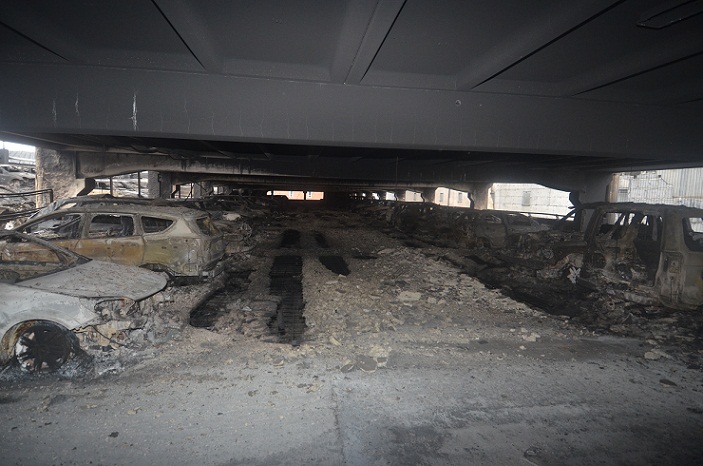 Fire protection and security can also be seen as contributing to overall risk controls for an enclosed car park. Unauthorised types of vehicles and unauthorised areas for parking may be discouraged through effective manned guarding. Where manned guards patrol the car park area this may be one means to determine the early outbreak of fire or where high-risk activities are taking place, eg a pickup truck which has legitimately parked but has propane cylinders on board.

CCTV, sometimes adopted for security purposes, can also be used for early detection of fire — this is important as it is now realised that fire spread can be rapid in a car park due to lateral fire spread from vehicle to vehicle.

In simple terms, motor vehicles have changed in many ways in recent years and even an enclosed car park designed in the late 1990s would never have anticipated the increase in the size of vehicles (think SUVs and people carriers).

The size of vehicles means the separation distance between them is less, and therefore there is more opportunity for lateral fire spread than the original car park design would have assumed.

Most domestic vehicles have a storage capacity of anything from 40–60 litres of fuel; this, multiplied by the number of vehicles in a car park, presents a significant amount of hydrocarbons. There is obviously a greater explosion risk from individual vehicles.

Larger vehicles can also mean there is simply more combustible material available to burn; the increase in gadgets and interior trim could be seen as contributing to this.

Hybrid and electric vehicles can present fire risks as well — even where there are no hydrocarbons stored there will often be lithium-ion batteries and high voltage circuits. These can catch fire or, potentially, explode in a number of scenarios, both in terms of ignition or as simply providing fuel to a fire in progress.

The evolution of motor vehicles has many impacts on risk assessments. For example, as mentioned earlier, with older enclosed car parks there will not necessarily be modern ventilation systems; incomplete combustion in a larger vehicle fire may lead to an especially high build-up of toxic gases that cannot be removed.

Another example — as found at the Liverpool Echo car park fire — is that rapid fire spread can lead to significant quantities of burning hydrocarbons (from fuel tanks compromised by thermal action) finding egress points within the structure. In any similar car park, this leads to questions about internal drainage; the way natural gravity features were designed into the structure (such as descending walkways or exit routes for vehicles); the height and separation of concrete floor plates and how they were fabricated together during construction, as well as any other local factors. This leads to questions about whether bulk foam deployment, either through fixed or mobile systems, should be considered or, alternatively, how such a hydrocarbon based fire would actually be inhibited and fought.

Car parks are often seen as a utilitarian add-on to another building use. However, this attitude can leave unrecognised a number of fire and life safety risks. Even if thorough historical risk assessments exist, they need regular re-evaluation not just because of building technologies, but developments in motor vehicles themselves. Thinking cannot remain in the 1970s on enclosed car parks. The potentially tried and tested assumptions of the past need revisiting in a systematic way.