Combatting financial and material abuse — Jef Smith looks at how home care can play a part. 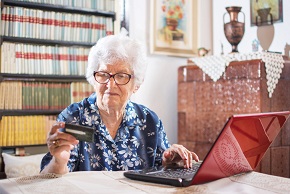 There is disagreement among professionals as to how exactly to list and separate different forms of elder abuse, but most now use a sevenfold categorisation — physical, sexual, psychological or emotional, neglect and omission, discrimination, institutional, and financial or material. Focusing on the last of these, it is important to use both words as the assets which can be stolen are by no means limited to money. In a single year, the Elder Abuse telephone helpline received calls where the total loss by victims of abuse amounted to £42 million in cash or property, and this is of course only a fraction of the amount which went unreported.

The risks associated with victimhood include isolation, loneliness, recent loss or bereavement and either physical or mental disability. All of these can be exacerbated by a lack of familiarity with financial affairs. Merely listing those factors illustrates just how many elderly people are routinely vulnerable to this sort of exploitation and how easily someone who at one point appeared quite robust can slip into being a potential target for an abuser. Happily married to an accountant, retired teacher Mr Jones, despite being in his 80s, is healthy and secure; a year later, widowed and alone, his health deteriorates and without his wife’s support the management of his finances goes seriously awry. Suddenly, he is open to easy exploitation to anyone in the know.

And who might the abuser be in such a case? Most financial abuse is carried out by family members, and the Jones children are well placed to take advantage of their father’s weakness. Given his emotional weakness after more than 50 years of marriage, he is also open to anyone setting out with less than honest motives to form or develop a relationship with him, romantic, platonic or apparently simply friendly. Then there are organised scams which identify and prey on people in Mr Jones’ situation, and businesses which find it easy to overcharge or use unfair practices. The world can indeed seem a very unfriendly environment for those with considerable financial or material resources but lacking the protection of friends or family.

Care workers too are well placed to abuse people living alone since they have access and trust, the two qualities on which abusers particularly depend. On the other hand, they are often in a position to spot signs that abuse might be taking place. These might include the sudden appearance on the scene of previously distant relatives, the apparent isolation of an older person from other friends or family members, the unexplained disappearance of valuables or money, or a surprising shortage of personal grooming items or clothing.

Other possible suspicious signs, which care workers are unlikely to be the first to notice, are suspicious signatures, sudden or unexplained changes to bank accounts or other documents, abrupt changes to wills, unpaid bills and unexplained transfers of assets to family members or others. Everyone with an official reason to be in contact with the likes of Mr Jones needs to be alert to such danger signals and, if necessary, to pass them on to safeguarding or other authorities able to intervene appropriately.

To ensure that their staff do not abuse their positions — keeping clients safe is one of the five priorities for assessing quality as defined by the Care Quality Commission (CQC) — home care agencies need robust policies and procedures on recruitment, selection, regularly reinforced training, supervision, prompt investigation of suspicions, whistleblowing and discipline. These areas of course overlap, but such are the risks involved that a doubling or trebling of precautionary action is not inappropriate. In the absence of any comprehensive national system of care staff registration, agencies also have a responsibility to report individual misdemeanours to the CQC and to the police where necessary, ensuring as far as possible that culprits do not simply go on to offend elsewhere. The fear of reputational damage is never a pretext for hushing up cases of demonstrable criminality.

Reacting to abuse or suspected abuse when it occurs is of course essential, but preventing abuse from ever occurring is an even better line of action. As with other domestic hazards, domiciliary care workers are well placed to advise older people, particularly those who seem isolated or otherwise vulnerable, on steps they might take to protect themselves. Recommending to clients that bank statements should be checked regularly, that an eye should be kept on receipts for shopping undertaken by others, that PIN numbers should not be shared, however tempting the convenience seems to be, that loans of money should be avoided wherever possible, that only trusted individuals are told the location of valuables, and that important documents are stored safely and securely — these are very reasonable steps for a worker to take, and given the trusting relationship they have often built up, their advice stands a good chance of being taken.

The cruelty of some of the scams operated on older people knows no bounds; almost all of us are vulnerable, since approaches can be extremely cunning, persuasive and plausible. In London alone in 2017 there were 4500 reported cases of fraud among over 65s, and the actual figure for incidents which occurred is almost certainly much higher. When work is undertaken on premises, only reputable companies or trusted individuals should be used — not an easy limitation to observe in many areas where the market for small but specialised projects of home repairs or equipment installation is extremely fragmented and poorly regulated.

Again, home care agencies, while having no authority in their own right, can at least warn clients of the dangers and point them in the right direction for obtaining safe help. If strangers are allowed into the home to investigate work to be done, it might be wise for a client who lives alone to arrange such a visit at a time when the home care worker can be present, at least as a deterrent to unscrupulous strangers.

Trusted workers may also be well placed to encourage their elderly service users to think ahead in ways which minimise opportunities for abusers. Power of Attorney is not used as much as it could be; all of us are at risk of losing capacity, but that risk obviously increases with age, so thinking about who might make decisions on your behalf if you were to lose capacity is a wise step though it’s not a comfortable possibility to have to face up to.

An older person who gives up their own house to move in with family members is sacrificing a good deal of their independence; they may in the process also lose control of elements of their affairs, a development which unscrupulous relatives can then exploit with impunity. Sharing one’s plans makes it somewhat less likely that one person will be able to manipulate relationships to their sole advantage.

All of these scenarios of course involve anticipating the worst, even the apparently unimaginable. It is difficult to hold suspicions of potential future abuse in one’s head at just the time when trust between relatives is a vital consideration, but circumstances can and have been known to change rapidly when once loving family members tire of caring and sense their own material advantage.

Despite every responsible precaution, even the most resilient older person can be a victim of financial or material abuse. The common immediate response is shame, self-blame rather than the outrage which any outsider would much more appropriately feel. Care workers need to remind their clients that if abuse occurs it is not their fault. The watchword must be that everyone has a right to live without being afraid and no one deserves to be harmed. It is healthy supportive relationships which should characterise old age, not those which are abusive and exploitative. Despite their evident truth, these are by no means easy messages to get across to vulnerable older people, whose failing powers and confidence incline them to blame themselves for what goes wrong rather than turning their anger on an abuser.

It cannot be remarked on often enough that the powers of domiciliary care agencies, even more of individual workers, are extremely limited. They are guests in the service users’ homes, engaged on contracts to undertake specific tasks, often within tight time limits. Nevertheless, they probably see more than anyone except family members undertaking day-to-day care of the ways in which older people can be undermined and, to put it frankly, robbed. The position of trust in which care workers are often held gives them a vital stepping off point for helping to detect, or better still, prevent abuse from taking place.

The task, as Hugh Constant, Practice Development Manager at SCIE succinctly expresses it, is “providing respectful, individualised care, that recognises the value and humanity of each and every person being supported”. We are never going to abolish elder abuse completely, and financial and material abuse are among the most intractable of problems, but with determination, domiciliary care can play a significant part in minimising this despicable scourge on our society.

What you can do now

Domiciliary care staff can do the following to prevent financial abuse of service users.

Get expert Care-inform updates for free