Exposure to diesel engine exhaust emissions (DEEEs) is an increasing workplace health and safety issue. Gordon Tranter describes the health effects of exposure to DEEEs and the steps that should be taken to reduce the risks from exposure. 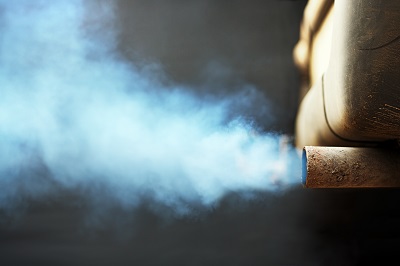 It is the fine particulate matter (PM) in DEEEs that has the greatest effect on human health. PM consists of inhalable and respirable particles from a variety of components including sulphate, nitrates, ammonia, sodium chloride, carbon particles, mineral dust and water. PM with a diameter of less than 10 microns (PM10), is capable of penetrating peoples’ lungs and entering the bloodstream, causing adverse health effects. A growing body of research has pointed towards the smaller particles, in particular PM less than 2.5 microns (PM2.5), as being more closely associated with adverse health effects than PM10. PM2.5 is mainly particles of elemental carbon caused by incomplete combustion of fuel, with many hazardous substances, including aldehydes, nitrogen oxides, sulphur oxides and PAHs from the combustion process absorbed onto the particles.

The composition of the DEEE can vary with the fuel type or rate of consumption, speed of engine operation, the type of engine and what it is used for.

Who is exposed to diesel emissions?

Exhaust emissions arising from the combustion of diesel fuel in compression ignition engines includes those from motor vehicles, trains and ships and generators. Anyone who works on or adjacent to these engines is exposed. People with some of the highest work exposures include truck drivers, toll booth workers, miners, forklift drivers, other heavy machinery operators, railway and dock workers, garage workers and mechanics. Some farm workers can also be affected.

DEEEs can cause irritation to the eyes or respiratory tract even after the exposure has ceased. These effects are generally short term. However, prolonged exposure to DEEEs can lead to coughing, chestiness and breathlessness. There are also observations supporting the hypothesis that diesel exhaust can exacerbate allergic inflammation and induce the development of allergic immune responses.

It is not known which elements of the complex mixture of gases, vapours, liquid aerosols and particulate substances are responsible for the adverse ill health effects.

There is also evidence that repeated exposure to diesel fumes increases the risk of lung cancer. In June 2012 the International Agency for Research into Cancer (IARC) considered the evidence for the link with lung cancer and as a result classified exhaust emissions arising from the combustion of diesel fuel in compression ignition engines (DEEEs) as a Group 1 Carcinogen — carcinogenic to humans.

As a substance hazardous to health, DEEEs are subject to the general provisions of the Control of Substances Hazardous to Health Regulations 2002 (COSHH). COSHH requires employers to ensure that the exposure of their employees to substances hazardous to health is either prevented or, where this is not reasonably practicable, adequately controlled. This involves carrying out a suitable risk assessment of the risks of exposure and taking steps to prevent or limit those risks.

Directive (EU) 2019/130 has amended Directive 2004/37/EC on the protection of workers from the risks related to exposure to carcinogens or mutagens at work (the Carcinogens Directive). The amendments include the addition of diesel engine exhaust emissions to the carcinogenic substances, mixtures and processes listed in Annex I to Directive 2004/37/EC. The directive came into force on 20 February 2019 and has to be transposed into UK legislation by 21 February 2021 at the latest.

The directive introduces a new exposure limit for DEEEs: 0.05mg/m3 eight-hour time-weighted average measured as elemental carbon. This new limit will have to implemented by 21 February 2023, although underground mining and tunnel construction have a longer deadline of 21 February 2026.

The Health and Safety Executive (HSE) recommends in INDG286 Diesel Engine Exhaust Emissions that employers make a suitable and sufficient assessment of the risks to health where there is a risk of exposure to DEEEs. This should be used to identify the necessary steps to prevent or adequately control the exposure.

Where possible the emission of DEEEs should be prevented or reduced. Advances in diesel engine technology, including application of filters, can be used to reduce particulate matter emissions, and catalytic converters to reduce gaseous emissions. These techniques have significantly reduced emissions from diesel engines used in transport.

Indoor workplaces where DEEEs are generated, such as garages, should be kept well ventilated, eg by air extraction fans or by installing air vents in the walls and ceiling. Exhaust gas scavenger systems can be connected to the vehicle tailpipe when static running, particularly when working in a vehicle inspection pit. Any such engineering controls used should be properly maintained and checked regularly.

More general control measures should also be considered, such as:

Employees likely to be exposed to DEEEs should have:

The HSE publication HSG187 Control of Diesel Engine Exhaust Emissions in the Workplace includes advice on controlling exposure to DEEEs in the following specific situations:

To preventing harm to health, employers must first determine if a worker is exposed to hazardous levels of DEEEs. This can only be done through personal exposure monitoring.

DEEEs are complex mixtures of variable composition. There are several components of DEEEs such as nitrogen dioxide and sulphur dioxide which have WELs and could be measured. However, determining the elemental carbon concentration is considered the most appropriate monitoring method, eg by using a cyclone sampler with quartz filter and subsequent analysis for respirable carbon. Although EH40/2005 Workplace Exposure Limits does not contain a WEL for elemental carbon, SOCOTEC, the provider of testing, inspection and compliance services, recommends an exposure limit of 0.1 mg/m3 for elemental carbon. This is in contrast to the 0.05 mg/m3 required by the amendment to the Carcinogens Directive. See also the Occupational Exposure Limits topic.

COSHH requires that if there is a reasonable likelihood that a disease or effect may occur under the particular conditions of the work and there are valid techniques for detecting indications of the disease or effect, employers should ensure that such employees are under suitable health surveillance. See the Health Surveillance topic.