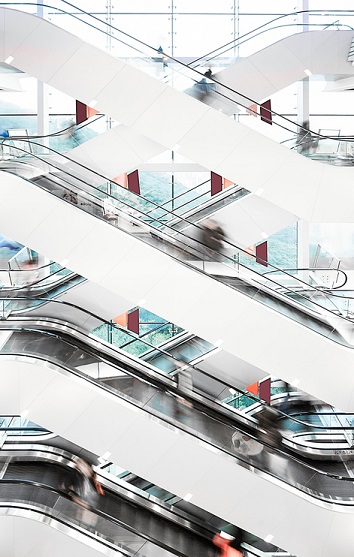 Escalators can be found in many locations from modern office accommodation to public access buildings such as railway stations and large department stores.

As the Lift and Escalator Industry Association (LEIA) states, “they are among the very few modes of transport available for continuous unsupervised use by all persons, potentially ranging from the very young to the elderly and infirm”.

Although serious accidents involving escalators are a rarity based upon the number of persons using them, accidents can and do occur. A number of recent well-reported incidents that have resulted in fatalities and serious injuries highlight the need for escalator safety to be carefully considered.

Causation and duty of care

According to guidance produced by the Health and Safety Executive (HSE) and the Safety Assessment Federation (SAFed), “escalators and moving walkways are a relatively safe way of transporting people” but there are hazards associated with the equipment as well as hazards “that users may bring with them”.

The main hazards associated with the escalator equipment will be in relation to the potential for entrapment, for example through failure of deflectors/combs, or slips and trips due to, for example, sudden stopping or contamination of the treads.

Research undertaken by the Construction Industry Research and Information Association (CIRIA) into accidents involving escalators in railway settings found that falls were the most common occurrence with the loss of balance, missing of footing and ill health being cited as causes.

The same research also found that “dealing with objects” such as luggage were a cause of a third of all accidents while intoxication accounted for a fifth. Certainly human behaviour can be seen as a significant causation with CIRIA guidance citing behaviours such as horseplay, inattention and losing control of objects as causation factors.

It is also recognised that a disproportionate number of accidents involve those over the age of 65 and that using escalators as “stairs” rather than standing while travelling can be a contributory factor. This is compounded by the fact that escalators are becoming “more prevalent, more complex, longer, higher and with increasingly exposed voids”.

Under the common law duty of care and statutory legislation including the Health and Safety at Work, etc Act 1974 and the Provision and Use of Work Equipment Regulations 1998, those with responsibilities for the safe use and maintenance of escalators must do all that is reasonably practicable to prevent accidents.

Of note, CIRIA suggests that although those with responsibility have little opportunity to influence user behaviours, “assessment of safety must take them into account” (where foreseeable) and action taken to mitigate them so far as is practicable.

Clearly for new escalator installations, thought should be given at the design stage to prevent/mitigate any foreseeable risks to as low as practicable by taking into account the factors identified in the HSE/SAFed guidance and designing escalators to standards such as BS EN 115 and the relevant European legislation. In addition, Regulation 19 of the Workplace (Health, Safety and Welfare) Regulations 1992 requires that escalators and moving walkways function safely, are equipped with any necessary safety devices and are fitted with at least one easily identifiable and readily accessible emergency stop control.

For existing installations, a suitable and sufficient risk assessment should be completed to determine what measures can be taken to reduce the potential for incidents to occur.

Physical measures can be considered such as the installation of additional rails or guards to prevent falls into voids that could be present and the fitting of deflectors to prevent entrapments.

As detailed above, persons carrying objects such as shopping carts, prams or trolleys onto an escalator are a major causation factor. Thought can be given to the use of physical barriers that prevent such items being taken onto the escalator (but that do not impede the point of entry areas). If considering this, alternative means of transportation in the form of a lift should be close-by for those with such items.

Boarding and disembarking areas should be kept clear of obstructions as these can create congestion while thought can also be given to the actual speed of the escalator, particularly where elderly users are foreseeable.

Other simple measures that may be taken include the marking of treads to demarcate leading edges but also to assist in transition from the landing to escalator, and to indicate the potential entrapment hazards.

To prevent misuse, those with responsibility may consider the installation of closed-circuit television (CCTV) to act as a deterrent for behavioural misuse. Good ambient lighting will also support the use of CCTV and will also improve demarcation between treads.

Physical measures should be supported by softer measures, particularly in the form of appropriate signage. Signs should be posted in a conspicuous manner at the upper and lower approaches to the escalator giving warning of the most significant hazards/rules of use (eg small children must be held firmly).

However, too much signage (and advertising) in the wrong location can negate the impact of signage and also create a risk by taking users’ attention away when boarding/disembarking the escalator. Safety signs can also be enhanced through the use of audible warnings when approaching the boarding and disembarking zones.

Clearly continual supervision of escalators is not likely to be reasonably practicable but staff members who may have a presence near to escalators (such as security operatives for example) should be trained to recognise potential hazardous situations and warn users of the risks.

Finally, the dutyholder will need to ensure appropriate procedures are developed in the event of an incident occurring and that relevant numbers of staff members are trained in these procedures, again such as security operatives.

Guidance from the HSE/SAFed states that dutyholders “should carry out simple visual checks periodically during the day and at start up to confirm continued safe operation” and also “consider a programme of cleaning which includes immediate action, routine and deep cleaning”.

The visual checks recommended include those of pallet/step, balustrades, handrails, skirting and landing areas, in order to identify obvious damage, build-up of debris and other hazards. Any staff members nominated to undertake this task should be properly trained.

Routine cleaning aims to ensure that all surfaces including balustrades, handrails, panels, step or pallet or landing treads are free from debris, litter or spills which may increase the fire, slip, trip or breakdown risk of the escalator. Cleaning should take place after the equipment has been taken out of use at a frequency defined by the risk assessment.

In addition, there should be a robust regime of maintenance in place. There are no specific legal requirements for examination or testing of escalators although requirements in the Provision and Use of Work Equipment Regulations do apply. It is for the dutyholder to devise a suitable maintenance schedule based upon requirements in regulation 5 (maintenance) and regulation 6 (inspection).

Any inspection and maintenance regime should aim to meet the relevant legislative requirements and also protect the asset to ensure its life-cycle estimation is maintained.

Both the HSE/SAFed guidance and the LEIA guidance emphasise the need for competency when maintaining escalators due to “the complexity of modern systems and dangers in the environment”.

The LEIA in particular suggests that a basic constituent of a maintenance agreement is an agreed number of planned maintenance visits, which “should be defined following the initial survey of the equipment and an assessment of maintenance requirements”. LEIA guidance contains useful information as to what such a regime should include.

It is worth noting that frequency of maintenance determination differs slightly from the HSE/SAFed approach that recommends a six-monthly thorough examination or to periods determined by a competent person.