In the chaotic world of environmental media, 2017 has been full of surprises — some good news, some bad and some very scary. In this review, John Barwise looks at some of the highs and lows, and the somewhat bizarre events that have hit the headlines this year. 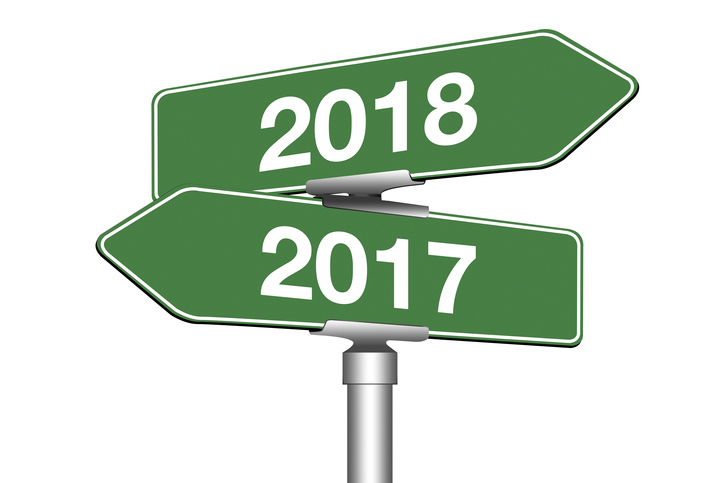 There’s no getting away from it, 2017 has been dominated by Brexit and President Trump. But while the Irish border, immigration and Trump’s Twitter page have grabbed most of the media’s attention, environmental headliners on the clean growth strategy, circular economy, renewable energy, climate change, electric vehicles and battery storage are likely to play a much bigger role in the future of the UK’s economy, long after the politicians leave the stage.

Brexit — a rollercoaster of ups and downs that started the year with a declaration from the Prime Minister saying: “no deal is better than a bad deal” and ended this month with a compromise that suggests “any deal will do”.

After months of negotiations, both sides agree that sufficient progress has been made to allow negotiations to begin on the all-important trade deal. The “cliff edge” that businesses were so concerned about has been avoided — for now. Adam Marshall, Director General of the British Chambers of Commerce, welcomed the news. “Businesses will be breathing a sigh of relief that ‘sufficient progress’ has been achieved,” he said.

Under the terms agreed, the UK will have to abide by the EU acquis during the two-year post-Brexit implementation phase, including all environmental laws and regulations, which has been welcomed by industry and regulators.

Earlier this year, the House of Lords and the UK Environmental Law Association (UKELA) had raised concerns over government accountability for environmental laws after Brexit, arguing that the UK could face an environmental legislation vacuum if we leave the European Court of Justice.

Industry sectors and their trade bodies were also worried about trading rules such as CE markings that ensures products meet safety, quality and environmental laws, and said it wanted to keep a level playing field with other Member States.

The manufacturers’ organisation, EEF, said its members wanted to see existing EU-led environmental legislation fully transposed when Britain exits the EU. EEF’s head of environmental policy said: “A mass repeal would be costly and disruptive, and would seriously undermine investment — all bad news for business.”

In May, the Environmental Audit Committee (EAC) criticised the Government’s failure to clarify chemicals industry regulations, including REACH, which MPs argued created uncertainty for this £15 billion industry in a post-Brexit Britain. The International Emissions Trading Association (IETA) also urged the UK Government to stay in the EU Emissions Trading System (EU ETS) after Brexit.

The two-year transition will, at least, ensure regulatory stability and environmental protection and give UK industry sectors continued access to European markets and more time to adjust to whatever new trading arrangements are agreed.

The Christmas present for the Prime Minister and her government is that industry concerns over a hard Brexit and the risks to EU-UK trade will stay on the back burner, for the time being at least.

While Brexit has dominated news in the UK and Europe, the global headliner has to go to President Trump. True to his election promises, within hours of his inauguration in January, President Trump deleted all references to climate change and global warming from the official White House website.

This was the start of the “one hundred days” campaign, during which time the President fell out with most other world leaders, by promising to withdraw from the Paris Climate Change Agreement and to repeal the US Clean Power Plan.

Speaking to a packed audience in the White House Rose Garden the President said: “In order to fulfil my solemn duty to protect America and its citizens, the United States will withdraw from the Paris climate accord.”

The USA is the world’s second largest emitter of greenhouse gases (GHGs) after China, and the decision to pull out of the agreement was clearly a disappointment, but other world leaders remained defiant and committed to reducing carbon emissions.

India’s Prime Minister Narendra Modi said it would be a “morally criminal act” for the world not to do its part on climate change. Both the EU and China vowed to push forward with the Paris Agreement.

At the recent COP23 event in Germany, representatives from over 190 countries decided to forge ahead with the next stage of implementation of the Paris Agreement, without US support. Cassie Flynn, a global climate change advisor at the UN Development Programme, says these developments show that “the momentum around the Paris Agreement certainly continues”.

In a show of global solidarity, President Trump was not invited to follow-up talks on climate change investment, held in Paris in December. Hosting the One Planet Summit, French President Macron justified his decision not to invite President Trump, arguing that the USA had signed the Paris Agreement and then withdrawn from it, but added that he was optimistic that the USA would rejoin the Paris Agreement at some point.

Estimates from the Global Carbon Project (GCP) in November, suggest that global CO2 emissions from fossil fuels are set to rise by around 2% for 2017, following three years when emissions have flat-lined, due largely to emissions reductions in the USA and China. Despite the recent rise, researchers at GCP expect emissions to plateau or only grow slightly over the next few years.

And the good news

Plastic packaging has hit the headlines this year, for all the right reasons. Earlier the UN “declared war on ocean plastic” which it describes as “an unprecedented global campaign to eliminate major sources of marine litter including the excessive, wasteful usage of single-use plastic by the year 2022”.

Up to 80% of all litter in our oceans are made of plastic, and more than eight million tonnes of plastic end up in the oceans every year, wreaking havoc on marine wildlife, fisheries and tourism, and costing at least $8 billion in damage to marine ecosystems, according to the UN.

Announcing the UK’s sign up to the declaration, Environment Minister Thérèse Coffey said: “Countries around the world need to take urgent action to stop plastic entering our oceans and I am delighted that today’s UN agreement clearly demonstrates our shared commitment.”

Also on plastics, Environment Secretary Michael Gove confirmed new legislation to ban microbead plastics in a range of cosmetics, toothpaste and other personal care products. The proposed ban follows growing concern that the tiny plastic particles attract toxic substances which end up in rivers and seas, where they pollute fish and other marine life, with potentially harmful effects higher up the food chain.

Greenpeace, an unlikely government ally, was full of praise:​ “The UK Government has just proposed the strongest ban on microbeads in the world to date,” said oceans campaigner Louisa Casson.

And while we are talking about the Government’s well-earned environmental house points, let’s not forget the landmark Industry Strategy and its sister ship, the Clean Growth Strategy, announced by Business Secretary, Greg Clark.

There have also been lots of industry-led innovations as well, including the UK’s first solar farm and battery storage facility to be built and operated without government subsidies in eastern England.

Clayhill solar farm near Milton Keynes, is the UK’s first subsidy-free renewables site, following advances in renewables technology and significant falls in the cost of solar panels — down by two-thirds since 2010. Launching the project, Claire Perry, Minister for Climate Change and Industry described the subsidy-free project as “a significant moment for clean energy in the UK”.

A massive 2.5 billion single-use cups are thrown away in the UK each year but recycling has proved problematic because the card material is fused with a polyethylene liner to ensure the cups don’t leak. But James Cropper’s CupCycling facility uses innovative technology that can separate the paper and plastic components allowing both products to be recycled or “upcycled” and reused to make high-quality recycled paper.

Upcycling is a prime example of the circular economy model in action and there have been major strides at EU level to promote this now fashionable way of saving the world’s diminishing resources. Back in January, EU Environment Commissioner, Karmenu Vella, released a “mid-term” update on Europe’s Circular Economy Package and Action Plan which covers the full life cycle of products — from extraction to production, including materials consumption to waste management while supporting a market for secondary raw materials.

Back in March 2017, the Welsh Government announced a £6.5 million fund to improve recycling and make the transition to a circular economy. The Circular Economy Capital Investment Fund, which starts in 2019, will support small and medium-sized enterprises (SMEs) in their efforts to become more resource efficient and engage in an expanding Welsh circular economy.

Announcing the extra funding, Welsh Cabinet Secretary for Environment and Rural Affairs, Lesley Griffiths, said: “We will continue to advocate the widespread adoption of a circular economy among businesses and our European partners as we aim towards the ambitious targets we have set ourselves in ‘Towards Zero Waste’.”

And, what about the really bizarre?

This is a story of handbrakes and tin openers used to decommission nuclear reactors. Most people are wary of decommissioning old nuclear power stations contaminated by radioactive debris. There are a plethora of safety manuals and government agencies available to ensure hazardous radioactive waste poses no risk to workers and the public.

So, it was a bit of a shock to read this eye-opening government press release headliner, “The handbrake from a vintage 1968 Ford Cortina has been used in a piece of kit to help decommission a reactor at Dounreay.”

It turns out engineers used the wheels from a kitchen can opener, attached to the handbrake of an old “decommissioned” Ford Cortina, to help steer a camera inside the reactor to survey the redundant and highly radioactive plant. Blu-tack and Cillit Bang (used to clean kitchen drains) and other novel items have also been used.

Earlier this year, Scotland’s Environment Minister, Roseanna Cunningham MSP, wrote to the UK Government seeking assurances over the clean-up of the site. “It is vital that there is continued momentum in the safe and effective clean-up at Dounreay,” she said.

And finally … spare a thought for Santa this Christmas

In a renewed drive to reduce packaging waste, questions are being asked about whether Santa should register as an obligated packaging producer. It’s a fair question, given that he will deliver a bundle of presents to around 400 million children this year, that’s thousands of tonnes of excess packaging that has to be accounted for.

There’s also the question of whether Santa should be declaring emissions under the EU ETS — methane (reindeer gas) is excellent for jet-propelled sledges, but it’s a more potent GHG than even CO2. And, according to some estimates, Santa has to travel millions of miles at 3000 times the speed of sound (which is why we don’t see him) generating an estimated 13 gigatonnes of CO2 equivalent. More technology needed here.

So, what can we expect next year … more Brexit stories and Trump tweeting, for sure. But there’s also more to come on the Industry and Clean Growth Strategy, growing concerns over climate change, and a groundswell of support for new innovations and technologies to lessen the burden on the Earth’s natural resources. Expect more too on the Government’s drive to build its natural capital programme, with a lot more emphasis on environmental impact assessments, pollution control and improvements on energy management.

All these stories, and more will be covered and analysed as they happen, on Croner-i — so stay tuned.