On 21 August 2020, Hove Crown Court gave judgement in the case of Environment Agency v Plumpton Agricultural College. The College was prosecuted for causing slurry to pollute a stream. 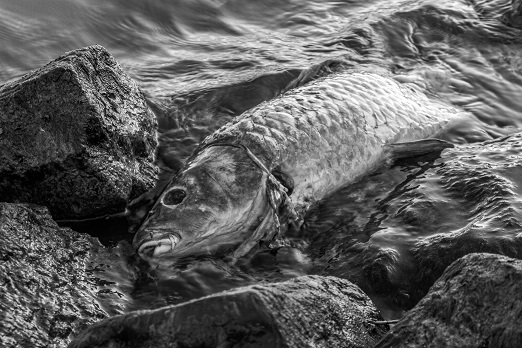 The Environment Agency prosecuted Plumpton Agricultural College for causing the deaths of more than 1500 fish, after management failings caused slurry to significantly pollute a nearby stream.

Hove Crown Court heard on 29 and 30 November 2016, contaminated water containing a high amount of cow slurry was spread as fertiliser onto a field known as 15 Acres, at Wales Farm, now known as Lambert Farm, managed by Plumpton College.

This work was carried out by head herdsman Stuart Duncan, despite the volume spread being many times more than the field could absorb. As the ground was also frozen, much of the contaminated water ran off into ditches and land drains, which then flowed into the nearby Plumpton Mill Stream.

The pollution was classified as a Category 1 incident by the Environment Agency — its most serious level. The stream smelled strongly of slurry, and the watercourse was visibly brown with foam on the top. Many of the dead fish were protected species, such as migratory trout.

The Environment Agency became aware of the incident after it was reported by a member of the public. The college did not report the pollution had occurred, and nor did it have an emergency plan in place for dealing with slurry spillage.

The agency had been in regular contact to advise the college on its management and operations on a number of occasions since 2011, because of concerns about incidents and non-compliances with agricultural regulations.

The college admitted the incident was the result of a mistake by a member of staff. They admitted that the actions taken to spread the slurry were wrong, as the weather conditions and field were not suitable for this to take place.

Prior to sentencing, Duncan accepted a formal caution for his actions contributing to the incident.

Judge Shani Barnes said the Environment Agency had worked tirelessly to bring the college into regulatory compliance over the past few years.

Plumpton College is reported to have commented that the judge’s finding supported its own investigation that the incident was attributable to an inexplicable course of behaviour by an ex-member of staff who left the college in 2017. The Crown Court Judge had supported the College’s view that the incident was not indicative in anyway of its current performance and standards, and had indeed praised the significant progress made over recent years.

Animal manure is a key source of ammonia, a pollutant which, combined with other chemicals in the air, forms fine particles that can lodge deep in the lungs, harming human health.

Ammonia emissions, more than four fifths of which come from agriculture, are reported to be increasing. Ways of reducing them on farms require changes to widespread practices: instead of spraying fields with slurry — a method known as “splash plate”. Farmers can use more modern methods that create less diffusion, targeting manure to the areas where it is needed.

Slurry can be distributed into narrow, evenly spaced rows or injected into the soil, where its fertilising impact is most effective and its exposure to the air much less.

An Environment Agency spokesperson is reported to have commented that from 2025, farmers would be required to spread slurry and digestate using only low emission spreading equipment, such as trailing shoe, trailing hose or injection. Spreading of organic manure, such as slurry, provides crop nutrients and can replace the use of inorganic fertilisers. Use of slurry in this way is a good example of resources being used efficiently, provided best practice is used.

Professor Mark Sutton, an environmental physicist at the Centre for Ecology and Hydrology, said slurry spraying in its current form probably should be banned.

Farmers have been promised support by the Government to help them change their practices, and if necessary their equipment, but it is not clear how much money they might receive. Proposed legislation includes a system of environmental land management contracts that are set out to accommodate ammonia reduction as one of the public goods for which farmers will receive public money and that will replace current EU subsidies.

The National Farmers’ Union said that farmers would need considerable financial support to make the changes needed and would struggle to meet the government’s proposed timetable. Guy Smith, the NFU deputy president, said more detail was needed on how intensive farms, which will fall under stricter rules, should be defined. He also challenged ministers to explain how the proposed changes could be put in place without raising costs.

A spokesperson for the Soil Association is reported to have commented that intensive livestock production methods should be a key focus because emission rates increase at higher densities. All forms of farming, if poorly managed, could give rise to ammonia pollution. They stressed the importance of better storage of animal manures, as well as better methods of using slurry on the soil, adding, using trees to capture emissions and provide more effective ventilation systems for livestock housing could also help.

“Ammonia can be very harmful to the lungs, particularly for those already vulnerable, and can also have a detrimental impact on biodiversity as wildlife is also affected. We recognise that changes in farming practice are necessary and this will involve both government regulation and support,” they concluded.