A vibrant, growing market located at the crossroads of three continents, Turkey is increasingly receptive to upping its business links with post-Brexit Britain. 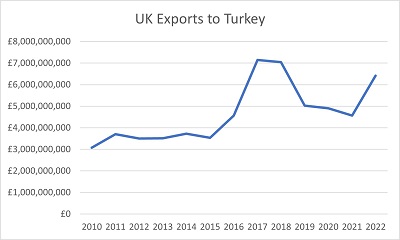 For centuries, Turkey has been a major international crossroads and transit hub for trade between east and west. The country occupies a strategic position straddling Europe and Asia, Africa and the Middle East and, for this reason alone, has high strategic value on all sides. That includes the UK, a big commercial ally, with strong historical links spanning multiple industry sectors, including defence — both nations are members of the NATO alliance.

But Turkey, with a population of 83 million, is much more than a gateway to somewhere else, with a rich, historical tradition and culture of its own. It was once the heart of the powerful Ottoman Empire, which controlled much of south-eastern Europe, northern Africa and western Asia from around the 14th century to the early 20th century.

The modern-day republic was founded in the 1920s by Kemal Ataturk, a nationalist leader who died in 1938, but who remains a revered figure in the present era. A predominantly Muslim country, Turkey is founded as a secular state, based around democracy and a free market economy, with its capital in Ankara — although some of its values have been put to the test severely at times.

About a fifth of Turkey’s population is made up of Kurds and there remains a strong Kurdish separatist movement in the south-east of the country, bordering into Iraq and Iran. Separatist groups have accused the Turkish state of seeking to erase their cultural identity, with guerrilla wars flaring up since the 1980s.

These have intensified at times, alongside the region’s shifting political dynamics, during recent conflicts in the wider area both in Iraq, and over Syria in its civil war, and in the battle with ISIS and its attempts to establish an Islamic state. It is a delicate balancing act for long-serving Turkish leader Recep Tayyip Erdogan, in power as prime minister since 2003, and then elected as president in 2014.

While supporters say their premier has brought Turkey years of growth and stability in such a volatile setting — economic growth had been rising steadily for over a decade — critics see Erdogan as an autocratic leader ready to crush any sign of dissent.

Against this uneven backdrop, Turkey has made strong headway in opening up and growing its economy to the rest of the world.

It’s long-held aspiration to the join the European Union (EU) remains on hold, however, in part, because of complications linked to its unique set of domestic challenges, including misgivings about its human rights record. And yet, the EU relies on Turkey to prevent potentially millions of Syrian, Iraqi and other refugees crossing into its territory — offering billions of euros in aid to help it host the migrants.

Turkey is also a bitter rival to neighbouring Greece, an EU member state — the two have even come to blows over issues including the Turkish occupation of northern Cyprus. The discovery of offshore oil and gas deposits in Cyprus and the wider eastern Mediterranean region has further fanned the flames in recent years. It led to a collision this year between Greek and Turkish warships as they tracked a survey vessel sent by Ankara to explore for more oil in the area, a move Athens deemed illegal.

Turkey — which is still conducting its own exploration work in the eastern Mediterranean — also recently unveiled a significant gas find of its own in the Black Sea, which could help to cut its high dependence on energy imports. Despite this, there is recognition on all sides of Turkey’s huge geopolitical significance, given its unique location.

While its NATO membership is intact, Turkey is being courted by other powers, choosing to purchase Russian anti-aircraft missile systems in a controversial move last year, much to the annoyance of US defence chiefs. Washington has already retaliated by suspending Turkey from its latest stealth fighter programme and may issue further sanctions if the missile systems are deployed on the ground.

Turkey’s relations with China are also on the ascendancy, based on rising trade and investment and growing bilateral cooperation. In a sign of the times, the Turkish central bank said in June that it had used Chinese yuan funding for the first time to allow local companies to pay their import bills from China — the move is expected to further strengthen and speed up trade and economic links between the two sides.

For the UK, faced with its own transition period in the post-Brexit era, Turkey is seen as a high-priority market with great potential for expanded trade in a whole host of areas ranging from energy and infrastructure through to technology and aerospace.

Despite the devastating economic impacts of the coronavirus pandemic and the decision to lockdown people and businesses, there are collaboration opportunities across a wide range of other areas too. The Turkish government is currently investing in large infrastructure projects from nuclear power to road and rail and is keen to nurture emerging industries such as advanced manufacturing and life sciences.

There are strong commercial ties already and English is increasingly used for business, while British exporters can leverage support via the embassy in Ankara, and further diplomatic outposts in Istanbul and Izmir, as well as from UK Export Finance (UKEF). Last year, UKEF supported a US$500 million deal for Airbus Defence and Space Ltd UK to manufacture and supply two telecom satellites and a ground station for Turksat, a Turkish communications operator.

Meanwhile negotiations for a post-Brexit free trade pact continue, which could consolidate this relationship further. Senior officials in Ankara have indicated that a deal with the UK is “very close”, with just technical details to be ironed out, according to Foreign Minister Mevlut Cavusoglu.

Export levels are already very healthy, with two-way trade reaching £18.8 billion (US$25 billion) in 2019, according to data from the Office for National Statistics (ONS). Turkish imports into the UK are slightly ahead, at £10.9 billion (US$14 billion), according to the ONS, with British exports standing at £7.9 billion (US$10 billion). This is predominantly made up of industrial products — Turkey is keen to gain more access to the UK market for key goods such as vehicles, white goods and clothing and textiles.

Both sides are facing up to economic contractions however. Turkey’s economy is expected to shrink 4% overall this year, according to a survey of economists by information group Bloomberg.

As such, business interest remains high with both the UK and Turkey looking to international markets to stimulate growth in 2021 and beyond. Turkey’s Ministry of Industry and Technology announced in July that it had set a new record in the issuing of investment incentive permits to companies for new projects.

Among 1,200 new investment projects, more than half were in the manufacturing sector, followed by 21% in energy, and the remainder in services, agriculture or mining. Industry Minister Mustafa Varank said the investment appetite for the first seven months of 2020 was up by 28% in comparison to the same period the previous year — a welcome piece of good news in an otherwise difficult period.

He added that the government had introduced new state incentives, with regional incentives to be rolled out to local districts to “encourage more investments throughout our country.” Indeed, according to President Erdogan himself, Turkey’s legion of large and small exporters will also help to fuel the nation’s economic revival.

“During the pandemic, many Turkish companies gained access to countries and regions where they had no or a very limited market share,” he told a recent investment forum.

“We see that our export-oriented companies have further expanded their customer base. As the effects of the pandemic wane across the world…the momentum Turkey has gained will grow stronger.”

This entrepreneurial spirit will be needed to breathe fresh life back into the nation’s beleaguered tourism sector, an important source of foreign exchange income. The government will be looking to revive its strategic tourism sector as soon as possible after a dismal 2020 — but so too will holidaymakers familiar with Turkey’s endless charms.

Britons travel in numbers for package tours to the sun-drenched resorts of the south, to exotic city breaks in Istanbul, as well as to experience the hospitality of the locals and a world-renowned Turkish cuisine. Turkey’s diverse landscape, from beaches and mountains, to the olive groves and ancient ruins of the Ottoman era, will have been missed. It seems that the time is right for the UK and Turkey to get together once more.