South-east Asia’s second-largest economy and perhaps its friendliest — known to the world as the “land of smiles” — Thailand is a developing country that has long welcomed British businesses. 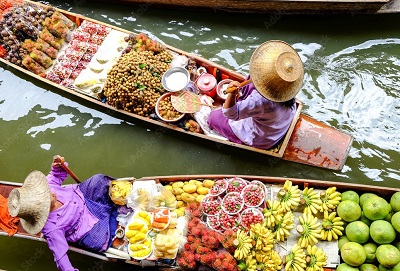 An exotic market, and one of south-east Asia’s original tiger economies, Thailand is a place familiar to so many British tourists already. The tourism industry was — and still is — a major pillar of its developing economy, at least until Covid-19 shutdowns brought air traffic to an abrupt halt.

While arrival numbers are slowly beginning to recover, Thailand still retains every bit of its magic and charm as a unique holiday destination and long-haul adventure.

A friendly, Buddhist nation, blessed with some of the world’s finest beaches and paradise islands, and with a rich and unique history, it’s not hard to see why thousands make the 12-hour flight from London to Bangkok, the capital, each year.

The Thai landscape — which borders Malaysia in the south, and Myanmar, Laos and Cambodia, to the west, north and south — is adorned with everything from golden, incense-filled temples and thick rainforest, to modern-day shopping malls as well as vibrant traditional markets. They include the country’s famed floating markets where goods are bought and sold from boats, a tradition dating back to a time where water transport played an integral role in daily life. But there are similarities perhaps with the UK in other ways too, beyond the tourism connection.

With a population of 69 million, Thailand is a country of similar size, at least in terms of people numbers. Yet it is also a part of a much wider market, as a member of the Association of South-East Asian Nations (ASEAN), a group of 10 member states across the region, representing over 650 million people.

The two counties also share a common passion for football, largely centred around Leicester City Football Club, which has been owned by a Thai-led consortium since 2010, fronted by duty-free retailers the King Power Group, based in Bangkok. Indeed, it’s not hard to spot the Leicester City soccer shirts at the airport’s duty-free stores. Flagship London department store Selfridges was also acquired last year by a consortium led by the Thai conglomerate, Central Group, for a fee reportedly worth £4 billion (US$5 billion).

Thailand and the UK also share another key common thread in retaining their monarchy, which continues to shape society and politics even today. For the most part, however, Thailand is a country that has been steered by its military since the post-World War Two era, with just a few interludes of democratically elected government. It means that Thai politics can be fractious and divisive, with vocal protests on city streets not an uncommon sight.

In the defence sector, Thailand is also a key strategic ally to the UK in the Asia region. In March, the two sides conducted a big joint defence exercise, known as Panther Gold 21, reflecting this close bilateral security relationship.

The Thai economy in recent years

While Thailand’s economy has shown great dynamism in recent decades, it is still very much a developing country with living standards modest in comparison to the UK. The easing of Covid-19 curbs has helped to reboot tourism and exports, though any recovery appears fragile for now.

The government revised downwards its growth forecast range for 2022 to between 2.5% and 3.5%, citing a toxic mix of higher prices, a slowdown in China, as well as subdued global economic prospects linked to Russia’s invasion of Ukraine. Last year, its 1.5% growth in gross domestic product (GDP) during 2021 was among the lowest in Asia.

Notably, the all-important tourism sector is still lagging far behind its former glory. The National Economic and Social Development Council (NESDC) expects to see seven million foreign tourist arrivals during 2022, up marginally from the year before, but massively below the 40 million arrivals in 2019, before the pandemic.

Higher export growth projections are more promising, however. Key exports include manufactured goods, such as electronics, vehicles, machinery and other equipment, as well as foodstuffs and agricultural goods, mainly rice and rubber. Total fruit exports increased 48% in value in 2021 to some US$6.2 billion, making Thailand the world's seventh largest fruit exporter, according to Global Trade Atlas data.

Its products include jackfruit and coconut water, which have both been keenly adopted by vegan and other health-conscious consumers in the UK and elsewhere. As well as fresh fruits, Thailand also exports worldwide canned fruits, frozen fruits, ice creams, dried fruits, and drinks, such as pineapple, mango, guava, and orange juice. It was the eighth largest global exporter of fruit juice in 2021, with exports worth US$630 million, up 13% on the year before.

Thailand is also rich in natural resources such as tin, gypsum, and cement, and continues to unearth new oil and gas deposits, although it is increasingly focusing its attentions on higher value niches, including new digital and advanced technology areas.

Its natural resources wealth — including its rich tourism potential — forms the basis for a strong bilateral trade relationship with the UK that is worth almost £5 billion (US$6.26 billion) a year.

More than 5000 British businesses are now estimated to be exporting to Thailand. Total UK exports amounted to £2 billion (US$2.5 billion) for the four quarters to the end of Q4 2021 — representing a slight decrease of 2.3% compared to the same period in 2020. The main British exports included miscellaneous electrical goods, cars, pulp and waste paper, metal ores and scrap and general industrial machinery.

In the other direction, total UK imports from Thailand amounted to £2.8 billion (US$3.5 billion) during 2021. Together, it ranks Thailand as the UK’s 40th largest trading partner worldwide overall.

During 2020, foreign direct investment (FDI) from the UK into Thailand was also worth £3.2 billion (US$4 billion), underlining a strong and deep long-term business relationship. Established projects include Siam Biosciences, which became the regional production plant for AstraZeneca’s ground-breaking Covid vaccine.

Other major UK companies with a presence in the country include the likes of financial services group HSBC, law firm Watson, Farley & Williams, and oil giant Shell. Indeed, one of the early pioneers of Thailand’s nascent offshore energy industry was UK-listed Coastal Energy, although it was subsequently taken over by Spanish energy group Cepsa.

All are supported by an established network including several direct flights per day from London to Bangkok, as well an active British Chamber of Commerce Thailand. It is the largest non-Asian foreign business chamber in the country and the largest and oldest British Chamber in the whole of Asia, reflecting Thailand’s long-term significance to the UK.

Both sides are also engaged in dialogue to expand free trade via a Joint Economic and Trade Committee (JETCO), established in 2021 — the UK’s first new JETCO in 10 years.

In a bid to boost FDI, Thailand also laid out plans in 2015 to establish 10 special economic zones (SEZs) located throughout the country. These offer a range of incentives and are targeting a number of key sectors, from manufacturing and logistics through to tourism promotion services.

It’s a strategy that is paying off, with the Thailand Board of Investment (BOI) announcing that the combined value of foreign and local applications for investment promotion in 2021 totalled US$19.5 billion, an increase of 59% on the previous period.

Japan was the single largest foreign investor, followed by China, and then Singapore. Much of this investment was centred in and around the Eastern Economic Corridor (EEC), Thailand’s prime industrial area, comprising Chonburi, Chachoengsao, and Rayong.

Climate-related investments, green tech and the environment are also becoming more visible in the general pattern of trade and investment. The BOI reports that FDI is up in the tech sectors, with a rise in the value and number of projects in bio-circular-green (BCG) industries, as well as the ongoing build up of the power generation sector, which includes both renewable energy and traditional energy.

Indeed, energy and infrastructure are among two notable overlap areas with the UK. During a UK ministerial visit early on in 2022, infrastructure financing by the new British International Investment group was offered in support of Thailand’s economic drive.

Other new areas eligible for incentives from the BOI include a digital trading platform for agricultural products as well as agri-food industrial parks. New infrastructure for electric vehicles in also being put in place, with Shell, among others, looking to extend its highways network from Singapore through Malaysia, and soon expanding into Thailand.

To direct more British firms to these emerging tech-based opportunities, both sides formed a UK-Thailand Tech Export Academy during 2021 to bring together businesses from both sides, with expert guidance from top consultants like Deloitte, EY and KPMG.

The UK has also teamed up with Thailand’s Digital Economy and Promotion Agency (DEPA), which seeks to exploit new and emerging high-tech opportunities, including the evolution of smart cities.