With British investment on the rise in new industries ranging from data centres to renewable power, there is so much more to modern Spain than soccer and sangria. 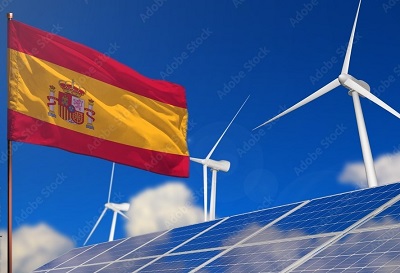 Home to around 47 million people, Spain is now the fourth largest economy in the European Union (EU), following the UK’s departure after Brexit, behind only Germany, France and Italy.

It also boasts a modern physical and communications infrastructure, plus a highly-skilled and talented workforce, where around 75 % of business activity is services-based.

As such, it provides a key gateway both into the EU and global markets in general, especially Spanish-speaking territories.

Its location, between Europe and Africa, also makes it a natural bridge into new emerging markets such as Morocco, and further to the south.

The country is strategically significant too, located at the crossroads of the Atlantic Ocean and the Mediterranean Sea, making it an important maritime transit point across multiple continents.

Indeed, this position helped propel Spain into one of the world’s early global powers, underpinned by its fearsome maritime strengths.

The country became a major colonial power in the 16th century, through exploration and conquest, maintaining a mighty overseas empire that spanned parts of Africa, Asia and the Americas until the 19th century.

At times, this also pitted Spain against other European empires, including Britain, a big rival in the plunder of far-flung exotic territory in centuries gone by.

This history has embedded a deep international footprint, with Spanish architecture and its language very much evident today across Latin America and other pockets of the world.

While Spanish is the main language, others, notably Catalan and its variant Valencian, Gallego (Galician) and Euskera (Basque) are also spoken.

Culturally, this is also a land that has left a unique footprint in the world too, through the likes of esteemed artists such as Pablo Picasso and Salvador Dali.

For most people in the UK, Spain is a country long associated with sunny holidays in the Med, following the emergence of the first package tours offering guaranteed sun, cheap food and drink and a fun, foreign adventure during the 1960s.

It prompted huge resort developments in destinations such as Benidorm and Torremolinos and fuelled the growth of the “timeshare” property boom.

While these holidays remain ever popular, the tourism market has matured greatly in the years since, with new, more sophisticated hotspots and greater diversity now on offer.

This ranges from city breaks in Barcelona and the capital Madrid, with their plush hotels and Michelin-starred restaurants, to the rugged mountains of the Sierra Nevada and other national parks, and the chic nightlife of Ibiza.

Indeed, tourism remains integral to the Spanish economy, attracting around 67 million visitors a year pre-pandemic, and accounting for around 12% of gross domestic product (GDP).

This is especially so for the main Spanish islands, from the Canary Islands (Tenerife, Lanzarote, Gran Canaria) off the north-west coast of Africa, to the Balearics (Mallorca, Menorca, Ibiza).

Spain and the UK share other passions too, notably for football, with top teams Real Madrid and Barcelona regularly competing with England’s finest in the UEFA Champions League.

One lingering sticking point in the bilateral relationship is the British overseas territory of Gibraltar, a small outcrop on the southern tip of the Iberian peninsula.

A self-governing area, with Gibraltarians holding British citizenship, it is a strategically-important base for the British armed forces with a permanent garrison and naval base, occupying a commanding position at the western gateway to the Mediterranean.

While Britain has ruled Gibraltar since 1713, Spain continues to claim sovereignty to the territory, with the EU urging both sides to find a solution to the issue.

On the other side of the Mediterranean, Spain’s overseas territories also still include the tiny enclaves of Ceuta and Melilla on the northern shores of Morocco’s coast — the only piece of European territory on mainland Africa.

It also holds four other smaller territories in the Mediterranean, in the narrow strait of Gibraltar.

All are contested by Morocco, despite being held by Spain for hundreds of years.

These areas have gained increased political significance in recent times with the influx of migrants from Africa into Europe.

Like other big European economies, Spain is looking to bounce back from the economic shutdowns imposed amid the Covid-19 crisis, but is similarly facing up to high inflation, which is expected to peg back growth.

The Bank of Spain has revised down its GDP growth expectations to 4.5% for 2022, from an earlier estimate of 5.4% last December, because of macro challenges facing the nation and the EU generally.

Growth forecasts for 2023 have also been trimmed down to 2.9%, down from a previously predicted 3.9%.

The Bank has said that it does not expect Spain to reach pre-pandemic output levels before the third quarter of 2023 at the earliest.

As ever, much hope will rest on the tourism sector making a strong recovery — although there is a long way to get back to normal.

Foreign tourist numbers fell by over 80% in 2020, while visitors in the first half of 2021 were at their lowest levels since records began.

Despite this challenging economic backdrop, the potential for ongoing trade and investment with the UK remains significant.

Spain is the UK’s eighth largest export market overall, while British companies are the fifth largest foreign investors — bilateral trade is now estimated at about £40 billion (US$52 billion).

More than 700 British firms now have interests in the market including well-known players, like Vodafone, Savills and GSK.

They are supported by a thriving British Chamber of Commerce in Spain and other advisory groups, including Invest in Spain (ICEX), the national investment promotion agency.

In the other direction, major Spanish companies such as Santander, Ferrovial and Iberdrola all have sizeable operations in the UK.

Spain’s familiarity means it can be a comparatively easy market for new British exporters, as well as one that is easy to access, with dozens of short flights each way, every day.

There is also a strong acceptance and appreciation of the quality of UK goods and services and leading brands, from fashion to finance.

This bilateral business is evolving with the times as well, with both sides exploring new and innovative areas of co-operation, such as renewable energy, climate finance and technology.

British renewable energy producer Ventient Energy recently announced the acquisition of a package of assets in Castile-León, in northern Spain, with a total capacity of 443 megawatts (MW).

A specialist in wind power, the acquisition brings with it a large chunk of new production from hybrid solar PV sources, an area poised to see strong growth according to experts.

It will complement Ventient’s existing Iberian wind and hybrid solar growth, paving the way to a business of 790 MW in Spain, and over 2 gigawatts (GW) across the Iberian peninsula overall.

Ventient Energy’s chief executive, Mark Jones, said it underscores the group’s “major commitment” to the Spanish energy sector and the communities it works within.

“Together with our current wind farms, we are already broadening our business through creating state-of-the-art hybrid plants,” he commented. “These will provide the most efficient energy generation from each site. In time, we expect evolve our business still further.”

According to Fitch Solutions Macro Research, Spain will be one of the most attractive destinations for investors in solar power in the decade ahead.

It expects to see an increasing number of private power purchasing agreements (PPA) deals in the industry — whereby companies obtain electricity directly from generators — which will help to drive growth in the next decade.

Other recent investments from the UK span a whole range of industry sectors, all highlighting the increasing sophistication of the Spanish market.

British funds and investment managers, Adequita Capital and ADVentures Partners, recently teamed up with Nethits Telecom, a Valencian company, to build what will be the largest data centre in the Valencia region with an investment of €241 million (US$262 million).

The infrastructure will provide computer security and data storage services to an audiovisual multinational and will create 1200 jobs during the construction phase.

The local Valencian government has shown strong commitment to attracting technology sector investments into the region.

Spain is made up of 17 regions, each with their own directly-elected authorities, although separatism remains a thorny and ongoing issue in wealthy Catalonia in the north-east.

While Spain may seem so familiar to sun-seeking Brits in the summer, there is still so much to discover for innovative and growth-hungry UK exporters and entrepreneurs.