The EU’s fastest-growing economy, Romania is starting to gain a wider recognition among the UK business community. 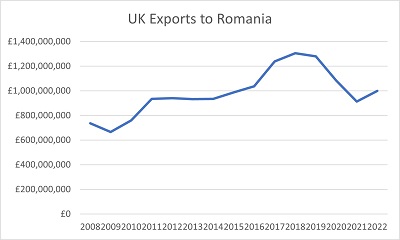 Romania on the rise

An Eastern European country of more than 21 million people, Romania is the largest of the Balkan states.

Bordered all around by a host of other countries, from Ukraine in the north to Bulgaria in the south, along the Danube, it also enjoys a stretch of coastline along the Black Sea.

Yet little is known about modern day Romania from a UK perspective, other than as a cheaper holiday alternative to Spain or Greece.

Thousands of British travellers make the trip each and every year to the country’s resorts and cities to soak up the sunshine and culture, and enjoy the lower cost of living.

In fact, group tour company On The Go Tours, reported last year that Romania is now the fastest-growing holiday destination for UK travellers.

It based its findings on data from the United Nations World Tourism Organisation 2018 Tourism Highlights Report, which found there was a 638 per cent increase in UK visitors to the country between 2007 — the year it joined the European Union (EU) — and 2017.

Incredibly cheap flights from the budget airlines in the UK, Ryanair and easyJet, have opened up a roster of new city breaks, from the capital, Bucharest, to other destinations such as to Cluj-Napoca, located in the north-west of the country. Other notable cities include Timisoara, Iasi, Constanta, Craiova and Brasov.

As well as its beaches and sunshine, Romania also boasts dramatic, unspoilt mountain scenery, plus a long history and deep-rooted culture, evident from the monasteries and medieval towns that populate the landscape.

That also includes the world-renowned Transylvania region, with its stunning castles and architecture, and famed of course for the Dracula legend.

This has fuelled huge investment in recent years, including the creation of Dracula-themed attractions that pull in thousands of visitors every year.

Throughout the region, spectacular castles populate the landscape, including Bran Castle itself, with its connections to Bram Stoker’s fictional count.

And yet little is known about the country in the UK mainstream consciousness since the breaking news that surrounded the fall of former Communist leader Nicolae Ceausescu on Christmas Day 1989, when images were beamed live to news stations around the globe.

The popular uprising was a turning point for a country that had fallen under communist rule in the aftermath of World War Two, resulting in an economy failing to keep pace with the western European nations.

Historically, Romania had also seen a number of other empires pass through, from the Roman and Ottoman, to the Austro-Hungarian.

The post-Ceausescu era has not been easy, however, with Romania undergoing a slower transition process than other former communist countries in the region, at least until recent times.

Before it eventually joined the EU, another defining moment was the decision to join the NATO defence alliance in 2004.

In the other direction, Romania’s big exports to the UK include machinery and electrical goods, textiles and garments, vehicles and transport equipment, furniture, agri-food products, plastics and rubber.

It also continues to benefit significantly from EU structural funds, which are directed at improvements in infrastructure development and other areas.

Romania still has one of the shortest motorway networks in the EU, with just 806 km of highways throughout the whole country — compared to just under 4,000 km in the UK, a country of comparable size, and over 14,000 km in Spain.

While the country still faces great challenges, its economy has been expanding at a rate significantly faster of late than in the western half of Europe.

The World Bank revised upwards its final growth estimation to 3.9 per cent for last year and expects this to come in at around 3.4 per cent during 2020.

Despite the drop in the past year or so, there are hopes that Romania can continue its positive forward momentum at a time when growth in the west remains largely anemic.

It also flagged its sectoral diversification and the “high quality of its human capital”, which attracts foreign companies with a long-standing commitment to the country.

But it warned against credit challenges arising from an expansionary fiscal policy stance.

This includes bold reforms to the pensions system.

With plans for a massive 40 per cent pensions increase, this will certainly test the government’s ability to keep a lid on its finances.

There are also concerns that the country might flout EU budget limits and risk potential credit rating downgrades.

The big hike in pension payouts has prompted another rating agency, Standard & Poor’s, to put Romania on ‘negative’ watch.

Romanian Finance Minister Florin Citu said in January that the state pension system needs a complete overhaul focused on contributions and private funds in order to be more sustainable.

Since 2009, and the aftermath of the global financial crisis, various governments have been able to reduce the budget deficit from 9.1 per cent of GDP in down to 3.6 per cent by 2017.

These improved finances, high growth rates and quality workforce have no doubt helped boost sentiment among the international investment community.

Foreign direct investment (FDI) has been rising year-on-year in recent times, with the total stock of FDI reaching US$94 billion at the end of the 2018, according to the UNCTAD World Investment Report 2019. That equates to about 39 per cent of GDP.

The number of new greenfield investments was also on the rise, with the manufacturing sector taking up a one third share of all FDI.

According to Santander Bank, Romania is still actively seeking to attract investment and has taken steps to strengthen its tax administration, improve transparency and create legal means to resolve contractual disputes quickly.

The oil and gas sector has long been a source of work for many UK-based firms, such as London-listed energy services specialist Petrofac.

While oil production has declined in recent years, the country is still a notable producer of both oil and gas and home to nine refineries, giving it one of the largest capacities in the region.

London AIM-listed Serinus Energy holds a 100 per cent interest in the Satu Mare concession, one of the largest exploration blocks in Romania, covering some 729,000 gross ares.

It includes the Moftinu gas field, discovered by Serinus in 2014, which was brought into production in April 2019.

Work in the area is still ongoing, with the drilling of the Moftinu — 1004 well, located approximately 900 metres east of the Moftinu gas plant, commencing at the start of 2020.

Romania also currently hosts Exxon Mobil, the largest listed oil corporation in the USA, which has a half share in the Neptun Deep offshore project in the Black Sea, alongside Austria’s OMV, although it is reportedly looking to sell up on the delayed project.

Much has changed in the UK’s overall relationship with Romania in the decade or more since it joined the EU.

That includes a strong, visible profile in the UK itself: three years ago, Romania overtook the Republic of Ireland and India to move from fourth to second most-common non-British nationality in the UK, according to the Office for National Statistics (ONS).

Although it joined the EU in 2007, it was only in 2014 that restrictions on Romanians’ rights to work in the UK were lifted.

Just two years later, the number of Romanians living in the UK had risen to 411,000, the ONS reported.

Polish remains the most common non-British nationality, with an estimated 1 million in the UK.

Slowly, this is eroding some of the hesitancy to explore the Romanian market among British firms.

One area that has drawn interest both from UK businesses and private investors is the real estate sector, driven by the comparatively cheap cost of property and land.

As well as individual households uprooting to Romania to acquire housing at a fraction of the cost of the UK market, more businesses are exploring the idea — that includes farmers and the agricultural sector, squeezed for affordable productive land.

UK property agency Brown&Co. has already established a permanent office in Romania to tap into this market and takes farmers and other firms out on fact-finding missions.

Adam Oliver, agri-business consultant and a partner at Brown&Co, says the land market continues to develop from a very low starting point.

“While clearly there are a number of differences between the markets — subject to political stability and economic development — Romania presents an interesting opportunity for properly researched and managed investments,” he says.

The agricultural potential is certainly there: Romania is now the leading exporter of wheat and maize from all EU countries.

Productivity gains in terms of improved seed, fertiliser and crop protection plus improvements in management and access to capital are all driving returns, adds Oliver.

“This, in turn, is increasing the competitiveness for land.”