Panama, famed for its mighty canal, is a conduit for international trade and a country that welcomes companies from all across the world, including ambitious UK exporters. 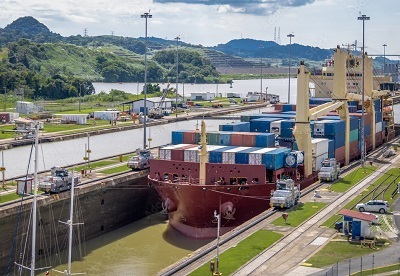 With only 3.6 million people, the Republic of Panama boasts only a modest-size economy, yet it nonetheless plays a key part in facilitating global imports and exports. Home to the world-famous Panama Canal, it is a conduit for a large slice of international trade, providing quick and safe passage between the Atlantic and Pacific oceans.

It is this strategic location — at the crossroads of the North and South American continents and between the world’s two great oceans — that gives the country its significance far and wide. It also makes Spanish-speaking Panama a major hub for international businesses of all kinds.

Each year, approximately 15,000 vessels navigate the eight-hour journey through the canal, which makes its way across the isthmus of Panama. Crucially, it is a journey that cuts around three weeks off the alternative voyage around the southernmost tip of South America via the Drake Passage or Strait of Magellan. As such, this vital maritime transit business and associated trade makes a major contribution to the Central American nation’s economy, as well as its global profile.

The 82-kilometre-long canal is also deemed something of a miracle feat of engineering and has even become a tourist attraction in its own right. The American Society of Civil Engineers has ranked it one of the seven wonders of the modern world, a testament to the human endeavour, determination and achievement required to build it.

This position in the global spotlight has naturally attracted the attentions of international powers, notably the United States, which supported Panama’s secession from Colombia, its southern neighbour, back in 1903. The US also secured a sovereign zone in which to build the canal in the early part of last century, with work commencing in 1904 and completed in 1914.

France had previously initiated work in the latter part of the 19th century, halting activities after engineering and funding difficulties, as well as a high worker mortality rate. The first proposals for a canal across the isthmus, however, can be traced back to the 1500s.

After completing the construction of the facility, now more than a century ago, the canal remained under US control until 1999 when it was taken over by the Panamanian government in 1999. The facility is now managed by the state-owned Panama Canal Authority (ACP).

Business is booming: the waterway shifted over half a billion tonnes of goods over the past year, pocketing huge revenues for the government. The canal handled its highest ever shipping flows during the fiscal year 2021, which ended in September, according to the ACP.

Net tonnage rose 8.8% versus the same period in 2020. This was led by growth in container ships and liquefied petroleum gas tonnage moving through the canal.

Panama continues to invest in its most vital asset as well in order to maximise revenue potential. Its new Neopanamax locks, that debuted in 2016, allow for the passage of ships with 15,000 TEU (tonnes equivalent units) capacity, meaning bigger container ships can pass through.

The country also boasts the world’s largest merchant fleet, in terms of vessels and tonnage, with over 8000 vessels, as a result of listings under the Panama Ship Registry. First established in 1917, it was recognised as the worldwide flag state leader by 1993, underlining the nation’s strong maritime credentials.

But Panama is so much more than a canal and its thriving maritime industry. The country has had one of the fastest-growing economies in the region in recent years and, of course, played a key role in facilitating international trade during the Covid-19 crisis.

At the start of 2022, analysts Fitch Ratings raised Panama’s outlook to “stable” reflecting ongoing improvements in the country’s fiscal position and a “better than expected economic recovery” following the initial pandemic shock. Fitch Ratings expects gross domestic product (GDP) growth to reach 7% in 2022 and 5% in 2023 as it makes up lost ground in the wake of Covid.

Panama’s diverse economy, and its low tax appeal to the private sector, are also expected to play a role in mitigating the risk of any protracted economic slowdown.

The country also benefits from higher commodities prices as a major copper exporter, principally from the Cobre mine, a large open-pit site in Colon province about 120 kilometres west of Panama City, the capital, which is operated by First Quantum Minerals. With 3 billion tonnes of proven and probable reserves, it is one of the largest new copper mines opened globally in the past decade. Copper exports now make up about 78% of Panama’s goods exports.

Panama’s privileged geographic location and a sophisticated logistics infrastructure, which has sprung up around the canal and international trade activities, means the country has become a key regional business hub. But it also boasts an incredible natural landscape, with the largest rainforest in the Western Hemisphere outside the Amazon Basin, as well as crystal clear beaches and turquoise seas, perfect for tourism.

The Chiriqui province in western Panama, bordering Costa Rica and the Pacific Ocean, is an adventurer’s paradise for outdoor pursuits such as hiking, white-water rafting and climbing. It’s also home to the nation’s tallest peak, Volcan Baru, Panama’s only volcano and a landmark feature in the western part of the country.

Culturally, this is a rich and diverse land too, from its rainforests to its exotic beaches, and, of course, reflected in its international population. Panama City is a vibrant, cosmopolitan hub, with a sophisticated services sector and high-quality infrastructure, including Central America's first subway, in addition to its traditional markets and lively nightlife.

There is history to explore as well, from the ruins of old Spanish forts to the indigenous territories deep in the interior. Then there is the infamous Darien Gap region, a treacherous, road-less stretch of jungle on the border between Panama and Colombia, in which migrants and adventurers perish each year. It has been called one of the most dangerous routes in the world.

In modern times, Panama’s long association with the USA makes it more familiar to British exporters perhaps than other territories within the Central America region. It is now deemed one of the most politically stable countries in Latin America, with a dollarised economy since 1904 — it means the US dollar is legal tender, although there is also a national currency, the balboa, which is used for smaller transactions.

As a result of its international connections, English is relatively well known in professional and shipping circles, making it easier for UK firms to connect and do business.

Panama also boasts some of the lowest tax rates in the whole of Latin America, as well as other incentives, which provide a major draw for international corporations. Its VAT rate of 7% is among the lowest in the region, with basic consumption items tax-exempt.

Well-known UK companies with a presence in Panama include Aggreko, Biwater, BT, Diageo, G4S, GSK and JCB, among others. Its large maritime sector, including the world’s biggest ship registry, means there are also multiple ties to London with its deep-seated marine and insurance expertise.

While bilateral import and export volumes are comparatively small, there is an established trade made up of a broad range of products. Key UK exports to Panama include Scotch whisky, chemicals, medical and pharmaceutical products, machinery and other transport equipment.

In the other direction, Panama’s agricultural exports are also on the rise, from bananas to watermelons. According to the Department for International Trade, opportunities for British trade and investment span a range of sectors from energy and infrastructure to education and life sciences.

Security is another high potential area, it says, from CCTV equipment to cyber expertise — Panama is reportedly in the top 10 countries with the most cyber-attacks in Latin America. This, in part, reflects the fact that Panama is one of the best countries for telecommunications connectivity in the world.

Panama has also been ranked as among one of the most attractive countries in which to invest in renewable energy, with projects underway in wind, solar and hydropower among other areas — it already produces over half its energy from hydropower.

In 2021, UK Export Finance launched a new partnership with the Central American Bank for Economic Integration to support the development of larger projects across the region, which encompasses Panama.

There are common challenges cited among those doing business in Panama, however, which include red tape, copyright issues, a slow judicial system, as well as the lack of clarity and transparency in the public tendering process.

The country has also become known as an offshore tax haven — exposed publicly in the so-called 2016 Panama Papers, which unearthed financial secrets linked to prominent wealthy individuals including the then British Prime Minister, David Cameron, and Russian President Vladimir Putin, among other politicians and celebrities across the world.