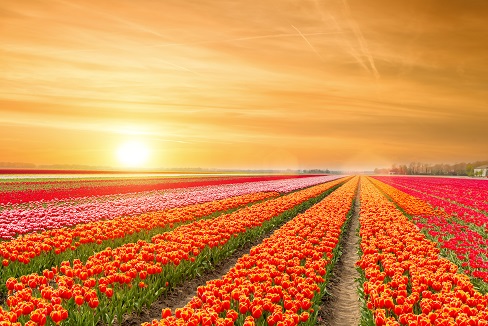 The Netherlands’ location, just a short ferry journey, flight or train ride away from the UK make it a natural starter market for many British exporters.

A small but affluent country of 17 million people, it is home to numerous UK companies and investors — including Anglo-Dutch multinationals Unilever and Royal Dutch Shell; the oil giant is headquartered in the Netherlands and incorporated in the UK.

Among the hundreds of other multinationals now thriving in the Netherlands are the likes of Google, Mitsubishi and India’s Tata, plus other flagship UK names such as BP and Vodafone, reflecting the strong pro-business climate.

On a smaller level too, there is ample scope for trade in what is one of the European Union’s (EU) most progressive and liberalised Member States, and a member of the euro currency zone.

The Netherlands — also commonly known as Holland (which refers to the two provinces of Noord-Holland and Zuid-Holland) — is a key gateway into Europe.

The country is positioned on the north-west continental mainland, close to Europe’s 500 million consumers, and boasts a first-class infrastructure from its primary international airport (Schiphol in Amsterdam) and seaports through to high-speed road, rail and broadband networks.

While Dutch is the official language, English is widely spoken (it is estimated that some 90% of Dutch people speak English) making it a comparatively simple option for first-time exporters.

The economy is nonetheless extremely sophisticated and diverse, encompassing high level engineering and manufacturing, agro-industries, as well as petroleum and chemicals, among others.

Like the UK, there is also an ongoing advance into ultra-modern, high-tech niches, from life sciences and biotech through to the digital economy and creative industries.

This innovation and drive reflects the history of one of Europe’s great nations, a country that has produced arguably the world’s most esteemed painters, Rembrandt and Vincent Van Gogh — a measure of the enduring creativity in this small but highly regarded country.

This has implications for the business sector today. In July, the Netherlands was ranked second in the world in the 2018 Global Innovation Index (GII) after only Switzerland (the UK was rated fourth).

The GII attributes the country’s ranking to its “strong, interlinked business sector that collaborates well with universities.” It also emphasised the fact that the Netherland’s business sector is internationalised via IP licensing exports, a measure of its intellectual prowess.

This has positioned the Netherlands well, say economics experts, in the face of what remains a difficult and challenging global market.

The International Monetary Fund (IMF) estimates that real GDP (gross domestic product) growth is expected to reach a healthy 3.2% in 2018.

“The Netherland’s economic recovery has taken hold,” the IMF said in its last assessment of the country in May, citing “robust domestic demand”.

At home, private consumption has been supported by rising disposable incomes and positive wealth effects from increasing house prices.

On the international front, “net exports have proven resilient to global uncertainties, pushing up the already large current account surplus”, the IMF said.

A large portion of this international trade is conducted with the UK.

The IMF added that the economy is expected to keep its momentum in the coming years.

Like its creativity, many of the Netherland’s core strengths today can be traced back to its long history as a trading and maritime giant and colonial power from centuries before.

This has given the Netherlands a global profile far and above its modest size.

The Hague, the national capital, is home to Europe’s largest security cluster — the Hague Security Delta — which includes the major international courts, as well as high profile bodies such as Europol, the European Cyber Crime Centre and the NATO Communications and Information Agency.

The Netherland’s maritime history has certainly left its mark too.

The port of Rotterdam, the nation’s second largest city, is home to Europe’s most important logistics hub and is a key barometer for trade.

During the first quarter of 2018, container throughput at the port increased significantly by 6.1% in TEU (twenty-foot equivalent unit) terms.

Total freight handled during the same quarter period reached 117.8 million tonnes, a figure that includes container traffic plus commodities such as the throughput of coal, iron ore, scrap and crude oil, among others.

Allard Castelein, chief executive of Port of Rotterdam Authority said the growth in container traffic is “confirmation that Rotterdam is taking an increasingly important position in the maritime connection networks of large shipping company alliances.”

The UK is one of the Netherlands’ most important trade partners.

Nonetheless, Brexit throws up many challenges, with local officials preparing for the worst, should the UK leave the EU with no deal in place.

A little over half represents exports of Dutch-made products to the UK, while the other half consists of re-exports to the UK (such as exports of German-made cars via Dutch ports).

Goods imported from the UK stood at about €22 billion (US$26 billion).

Dutch-manufactured exports to the UK were led by mineral fuels and plastics — underscoring Rotterdam’s importance as a strategic refining hub for Europe — food, agricultural products and flowers, as well as various manufactured goods.

When it comes to investment, the country may yet stand to benefit from the fallout of Brexit.

Spain’s Ferrovial has already announced plans to shift its international holding — which oversees its ownership of various UK airports — to Amsterdam from Oxford to keep the business under EU legislation after the UK leaves the bloc.

Unilever this year also chose Rotterdam over London for its headquarters, although it insisted the move was “not about Brexit”.

The company, which employs 7300 people in the UK and 3100 in the Netherlands, has a turnover in excess of US$50 billion.

Nonetheless, the Netherlands is anxious to see an orderly British exit from the EU next year to preserve its close economic ties.

The process of recruiting extra officials has already begun, mostly in the port of Rotterdam, to prepare for any extra customs or red tape required for British goods to pass through before entering the EU after Brexit.

Maintaining stability and continuity is vital on both sides. In 2017, trade with the UK was equivalent to 3.1% of Dutch GDP, the CBS says. It estimates that some 218,000 Dutch jobs were related to those exports.

Current areas of collaboration include the energy sector, which extends far beyond Shell and even the oil and gas sector.

While North Sea oil and gas production still thrives, pulling in investment from all corners of the world, interest now extends into renewable energy.

Shell’s latest step here is a giant US$1.5 billion offshore wind farm in the Dutch part of the North Sea, where it is working with Swiss investor Partners Group.

The partnership recently secured financing for the scheme, which will have the capacity to power around 825,000 households.

It means work is now scheduled to start in 2019, with production expected in 2021.

The Dutch government is targeting a total of 3.5 gigawatt of wind energy production capacity offshore by 2023.

Petrofac will be responsible for the engineering, procurement, construction and installation (EPCI) of the third and fourth substations (Alpha and Beta).

The UK’s Department for International Trade lists offshore wind as one of the key opportunity areas for British exporters going forward.

Other priority areas for UK firms, it says, include food and drink products and the security and defence sector.

The relationship with the UK goes far beyond trade, however.

There are an estimated 2 million British tourists to the Netherlands each and every year — a large contingent drawn just to the cultural side of Amsterdam, as well as the city’s notoriety with its famed Red Light district — plus some 43,000 British residents living there.

Aside from fine art, and other cultural ties — including popular beer brands Heineken and Amstel, both well-known in UK pubs — both sides are passionate football fans. British fans will remember fondly Dutch icons of yesteryear such as Johan Cruyff and Ruud Gullit.

The Netherlands has even developed an interest in cricket, participating at some major international tournaments — Dutch batsman Ryan ten Doeschate is captain of the Essex county team.