One of the world’s great emerging economies, Indonesia presents high potential for UK exporters in search of new growth markets. 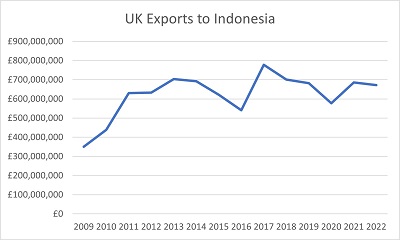 Indonesia’s unique geography — an archipelago of thousands of islands stretching between Asia and Australia — has long fascinated explorers and, more recently, international travellers in search of genuine adventure.

Now, that list also extends to business visitors, attracted to what is already south-east Asia’s largest economy, and a nation with clear ambitions for the future.

Healthy growth rates are likely to deepen this interest in the years ahead.

Indonesia’s President, Joko Widodo, said recently that he is aiming for annual growth of up to 6 per cent during the remainder of his second term in office, through to 2024.

The International Monetary Fund (IMF) is being somewhat more cautious, with a forecast for 2020 of 5.1 per cent — still significant compared to the meagre growth in Western Europe.

Indonesia is also a huge market for exporters: with around 266 million people it is the fourth most populous country in the world, another prime attraction for businesses across a roster of industry sectors.

Though its people are scattered right across this diverse island chain, the majority are located on the islands of Sumatra, adjacent to Singapore and Malaysia, and Java to the south, home to the bustling metropolis capital city of Jakarta.

Java’s numbers alone, however, stands at some 141 million people, over half the nation’s population.

Inevitably, this geographic spread means that Indonesia is a hugely diverse country in every sense, with more than 300 local languages spoken and a mix of people that spans from middle class city dwellers to isolated hunter gatherers on some of the more remote islands.

The country boasts the world's largest Muslim population too, though it also has significant Christian, Hindu and Buddhist populations as well.

But much has changed through the decades and the largest economic sector is now manufacturing and processing, which contributes around 24 per cent to gross domestic product (GDP).

Major industries now include oil and gas, mining, timber, fishing, paper, cotton and tourism, though in more recent times, growth has fostered the advancement of a modern financial sector and other sophisticated services.

That includes the arrival of the likes of UK-based bank Standard Chartered, which has now been established in Jakarta for decades, helping to underpin Indonesia’s growth in the modern era, as well as strategic divisions of Barclays and HSBC.

Indeed, the UK presence is strong across many areas in Indonesia, despite the lack of historical association, with a strong deep-rooted portfolio of investments across the economy.

Trawling back through the history books, Indonesia was a Dutch colony until it gave in to an independence struggle in 1949.

Since then, it has gone on to become one of the world’s big emerging economies, though it has been anything but plain sailing.

As well as navigating the headwinds of the global economy, it has also experienced attacks by Islamist armed groups, most notoriously the 2002 Bali bombings that left over 200 dead, mostly foreign tourists, as well as various demands for independence in several provinces.

Testament then to Indonesia’s people for their toil in hauling the country on to a more prosperous path.

Aside from the banks, major British names with a presence in Indonesia include the big oil companies, Shell and BP, a stakeholder in the giant Tannguh liquefied natural gas (LNG) export plant.

Premier Oil is also expanding its geographic footprint, landing an interest in two more Andaman Sea blocks, north east of Sumatra, where it is currently working on plans for a two well drilling campaign in 2021 as Indonesia’s hydrocarbon search widens.

But British commercial interests in Indonesia run much deeper than the multinationals.

Bilateral trade amounted to around US$2.7 billion in the year to March 2019, and, beyond Brexit, there is huge scope for increased trade and investment.

Both sides have already expressed a willingness to cultivate closer trade relations in the years ahead.

Last October, the two countries kicked off a new round of exploratory trade talks, which started for real in London in December.

The goal is to explore new opportunities and identify priority sectors, as well as seek ways to lower or eliminate trade barriers.

It is similar to reviews underway with other large emerging markets, such as India, Brazil, and China.

Given the established links, Indonesia already values UK goods and services and, as a member of the Association of South-East Nations (ASEAN), it offers even broader market appeal.

UK-ASEAN trade was at a 10-year high of £37.2 billion in 2018, with both sides looking forward to expanding this further in the post-Brexit era.

This included a visit to the UK’s new mission to ASEAN, established in Jakarta, which aims to deepen the country’s engagement with the 10 member states; Jon Lambe was last year appointed as the new UK ambassador to ASEAN, based at the Indonesian mission.

A thriving UK-ASEAN Business Council is also well supported by major British names, across a range of sectors, from recruitment firm Michael Page and education specialists Pearson, through to financial heavyweight Prudential and trading group, Jardines.

Its Business Confidence Index 2019, a survey of European investors domiciled in Indonesia, reflects the overall confidence foreign companies feel toward the country.

It reported a “very positive” outlook on the political environment and a positive trend on the regulatory and legal environment, key stability factors for encouraging more trade and investment.

It also noted that business activity is widening into less fashionable areas, such as Sumatra and Sulawesi, in addition to major development hubs like Java and Bali.

There is a further context to the relationship as well, with the UK a major development partner across Indonesia and the rest of south-east Asia.

Each year, the UK government provides over £300 million Official Development Assistance (ODA) to ASEAN to support economic and social development, tackle climate change and provide humanitarian assistance following disasters, through a range of initiatives and programmes.

In the other direction, there are some 40,000 students from ASEAN countries studying at UK universities, while the British Council has trained over 36,000 English language teachers.

This is reflected in the use of English in business and tourism circles across major centres in Indonesia.

Perhaps Indonesia’s longer term potential is hard to pinpoint given the scale and sheer diversity of the country and its countless islands.

Indeed, travel group Lonely Planet describes it as “a kaleidoscope of a nation”; sprawling along the equator for 5,000 kilometres, it is a place that defies homogenisation.

As well as its high business potential, this also extends to tourism, with around 390,000 British nationals visiting Indonesia every year, according to FCO figures.

Its domestic market, as well as that of ASEAN, is hugely appealing as the nation grows and becomes more affluent: more than half of all people now live in urban areas, aspiring to a modern lifestyle and rising purchasing power.

Nonetheless, poverty is still widespread across the country, which presents a major challenge for the government and the development finance institutions.

The Asian Development Bank (ADB) finances a whole swathe of Indonesian investments across energy, skills development and irrigation, among others, as well as supporting structural reforms in the areas such as public sector management and the financial industry.

Among other challenges, the ADB says building the skills of the workforce, along with adequate social protection systems, will be vital to develop Indonesia into a more modern industrial and service-oriented economy in the years ahead.

These are ongoing problems that the government will hope to tackle as it nurtures the economy hand in hand with development groups and overseas investors.

It has provided the backdrop for success for many UK firms already, with many businesses now thriving as Indonesia’s economy expands.

The company, which is purely focused on the south-east Asia region, has a number of assets on its books and is keen to expand further.

“We are excited by the opportunities we see to build a business of scale in South East Asia,” James Menzies, its chief executive officer, commented earlier this year.

The next step for UK investors and exporters is to widen and extend their presence across this fascinating land, into new markets, new sectors, and to support the country’s long-term prosperity plans.