EU member Finland is one of the world’s most prosperous and advanced countries and presents tremendous opportunity for forward-thinking UK firms. 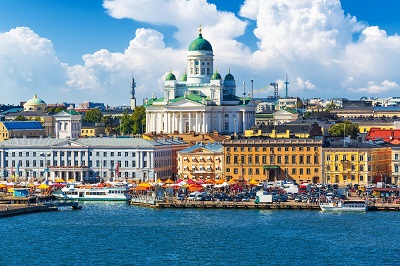 One of the Nordic countries, yet very much unique and independent, Finland is one of northern Europe’s most liberal, progressive states.

A sparsely populated country of 5.5 million people spread over a land mass of 338,000 square kilometres, it is home to vast wildness areas that include breathtaking natural parks and unspoilt forests as well as vibrant cities.

That includes the capital Helsinki, in the south of the country, a cosmopolitan hub and the entry point for most foreign arrivals, as well as a maritime gateway to the Baltic Sea.

Key industries include electronics — this is the home of mobile phones giant Nokia — as well as machinery, chemicals, vehicles and other engineered products.

It also boasts plenty of timber and freshwater resources, as well as some mineral deposits.

Finland’s trendsetter status dates back over a hundred years, when its parliament became the first to adopt full gender equality.

In 1906, it granted men and women both the right to vote and also to stand for election.

Yet the country only achieved full independence from Russia in 1917 (the year of the Russian revolution).

This relationship has always been an important one, though not always positive.

Finland fought against the Soviet Union in the Second World War and, after its defeat, had to tolerate strong influence from Moscow until the end of the Cold War.

As well as its partners in Scandinavia, neighbouring Sweden and Norway, Finland also maintains a deep connection with the nearby Baltic states of Estonia, Latvia and Lithuania.

Giant ferries plough the waves carrying tourists and trade daily to nearby Tallin, the Estonian capital, which is located just 80 kilometres away; the Port of Helsinki is one of the busiest passenger ports in Europe.

As well as opening the vote to all a century ago, Finland boasts many of the other core values demonstrated across Scandinavia and the Nordic region, such as high social welfare, freedom and public safety.

Indeed, it was voted the world’s happiest country to live in by the UN’s World Happiness Index for the third year in a row in March 2020 — with Helsinki ranked the happiest city in the world.

The report explores how social, urban and natural environments combine to affect happiness.

“A happy social environment, whether urban or rural, is one where people feel a sense of belonging, where they trust and enjoy each other and their shared institutions,” said John Helliwell, one of the report’s editors. “There is also more resilience, because shared trust reduces the burden of hardships, and thereby lessens the inequality of wellbeing.”

All of the other Scandinavian and Nordic states — Denmark, Norway, Sweden and Iceland — all featured in the top 10 as well.

Finland’s high level of stability and affluence — and overall happiness — means it consistently scores well on all international credit ratings.

Despite the current level of uncertainty sweeping the global economy, ratings agencies have long recognised Finland’s position and progressive policies.

While the effects of the coronavirus pandemic are still to play out — an event with ramifications for all — it highlights Finland’s overall economic strength and international credibility.

Moody’s said its credit score reflects the strength of key institutions, a track record of prudent fiscal policy and transparency, as well as a relatively moderate debt burden.

While growth will be impacted in the wake of the coronavirus pandemic and all its unknowable effects, the country is perhaps better placed than most to withstand any shocks that might come along.

As the pandemic fanned out across Europe and the wider world during 2020, the Bank of Finland noted in mid-March that the economy could contract by as much as 4% this year — though that may yet prove to be a conservative estimate.

Like other economies, the Finnish Government is making state help available to support businesses and households, which will have a knock-on effect on its borrowings.

Gross domestic product (GDP) growth was already weak: at the end of 2019, the Government was anticipating annual growth of just 1 to 1.2% between 2020 and 2022, held back by an indifferent international outlook.

After the events of recent times this seems almost certain to dip, though accurate projections remain nigh on impossible for the time-being.

Finland’s largest export market, Germany, like all other countries, is expected to face its own challenges, which will again most likely dampen down demand.

Nonetheless, Finland’s comparative strength and stability are good attributes to have during times of hardship and adversity.

No doubt these factors will play a role in its recovery process in the coming months and years ahead.

As well as traditional industries, such as forestry, the country is a leading technology hub, with access to top talent, a vibrant start-up scene and a unique research and development (R&D) ecosystem.

The World Bank ranks Finland among the 15 best business environments in the world, citing a level of political stability and economic continuity not seen in most countries.

It also commonly scores as one of the least corrupt nations in the world in international surveys.

As well as a highly skilled and educated workforce, and a first-class infrastructure, the Government is keen to champion business and investment.

That’s reflected in its tech start-ups and track record in IT innovation, including a commitment to data security.

Some of the key protocols behind today’s strongest encryption systems were invented in Finland in the early 1990s.

That includes the SSH protocol, one of the world’s most widely used encryption protocols.

Today, its numerous cyber security companies are actively developing new state-of-the-art solutions to protect the digital world in the future.

Finland is also known as a leader in mobile games development — it is the development hub that unleashed Angry Birds and Clash of Clans to the world, along other iconic titles.

As well as technology, Invest in Finland, the nation’s investment promotion agency, is promoting opportunities in agri-tech, energy, food and beverages, health and wellbeing and the maritime sector.

Flagship companies in the maritime industry include engine maker Wartsila, which produces a host of power plants for vessels and other applications.

It is also one of the nation’s technology leaders, pioneering in the development of environmentally friendly solutions for engines, ships, and in other areas.

There are plenty of other Finnish companies active in the UK market as well, not just the likes of Nokia, Warsila and global elevator maker Kone, but a host of smaller, ambitious IT firms too.

Many are in the process of strengthening ties in the UK market in the wake of Brexit.

In the other direction, famous British names in Finland include high street fashion chain Next.

And exports are thriving in both directions.

Total bilateral trade in goods and services between the two sides was worth £5.7 billion in the year leading up to the end of March 2019.

Both exporters and investors are represented by an active Finnish-British Chamber of Commerce and other trade groups.

A dozen UK firms visited Finland in February on a trade mission led by the Society of Maritime Industries, taking in Helsinki, Turku and Rauma, and visiting local players such as Meyer Turku, Royal Caribbean Cruises, Marine Alutech and Helsinki Shipyard.

One of the visiting UK firms was Chelsea Technologies, a designer and manufacturer of high-quality ballast water and scrubber wash water compliance monitoring systems.

“We hope to see Chelsea systems employed on more of these vessels in due course,” he said.

Climate change and the melting of ice in the Arctic has fuelled demand for more ice-class vessels in the commercial shipping and transport sector as well as in the region’s emerging oil and gas industry, with previously inaccessible northern routes now becoming more navigable — and Finnish firms are at the forefront of these developments.

Despite the country’s harsh climate and long, dark days and nights through the winter, these have helped shape its appeal as a tourism destination and its present-day quality of life, with a large, expansive interior that remains untouched, still home to reindeer and bears.

This is also the destination for Christmas season Lapland visits to meet Santa, which attracts thousands of Britons to the country each year.

For businesses too, as a jumping-off point into the emerging EU Baltic States and north-western Russia, Finland is a safe harbour for exporters looking to access wider markets across northern Europe.