One of South America’s most prosperous countries, Chile is a market British exporters should take the time to explore. 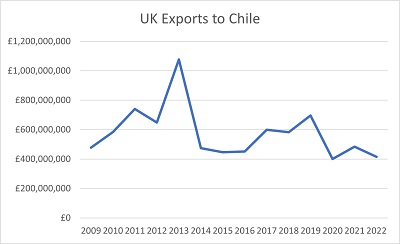 The king of copper

Chile, famed for its wines and vast copper deposits, is a country far distant and remote from the UK geographically, yet it is one with clear, established links and obvious potential for the future.

Indeed, while wine has acted as of Chile’s unofficial ambassadors across the globe, it also alludes to the country’s respectable image and the goodwill it receives overseas, a reflection perhaps of its relative prosperity.

One of Latin America’s richer nations, Chile has likewise enjoyed a comparatively stable political history compared to many of its peer states, which again has further nurtured international goodwill.

The country is similarly a multi-ethnic society, including people of European and Indian ancestry, furthering its reaches into overseas markets.

Apart from its esteemed vineyards, and eye-watering coal deposits — the world’s largest at 170 million metric tonnes — one of the most notable things about Chile is its unusual geography.

Some 4,300 km long, but on average just 175 km wide, it occupies a long sliver of land stretching north to south, along much of the western flank of Latin America.

This vast length brings with it a hugely varied terrain and climate, from the world's driest desert in the north, the Atacama, to a Mediterranean-like centre, ideal for grape growing, and an icy south, filled with stunning glaciers, lakes and fjords.

Chile’s economy in 2020 is underpinned by key export commodities, not only from the vineyards, but also from its rich mines.

It is the world’s number one copper producer, and home to six of the ten largest copper mines in the world.

But it has not all been plain sailing since the country achieved independence from Spanish colonial rule in 1810.

Despite economic gains in recent times, there is a darker cloud over Chile’s modern history with the 17-year rule of General Augusto Pinochet, the man behind one of the bloodiest 20th-century dictatorships.

Pinochet’s regime left more than 3,000 people dead and missing in the wake of his 1973 coup and subsequently reign of terror.

Much has changed since Pinochet was replaced as leader in 1990, however, with Chile rebuilding its tarnished reputation worldwide ever since.

Now under the stewardship of conservative President Sebastian Pinera, the country is seeking to grow and diversify its economic base, tackling key issues such as inequality and poverty.

Indeed, this sense of economic injustice has in the past year triggered mass protests, putting pressure on a government seeking to elevate current modest growth levels.

Gross domestic product (GDP) growth is estimated to reach 3 per cent in 2020, according to International Monetary Fund (IMF).

That could weaken if demand is stifled for its key export commodities though.

Protests in October 2019 were sparked by an increase in public transportation fares, but ultimately reflected broader social discontent with high living costs, the quality of public services and incomes inequality.

Still, the government maintains a strong fiscal position, with a debt-to-GDP ratio of less than 28 per cent — the envy of many Western nations — and substantial financial buffers gleaned from its export-driven economy.

Despite plans to diversify and modernise the economy, Chile’s mining industry, already huge in scale, is central to hopes for the future, and likewise presents opportunities for UK involvement.

As well as copper, the country is presently the world's leading producer of rhenium, the second largest producer of lithium and molybdenum, and sixth in terms of silver output.

Globally, it accounts for around 55 per cent of all international rhenium output and about 28 per cent of the world’s copper.

And more is to come, according to the Chilean Copper Commission, which says that 44 mining projects — together representing investments worth US$72.5 billion — will start operations through to 2028.

The northern Antofagasta Region leads the list, gulping around 34 per cent of the total expected investment, with nearly all going to fuel world demand for copper.

Demand for copper, mainly used in power and construction, is expected to boom in the coming years because of its use in electric vehicles, which need twice as much of the metal as those with internal combustion engines.

That still hinges on a thriving global economy, however, an uncertain prospect in the wake of the coronavirus and its impact on China’s mighty production machine.

Still, the coal sector continues to present big opportunities for all.

In one recent landmark deal involving UK investors, Japan’s Mitsubishi Materials Corporation bought a 30 per cent stake in Mantoverde copper mine, which has 2.1 million tonnes of copper reserves.

The site is owned by a consortium led by British investment company Audley Capital Advisors and Orion Mine Finance Group, which control Mantos Copper.

“This transaction is a step forward in Mantos Copper’s strategy to expand and extend the life of our high quality copper assets, while lowering its position in the cost curve,” Mantos board chairman John MacKenzie said in a statement after the deal.

Yet while Chile’s mining industry remains vital to the economy, it also highlights its overall fragility.

In the early months of 2020, Chile’s currency, the peso, was rattled after copper prices fell on fears that lower demand from China linked to the coronavirus spread could cause a supply glut.

Indeed, the protests over poverty and inequality also highlight the uneven economy.

Moody’s said in a bulletin on a March 2 that the effects of ongoing violent protests since October 2019 and any new upsurge in violence this year could weigh on Chile’s economic growth through to 2021.

It could trigger repercussions elsewhere throughout the economy as well, it noted.

“Although Chile’s corporate, banking and government sectors for the most part can withstand slower growth, if demands for reduced working hours and other social concessions are implemented, labour costs in many consumer-related sectors would rise,” Moody’s said.

Further analysis by Fitch Solutions expects this to drag on construction activity this year, a key barometer of economic wellbeing.

In the first quarter of 2020 it revised down its forecast for Chile’s construction industry this year, citing falling private investment, again largely due to uncertainty amidst the recent unrest.

It did note, however, that robust government stimulus spending will continue to provide a rich stream of work, good news both for local contractors and potentially foreign partners.

In December 2019, the government announced its Employment Protection and Economic Recovery Plan, with a US$5.5 billion portfolio of investments.

It includes US$380 million for the reconstruction of the Santiago Metro, which suffered severe damage during civil unrest in the latter months of 2019, leaving 80 of 136 stations in need of repair.

Also included are US$921 million for other reconstruction projects, including public spaces in Santiago, US$480 million for regional investment projects, US$350 million for housing construction, subsidies and neighbourhood improvements, and US$1.5 billion for the Santiago-Melipilla rail project.

Overall, the underlying picture facing Chile’s construction segment remains positive, with Fitch Solutions maintaining a “broadly positive” outlook over the longer term, “underpinned by our view that Chile will remain among the most attractive markets in Latin America, supporting a recovery in private investment.”

There are other reasons to be bullish as well, even in the face of uncertain demand for export commodities and the threat to Chile’s economy from coronavirus.

A Spanish-speaking market of 19 millions people, Chile is also a part of Mercosur, the Latin American trade bloc, opening up a much larger market of 553 million.

The UK has enjoyed a long trading and diplomatic history with the country for many years, based on shared values, including a commitment to democracy and the development of open markets and commerce and a generally pro-business sentiment.

Chile is the UK’s third-largest trading partner in Latin America — impressive given its comparatively small size compared to the likes of Brazil, Argentina and Colombia — and deemed a great first stop for companies new to the region.

Total trade in goods and services between Chile and the UK for the year ending June 2019 was worth £2.2 billion, which marked a 10.7 per cent increase on the same period in 2018.

Major opportunity areas for UK companies include the large mining sector, where many British firms are already active, and also in the development of new government-led infrastructure.

Chile is embarking on various big programmes, including new railways and the adoption of smart city technology, as it seeks to transition to a higher-value economy.

That also includes a massive roll-out of non-hydro renewable energy with both wind and solar electricity capacity set to increase significantly in the decade ahead.

Behind this is a plan to phase out coal-based generation by 2040.

President Pinera last year announced plan to phase out coal within the next 20 years, with eight of its 28 coal-fired power plants scheduled to close by 2024.

Then there is the country’s almost untapped tourism potential, not only as a wine destination and a place for adventure travel, but also for culture, history and a safe introduction to Latin America generally.

As well as the Andes mountains, the penguins and the Magellan Straits to the south, its tourism offer also includes the mystique of Easter Island, which Chile annexed in 1888; approximately 80,000 British nationals visit Chile each year.

It may not be the easiest destination to get to — with a flight time of 14 hours 40 minutes, Santiago is British Airway’s lengthiest direct, non-stop route — it is worth the effort.