A continuity trade pact, with the promise of a bespoke new deal in 2021, means Canada is ready to do business with UK exporters. 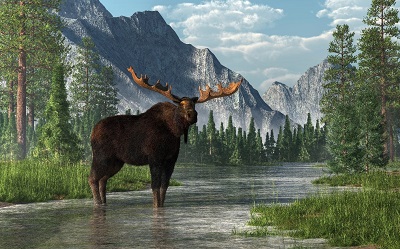 The land of maple syrup, moose, and ice hockey, Canada holds an identity all of its own, despite its close proximity to the USA, its only land neighbour, to the south. It also boasts strong historical links to the UK and remains a member of the Commonwealth, which underpins a healthy trading and commercial relationship today.

The Queen is an ever-present feature on the Canadian dollar bill, while UK culture — from music and cuisine, to sports and TV shows — sits deeply ingrained in the local consciousness. Many Canadian families originate from the UK, and immigration remains a key feature in growing what is a small population, just 37 million, relative to Canada’s vast size.

It means bilateral business is strong: British firms export to Canada everything from electric cars to sparkling wine, with scope for much more to come. The second-largest country in the world by size, Canada reaches east to west, from the Atlantic to the Pacific coast, and up from the US border deep into the Arctic Circle; only Russia occupies a greater land mass.

There are close ties with the Francophone world too, with English and French the nation’s two official languages and both spoken widely. Quebec — home to the city of Montreal, which hosted the 1976 Olympics — is the large French-speaking province in the country’s east, with most of the rest of Canada speaking English.

Many road signs and notices are in both English and French; that’s commonly seen in the English-speaking neighbouring province of Ontario, home to Canada’s biggest city, Toronto, its primary commercial hub and home to around 3 million people.

But, despite its comparatively small population overall, Canada certainly punches above its weight in economic terms. On top of a sophisticated services sector, the country also sits on enormous oil and mineral reserves and is a major world exporter of energy, and a strategic supplier to the USA.

Calgary, in the province of Alberta, famed as a rodeo city, is now the nation’s energy capital, a dynamic business hub in its own right. Other major cities, such as Vancouver on the Pacific coast — said to be one of the most desirable places in the world to live — and Ottawa, the national capital, in south-eastern Ontario, represent small high-density urban areas in what is mostly a vast wilderness of a country. Canada is big, beautiful and ready to do business with the UK.

In December 2020, the UK and Canada struck a continuity trade deal to ensure the smooth flow of goods and services between the two sides after Brexit. Annual bilateral trade is worth around £20 billion (US$26 billion), with the UK representing Canada’s most significant commercial partner in Europe and its fifth largest trade partner overall globally.

The new agreement essentially rolls over current EU-Canada trading arrangements in order to begin negotiations on a new, bespoke UK-Canada trade deal in 2021.

According to the International Department of Trade, it will support the British automotive manufacturing and food and drink industries, which between them provide jobs for more than half a million people across the UK. Overall, an estimated £42 million (US$55 million) tariff burden on UK exports has been saved.

“The UK is bonded by history, culture and transatlantic trade with our friends and allies in Canada,” she said, adding that the deal “marks another step towards membership of a group of like-minded nations, the Trans-Pacific Partnership.”

This is a high-standards agreement of 11 Pacific nations, membership of which would deepen market access for UK businesses, and “help turn us into a global hub for tech and services trade, and strengthen the global consensus for rules-based free trade,” according to Truss.

The new deal means tariff-free trade on 98 per cent of goods that can be exported to Canada including beef, fish and seafood and soft drinks — in 2019, the UK exported £344 million (US$450 million) worth of agri-food products to Canada.

Without the continuity agreement, Canadian food products such as maple syrup, biscuits and salmon could also have been more expensive for British consumers. The rollover deal likewise provides zero tariffs on UK car exports to Canada, worth £757 million (US$993 million) in 2019 — without an agreement, Canada’s standard tariffs on cars of 6.1 per cent would apply.

While the deal mainly continues the existing EU-Canada agreement, the next trade pact is expected to be more tailored, with the potential to go further in new areas like digital trade, women’s economic empowerment and the environment.

It’s not hard to find examples of well-known UK firms active in Canada, from banks such as HSBC to oil giants Shell and BP.

In Canadian retail malls, familiar brands include The Body Shop, Next, Marks & Spencer, among others. British supercar maker McLaren Automotive, which combines leading-edge technology with personalised luxury, sold its first car in Canada in 2012. In just eight or so years, it has now sold more than a thousand of its flagship vehicles.

McLaren Automotive — the largest part of luxury automotive, motorsport and technology company McLaren Group — welcomed the continuity trade deal as it grows and expands its business there.

The brand, represented locally by Pfaff Automotive, now has a retail presence in key Canadian cities including Toronto, Montreal and Vancouver.

“As an innovative British-based bespoke manufacturing business exporting to meet a growing demand for McLaren’s supercars among Canadian buyers, [the rollover deal] provides added certainty and continuity both for us and our Canadian retail partners, customers and employees as we continue to build our presence in this key global market,” said Tony Joseph, regional director for the Americas at McLaren Automotive.

It sets the scene for the UK-Canada relationship to continue to grow and prosper, across a multitude of industries, including sensitive and strategic sectors like defence and security and space technology.

Both countries are NATO allies and, after the USA, the UK is Canada’s most important market for defence products and services.

Well-known Canadian firms in this niche include Bombardier Aviation which, until 2019, owned an assembly plant in Belfast in Northern Ireland.

While the trade environment looks steady, Canada, like other world economies, has nonetheless been rocked by government-induced lockdowns in the wake of the coronavirus outbreak.

This has knocked back economic growth during 2020, and eaten away confidence, though hopes remain of better things in 2021.

By December 2020, overall economic activity was down by about 5 per cent on pre-pandemic levels earlier in the year, according to data from Statscan.

Canada’s broader macroeconomic recovery is gaining steam, however, especially with the forthcoming rollout of coronavirus vaccines in the first quarter of 2021, according to Fitch’s Global Economic Outlook, published in December.

“Canada’s extraordinary fiscal and monetary policy supports have effectively buttressed the national economy through pandemic restrictions and should help bolster the recovery further in 2021,” the Fitch report notes. It also cites strong export recovery as a key factor in dampening the impact of any recession.

Tourists the world over will also be hoping that any recovery in 2021 paves the way for the return of international travel.

Canada’s vastness means it offers endless possibilities for adventure, from snowboarding in the Rockies or canoeing along the Pacific shoreline, to driving a deluxe motorhome across the empty roads of the plains.

The trip from east to west can take anything from a few days to a week depending on how fast you want to drive.

From its furthest points, that means driving from St Johns in Newfoundland, on the Atlantic side, to Beaver Creek in Yukon Territory, in the west.

Canadian culture has also evolved its own unique flavour, despite all of the many influences from the UK, the USA and around the world. As well as ice hockey and baseball matches, that can mean anything from classy theatre breaks in downtown Toronto, to a wild ride at Canada’s Wonderland theme park. World-renowned cultural highlights include the Montreal Jazz Festival and the Toronto Film Festival.

Then there’s Mother Nature itself to explore, perhaps Canada’s greatest asset of all. The sheer emptiness of the country means it has some of the best national parks in the world, offering everything from pristine lakes, rivers and forests, to mountains and glaciers.

It’s the perfect environment for wildlife to flourish: this is the land of bears, moose, and even polar bears in the far north. The largest national park of them all is Wood Buffalo, which is bigger than Switzerland, and covers parts of northeastern Alberta and into the southern part of the Northwest Territories.

At the top of Canada sits Nunavut, the largest and newest province, that was separated from Northwest Territories only in 1999. Its sprawling, sparsely-populated territory and islands are often only accessible by plane or boat, but it offers a unique glimpse into the world of the indigenous Inuit people. Its capital, Iqaluit, on Baffin Island, houses the Nunatta Sunakkutaangit Museum, a display of Inuit artwork. Indigenous peoples make up around 4% of Canada’s total population.