Australia may be far away — it is one of the furthest destinations from the UK — but it is also the world’s 14th largest market and one of the most familiar to British exporters. 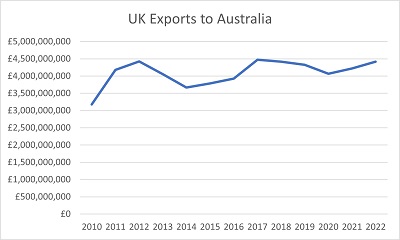 Doing business Down Under

Home to only 25 million people, Australia is nonetheless big in size. The world’s sixth-biggest country in terms of land mass, with a vast desert-like interior, it is home to large amounts of natural resources, from coal and iron ore to oil and gas.

This has helped to make Australia a major global exporter and drive ongoing economic diversification. The country now ranks as one of the most desirable places to live in the world, with an increasingly affluent and sophisticated market-driven economy.

Though its performance has been affected by the Covid-19 pandemic this year — the International Monetary Fund (IMF) projects real gross domestic product (GDP) to shrink by minus 4.5 per cent in 2020 — all the fundamentals are there for long-term success.

This places UK exporters in a strong position, given shared interests, history and common ties. A former British colony, and still a member of the Commonwealth, Australia’s links with the UK run deep on all levels, from language and family ties, to business and finance, and even out onto the sporting field. The Ashes — a cricket tournament between Australia and England that dates back to 1882 — is one of sport’s greatest rivalries.

These connections run deep in the tourism sector as well. Despite the 22-hour flight time from London to Sydney, Australia’s largest city, over half a million Britons make the journey each and every year. In 2019, the UK was Australia’s fourth largest inbound market for visitor arrivals and third largest market for total visitor spend. Iconic attractions include the Sydney Harbour Bridge and Sydney Opera House, plus Uluru, or Ayers Rock, a massive sandstone monolith in the heart of the Northern Territory of sacred significance to indigenous Australians.

In the other direction, arrivals into the UK make Australia the 10th largest inbound market for visits globally, and fifth in terms of most valuable for spending. Almost half of travellers are in the UK visiting friends and relatives, underlining the shared history between the two sides. Prior to the Covid-19 pandemic, Visit Britain, the official tourism agency, estimated that arrivals from Australia would grow by over 18 per cent over the coming five years.

While the tourism sector has taken a knock in 2020 and will take time to recover, Australia’s economic fundamentals remain strong and appealing for UK businesses seeking to navigate an uncertain post-Brexit future. Famous big British brands already present in the market include the likes of BP, Virgin, GlaxoSmithKline and BUPA, among others. For these and other entities, the Australian market also presents a gateway to the dynamic Asia Pacific region as well. In the UK, many Australian companies, from oil explorers to mining firms, also choose London for an international stock market listing to gain access to funding and a wider market.

Again, while the health pandemic of 2020 has taken the sheen off Australia’s economic performance — the lockdown strategy has hardly benefited any economy worldwide — there are plenty of reasons to be optimistic going forwards. That includes a record trade surplus for the 12 months ending in June 2020, amid surging exports to China.

Reserve Bank of Australia (RBA), the nation’s central bank, has nonetheless predicted a bumpy road to recovery ahead, as it moves on from the Covid-19 crisis. RBA Governor Philip Lowe said in August that the economy was experiencing its biggest contraction since the 1930s, but still sounded a note of cautious optimism. “As difficult as this is, the downturn is not as severe as earlier expected and a recovery is now underway in most of Australia,” he said.

Although the country’s relationship with China has mirrored that of other Western allies in recent times, including the UK and the USA — typified by rising tensions over trade and a sense of Beijing’s heightened international ambitions — exports are as strong as ever.

Australia’s shipments of iron ore to China, the world’s leading steel producer, from the export hub of Port Hedland hit record levels in 2020.

The world’s largest bulk export port authority, Pilbara Ports Authority (PPA) — which oversees the Port of Port Hedland — reported in July that it had delivered a total annual throughput of 717.2 million tonnes (Mt) for the 2019/20 year — up three per cent from the previous year and a new record for the authority.

All of its ports, which also include Ashburton and Dampier, continued to operate throughout the Covid-19 crisis and remain essential to supporting the broader economy. “The ports are critical to Western Australia’s economic recovery from the pandemic,” noted PPA chief executive Roger Johnston.

A recent economic study found the Port of Port Hedland and its supply chain contributed 20 per cent of Western Australia’s gross state product and underpinned one in every 12 jobs across the state.

Aside from iron ore, other main exports include coal, oil and gas, gold, aluminium, copper and food exports, such as beef and other meat products.

This strong export performance from Western Australia — the sparsely populated, but resource-rich western flank of Australia, which includes the city of Perth — has become even more significant amid challenges elsewhere.

Other industries such as the retail and services sector, and of course, transport, have been hit hard by reduced demand in the wake of the pandemic, affecting more densely-populated areas such as New South Wales and Victoria, home to Sydney and Melbourne respectively.

Navigating this uneven picture presents a huge challenge for government in the coming year, not to mention businesses. For UK exporters, it also throws up a myriad of opportunities, especially in light of Brexit and a potential reshaping of relations via a new free trade deal.

With the beginning of UK-Australia post-Brexit trade negotiations starting in June, the City of London Corporation recently released a report outlining how a free trade pact and other mechanisms such as regulatory cooperation could benefit the financial services sector.

And in a ‘virtual’ trade visit in July, the Lord Mayor of London, William Russell, showcased opportunities for UK firms in green finance and financial technology (fintech), urging closer collaboration in the the post-pandemic global economic recovery.

The UK government estimates that a free trade agreement could lead to a £900 million (US$1.2 billion) increase in UK exports to Australia, while the UK is already Australia’s seventh-largest trading partner.

The Lord Mayor of the City of London said it was time to begin a “new chapter” with one of the UK’s oldest and closest partners. The City of London Corporation report also flagged Australia as a “unique opportunity” for UK-based firms — with asset managers gaining access to the world’s fourth largest pensions market and a changing regulatory landscape opening the market up to foreign players. Similarly, the Australian government has strengthened its commitment to become the regional leader in payments technology, an area in which UK expertise could play a key role.

Australian investment in the UK is dominated by the financial services sector and includes the likes of Macquarie Bank, Commonwealth Bank, ANZ Bank and National Australia Bank.

For exporters of other goods and services, there are many similarities to the UK market. According to the Department for International Trade, if a product or service is successful in the UK, then it is likely to be successful in Australia. Around half of the total population live in one of four major cities — Sydney, Melbourne, Brisbane and Perth — making it easy to prioritise market research. Major export items from the UK include machinery and vehicles, pharmaceuticals and electronic equipment.

And it’s not hard to find examples where British firms are making a difference to Aussie consumers, from the food sector to infrastructure.

That includes smaller companies such as East Midlands-based Bradbury & Son, which is selling its cheeses in Australian supermarkets Coles and Woolworths. British online supermarket pioneer, Ocado, is also partnering with retail giant Coles to bring its world-leading technology and transform online shopping and delivery for Australian customers.

The development of physical infrastructure is another area in which British firms are contributing, from financing to actual construction. UK-based construction company Laing O’Rourke and architects John McAslan + Partners both played a key role in upgrading Sydney’s central metro station to improve the commuter experience.

There are numerous examples of how UK technology is shaping Australian life as well. Motorists are having smoother journeys thanks to British firm CitiLogik, whose world-leading technology is revolutionising traffic analysis in Australian cities.

Consumers are also saving money through the UK’s Revolut technology by avoiding hidden fees and hefty exchange rate markups via its breakthrough app. Australia was chosen as an early overseas market for the tech firm, launching in 2019.

In the other direction, Australian exports to the UK are just as resilient. The country’s wine exports to the UK increased by 3 per cent to AU$383 million (US$272 million) in the 12 months ended 30 June 2020, according to data from Wine Australia. It is estimated that one in five imported bottles of wine consumed in the UK is from Australia. Scotch whisky is also bought and consumed widely across Australia.

Likewise, Australia’s two largest mining companies, Rio Tinto and BHP Billiton Limited — both pillars of the nation’s economy — have a direct presence in the UK market.

Despite all the ups and downs of 2020, the UK and Australia partnership remains as robust as ever.